Night! With Who-ville brimming with joyful anticipation of Christmas, high above in the chilly mountains, the Grinch shares no such warmth for the holiday. Why this green meanie has hatched a plan to do away with Christmas once and for all! Featuring animation by the legendary Chuck Jones, bring home this heartfelt reason for the Yul-tide season.

Christmas At Holly Lodge When a major developer sends Evan to evaluate the value of Holly Lodge, he and lodge owner Sophie have an instant attraction. But when Sophie realizes the reason for Evan’s stay, she must convince him the lodge is a bad investment- while trying not

to fall in love.

Rudolph the Red-Nosed Reindeer Deluxe Edition Have a holly jolly Christmas with the most famous reindeer of all in the original holiday special, Rudolph the Red-Nosed Reindeer! After being told he could not play in any Reindeer Games due to his glowing nose, Rudolph sets out on a fantastic journey where he meets Hermey the elf, prospector Yukon Cornelius and a host of Misfit Toys, all while trying to hide from the Abominable Snow Monster. It’s a race against time as his family and Clarice try to find him during a big snowstorm that threatens to cancel Christmas. Based on the timeless story and song, the Rankin/Bass production of Rudolph the Red-Nosed Reindeer features groundbreaking “Animagic” stop-motion animation, narration by Burl Ives and unforgettable

songs including “A Holly Jolly Christmas,” “Silver and Gold” and “We’re a Couple of Misfits”. It’s pure holiday magic for the entire family!

Debbie Macomber’s Dashing Through the Snow Based on a novel by Debbie Macomber, this yuletide movie tells the story of Ashley Harrison (Meghan Ory) and Dash Sutherland (Andrew W. Walker). Ashley, who is based in San Francisco, is desperate to spend the holidays with her family in Seattle and Dash is also in a rush to get there. When Ashley encounters a problem with her reservation at the airport ticket counter, she attempts to rent a car. But there s just one vehicle left and Dash beats her to it. Reluctantly, Ashley takes him up on his offer to join him on a road trip. Will this unexpected bump in the road lead them down a path to romance?

F.B.Eye) must solve a holiday whodunit in this feature-length special of the award-winning mystery series set in Edwardian Toronto. Days before Christmas, Murdoch and his wife, Dr. Julia Ogden (Gemini winner Hélène Joy, Durham County), travel to Victoria, British Columbia, to spend time with Murdoch’s eccentric brother. But instead of a relaxing holiday with Jasper (Dylan Neal, Dawson’s Creek) and his family, they end up investigating a murder at an archaeological site.
Back in Toronto, Constables Crabtree (Jonny Harris, Still Standing) and Higgins (Lachlan Murdoch, Copper) try to impress their sweethearts before a skiing outing, and Inspector Brackenreid (Thomas Craig, Where the Heart Is) and his wife invest in a money-making scheme run by a man

Christmas Connection Flight attendant Sydney is tasked with looking after Leah, an unaccompanied minor. After Leah is safely delivered to her father, Jonathan, Sydney finds a package Leah left behind and delivers it to Leah. She ends up missing her connection and Jonathan invites her to spend the holidays with them. Starring Brooke Burns and Tom Everett Scott.

The Sound Of Music Live  The beloved family classic comes alive once again! The world’s most popular musical,

Rodgers and Hammerstein’s The Sound Of Music, comes brilliantly to life in this ambitious, live-broadcast production from BAFTA-nominated director Coky Giedroyc!
The spectacular Kara Tointon (Mr Selfridge, EastEnders) delivers a “mesmerizing performance and incredible vocal talents”, (Daily Mail) as Maria, the tomboyish nun who reluctantly becomes the governess for seven children living in the shadow of their stern widower father (Julian Ovenden, Downton Abbey). Along with her required duties, Maria brings love, music and excitement back into the children’s lives … and also eventually begins to have an effect on their father. But just when things are looking up, the rise of Nazism and the looming threat of war darkens their future …
Supported by Katherine Kelly (Mr Selfridge, Coronation Street) as Baroness Elsa Schraeder and Alexander Armstrong (The Armstrong And Miller Show, Danger Mouse) as Max Detweiler, The Sound Of Music Live is an enchanting experience that will remain with you long after the last curtain call. 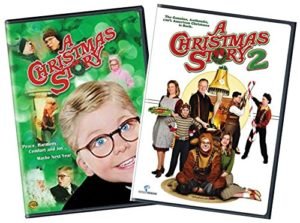 A Christmas Story / A Christmas Story 2 Holiday Collection 1 and 2 This delightfully funny holiday gem tells the story of Ralphie Parker (Peter Billingsly) a 1940’s nine-year-old who pulls out all the stops to obtain the ultimate Christmas present. Plus: The original, classic, holiday favorite continues five years later with Ralphie, Randy, Mom, and the Old Man. This time, Ralphie has his eyes fixed on a car… but trouble is sure to follow.