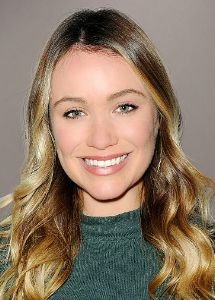 Flo is the daugher of the late Storm Logan, which she didn’t know, growing up. Storm and her mother Shauna had a brief encounter years ago in Vegas. Both Flo and Shauna are from Las Vegas.  Flo was good friends with Dr. Reese Buckingham, who convinced her to come to L.A. with him. He embroiled her in his baby-selling scheme. She was uneasy about helping him, but she trusted him because of their previous romantic involvement and long friendship. Once she met Hope, the baby’s real mother, she started feeling very guilty. Then she learned that Hope is her cousin, which made things worse. Hope and the Logans, as well as the Forresters, welcomed Flo and Shauna and offered Flo a job, which she accepted.  Flo is also Wyatt’s former girlfriend, and they became more than friends, even though he was with Sally.  Reese fled town, but his daughter, Zoe, found out what they’d done. She and Thomas kept pressuring Flo not to tell anyone about the baby switch, so they wouldn’t all go to jail.

Flo seems like a very nice, kind person, caught up in something that she didn’t expect. She was tortured with guilt. She grew up without much family, so she’s very grateful to know that she’s connected to the Logans.  Her tacky mother, Shauna, embarrasses her a little when they first were around the Forresters. Somehow Flu grew up with more manners and seems to be classier and have more style than her mother.  She worked in Las Vegas as a croupier at a craps table, and then she worked in L.A. at Bikini Bar as a bartender before taking the job at Forrester.  Flo doesn’t smile much, unless she’s around Wyatt.

The truth came out about Phoebe being Beth, so Flo was fired from Forrester and ostracized by both the Forresters and Logans. She went to jail but cut a deal, so she was released.  She gave one of her kidneys to Katie when she was sick. She didn’t want the Logans to know at first, but then her mother made sure they knew.  She and Wyatt reunited, thanks to Katie’s suggestions and pointing out how much Flo has redeemed herself.  Brooke and Sally were really the only ones that didn’t forgive Flo.

Sally pretended to be dying, so Wyatt let her move back in with him. Flo was supportive of the idea, but eventually she grew suspicious of Sally’s health and found out that she was faking.  Flo was hit over the head by Sally’s friend and doctor, Penny, just as Flo was about to tell Wyatt about Sally faking it.

See many details about Flo’s history at Soapcentral