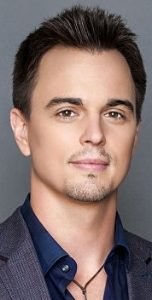 Wyatt arrived in 2013, not knowing that Bill was his father. Quinn had told him that his father was dead. Wyatt met Hope when he was outside, naked, at a Big Bear campground. She was taking photos, but she fell and his her head. He kissed her, and she woke up. She was trying to get over Liam, who was dealing with Steffy leaving him.  Hope figured out from their matching sword necklaces that Wyatt was Bill’s son. Wyatt wooed Hope away from Liam, with some help from Quinn.  Then he lost Hope again, but he and Liam bonded as brothers. Later, Wyatt convinced Hope to marry him, and she was pregnant with his baby.  Quinn went to a mental hospital, but then returned and argued with Hope. Hope fell and lost the baby. She left town for awhile and divorced Wyatt.

He wasn’t happy when Quinn married Deacon, because he knew that Deacon still liked Brooke.  Wyatt teamed up with Liam to get Rick out of the CEO’s seat at Forrester. He romanced Nicole and found out that Maya is transgender. Liam and Wyatt’s father, Bill, used the information to publicly embarrass Maya in his tabloids, so Nicole couldn’t trust Wyatt any more.  Wyatt had a brief interest in Steffy and then Ivy. Eventually, Wyatt found out that Ivy was more interested in Liam, so he went back to Steffy.  Wyatt and Liam often go after the same women.

Liam disappeared when Quinn kidnapped him so that Wyatt could have Steffy. She sent text messages to make them think that he was just off finding himself. Eventually, Wyatt figured out the truth and rescued Liam. Steffy dumped Wyatt when he told his mother that she and Ridge were conspiring to keep her out of Forrester (while her husband, Eric, was in a coma). Wyatt divorced Steffy, so she could go back to Liam.

At this point, Wyatt and Liam both worked at Spencer, for their dad, Bill. Wyatt grew close to Katie, who took over his PR job at Forrester. They started dating in secret because they knew Bill wouldn’t approve. Wyatt was shocked when he wanted to ask Katie to marry him, and Bill threatened to disown him. Wyatt agreed with Bill, in order to get his future secured at the company, but he kept seeing Katie anyway. Bill cut him off for letting Liam know that Steffy wasn’t really having an affair with Bill (Bill and Justin set it up to make it look that way).

Katie broke up with Wyatt for Will’s sake, and he found Sally at the local Bikini Bar near his house. She was homeless and low on money after Thomas dumped her, so he took her in, to help her out. They ended up romantically involved, of course. Quinn is not a big fan of Sally’s and has tried to break them up.  Forrester hired Wyatt back to do PR, and he got Sally hired as a designer as well.  Wyatt and Bill mended their relationship, so Wyatt went back to Spencer Publications. He talked Bill into financing a new Spectra Fashions for Sally, but she decided to stay at Forrester after Ridge and Eric begged her to stay.\

Wyatt’s former high school girl friend from Las Vegas, Flo,  came back into town, and back into his life. He urged her to find out who her father was, and it turns out that the late Storm Logan is her dad, so she’s related to Hope, Brooke, Katie and Donna, and their children.  Flo’s mother, Shauna, also followed her out to California. Shauna and Quinn are great friends. Sally wasn’t too happy about Flo and Wyatt spending time together.  Wyatt was upset that Sally stayed at Forrester and that she’s got some kind of secret with Thomas, so they were fighting.  Wyatt and Flo have kissed a few times.

Wyatt has been very unlucky in love, but he always seems to have hope for things to improve. He falls in and out of love very easily. He has a great sense of humor and seems to cherish any woman that he’s with.  It’s hard to say which relationship is worse for him, that of his mother (who constantly tries to interfere in his love life), or his dad (who often treats Wyatt poorly).  His friendship with Liam, his brother, took awhile, but it seems like the most stable of all of his relationships.

Wyatt and Flo rekindled their romance, so Wyatt dumped Sally.  When the big baby switch secret came out, Wyatt dumped Flo and went back to Sally.  When Flo gave Katie her kidney and professed her deep regret about her part i n the baby switch, Wyatt forgave her and dump Sally again.  Later, Sally pretended to be dying, So Wyatt let her stay in the beach house. Sally tried to use this scheme to get him to fall in love with her again. Time will tell if it worked. 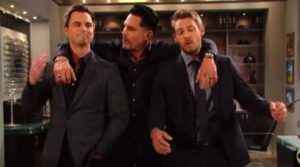 Read all about Wyatts full history at Soapcentral