NEWS AND INFORMATION!  Scoops and Spoilers Below

THE YOUNG & THE RESTLESS Spoilers: Gloria Has a Plan!

Today’s Y&R (Monday, June 13) was postponed due to congressional hearings. It will air tomorrow, Tuesday, 6/14.

THE YOUNG & THE RESTLESS Spoilers: Mariah and Tessa Marry!

Ashland and Victoria rent a hotel suite in Manhattan after she cuts her family out of her life. They want to figure out what to do next. Adam is made CEO of Newman. Victoria thinks that they should start their own communications company (and compete with Newman Media). She and Nick speak on the phone, and she mentions that she’s been taking some business meetings in NYC, so he knows that she’s been using her own contacts, not Ashland’s. He guesses that she wishes to compete with Newman Media. Victoria figures that Nick will pass the information on to Victor, to let him know that she’s moving on.

Early Editions: Diane tries to elicit sympathy from someone. Someone gets an interesting offer from Jack. Adam attempts to help Chelsea. Victor tries to trap Ashland.

Phyllis comes back to town after visiting Daniel, telling Summer that she has let go of her anger. Summer tells her to prove it by making up with Diane. They meet her in the park, and Phyllis suggests they put aside their feelings to make it work for the sake of the kids. Diane accepts her proposal and then lets Jack know what’s going on. Phyllis and Jack meet up at the park. He gives her five minutes.

6/20 Chloe and Chelsea disagree. Kyle starts a new thing that will challenge him. 6/21 Lily finds out something that intrigues her. Chelsea ponders her past. Victor gets his family together to talk about how they’re going to handle Victoria. 6/22 Diane gets a hint from Michael about what to do. Amanda finds out something disturbing. 6/23 Victor gets in the way of Victoria’s plans. 6/24 Nick thinks about moving. Tessa prepares to face something that she never thought she would. Jack won’t budge with Phyllis.

Eileen Davidson (Ashley) and Beth Maitland (Traci) talk about playing their roles on the show for 40 years.

When Chancellor-Winters launches, there is some trouble at the big gala they throw. Devon and Lily want to just present the company, but Nate wants to be more aggressive in their approach to announcing what they have in mind to the world. Nate gets annoyed when those two and Billy stick to their plan to keep their plants quiet. Imani listens to Nate and agrees with what he’s saying. She may have an agenda when it comes to her support. When Nate gives his speech, he decides to diverge from the script (and what the others want) by telling everyone that they will be launching 50 new podcasts in the coming weeks. Lily and Devon are shocked.

Michael Adamson (ex-Noah) has been playing Michael on GH while Chad Duell had COVID. Cameron Mathison (Drew) praised his performance.

Chance meets with another police officer, played by Tremayne Norris, 6/13.

Jess Walton (Jill) returns to the show 6/13 to attend the party.

There is another standalone episode 6/17 when Traci and Ashley look back on their 40 years in Genoa City.

6/13 Jack keeps people from fighting. Devon and Lily gets some wise advice from Victor. 6/14 Nikki gets annoyed with Diane. Adam gets some news he didn’t expect from Victor. 6/15 Sally and Adam give a toast to what they’ve accomplished. Ashland and Victoria go on a trip. Victor strikes back at someone. 6/17 Jill finds out from Billy how things are going. Michael is hired by Nikki for a new job.

The show is given a Thumbs Up! for Mariah and Tessa’s wedding.

In honor of Father’s Day, soap stars’ dads brag about their kids, including the dad of Cait Fairbanks (Tessa).

Jack is livid after overhearing Phyllis throw their relationship in her face, that she only got back together with Jack because Diane came to town. Phyllis apologizes, but he doesn’t accept it. Diane, on the other hand, has been playing good lately with Kyle and everyone, which makes her look better to Jack than Phyllis does.

Billy’s future is a concern for Jill. Traci and Ashley talk about their past memories. Nate does something bold. Victor makes an announcement that shocks everyone.

Adrienne Frantz (Amber)’s baby was rushed to the hospital with an elevated fever and white blood count and then later released (but they don’t know what caused it). There is no news yet on whether he’s OK or not.

Peter Bergman (Jack) talks about how great it is having the character of Diane back (as well as her portrayer, Susan Walters).

Victoria’s family is shocked when she tells them that she wants Ashland back. She yells at Victor for getting a restraining order against Ashland (to keep him from Kyle). She’s willing to give him another chance. She also steps down as CEO of Newman and cuts ties with the other Newmans so that they can no longer interfere in her life. They can’t talk Victoria out of it. Adam, of course, will want to take over as CEO.

6/6 Adam plans what he’ll do to get his revenge. Ashland is made to leave town by Victor. 7/7 Kyle and Summer ask Jack for advice. Diane has sympathy for Ashland. 6/8 Victor promises Vicky something. Nick tells Sharon something in confidence. 6/9 Billy makes Lily lose patience with him. Chelsea allies with someone unexpected. Victor decides to do something rather than relying on others. 6/10 Devon moves forward with his life. Elena takes a look at someone with whom she’s competing. Nikki and Victor decide something that is painful for them.

The show’s costume designer, David Zyla, talks about the 70’s-inspired costumes for Mariah and Tessa’s wedding. Also, Sharon Case talks about the many wedding outfits she’s worn on the show.

Stars talk about their past real-life weddings, including Mishael Morgan (Amanda) and Susan Walters (Diane).

Robert Newman (Ashland) and other actors talk about the late Jerry verDorn (ex-Clint, OLTL; ex-Ross, GL), who passed away May 1st.

Camryn Grimes (Mariah) and Cait Fairbanks (Tessa) talk about their wedding on the show and how much they enjoyed it. Tessa spends time with her sister, Crystal, beforehand.Mariah is with her mom and sister Faith to get ready. They’re both a bit nervous. The actors assure us that it should be a happy day for fans.

Early Editions: Phyllis and Jack talk about their relationship. Someone pushes Nikki to the breaking point. Billy hears some ground rules from Lily. Victor gets his revenge on someone.

Summer will now be played by Allison Lanier. She is featured briefly about getting the role.

Chloe thinks her mom should meet someone and have happiness, rather than spending so much time being Grandma. Esther is on a dating app, so Chloe helps her improve it.

Sneak Preview: 5/16 Tessa is rescued by Chloe. 5/17 Someone makes themselves at home with the Abbotts. 5/19 Noah tries to charm someone. Jack is surprised by Phyllis. 5/20 Kyle has to decide something important. Diane is the topic of a discussion between Ashley and Phyllis.

Sharon Case (Sharon) is chosen as Performer of the Week for how she handled Rey’s death.

Josh Morrow (Nick) is featured in a short interivew.

Late-Breaking News: Diane goes to talk to Kyle but finds all the other Abbotts waiting for her. Abby and Ashley are not very welcoming, but Traci reminds them that they’re there for Kyle. Diane tells them what she’s already told Kyle, that she’s had therapy and isn’t the same person she used to be. Ashley and Abby pepper her with questions, not believing the story. Diane decides to leave when she’s had enough of all this.

Peter Bergman is featured in a short interview.

Early Editions: Kyle wonders whether he should stay in town or not. Chloe helps her mom get on with her life. Mariah and Tess get ready to get married.

Comings and Goings: Morgan Obenreder returns as Crystal, Tessa’s sister, for her wedding to Maria 5/13. She was last seen in 2017. The actress speaks briefly about her return.

Sneak Preview: Billy is confronted by Victoria about what he’s doing now. Newman Enterprises has new confidence, thanks to Victor. 5/10 Someone visits Jack that he didn’t expect. Diane runs into Sharon and Nick. 5/11 Chelsea tries to deal with her feelings. Michael hears Lauren’s worries about his new project. 5/12 Nikki tries to control the fallout. Ashland wants to atone for past sins. 5/13 Nikki tells Ashland to leave. Michael gets a new assignment from Victor that might cause him harm.

The show is this week’s “Editor’s Choice” for storyline for how Victoria put one over on Ashland.

Victoria’s family is worried that her love for Ashland still blinds her from the truth and that she won’t be able to get him out of their lives. Victoria admits to them that she still loves Ashland, but it doesn’t matter. She’s still committed to cutting him out of her life. Her plan is to catch Ashland trying to frame Adam. However, Ashland is trying to persuade Victoria to just leave town with him. This confuses her as she wonders about his true intent. Victor doesn’t think that Ashland could love anyone, but she points out that Nikki always sticks with Victor, no matter what terrible things he does.

Phyllis acts in a guarded way. Victoria suddenly faces unwanted attention. Sharon thinks that her life is going in the same way it went before. Jack tries to control a bad situation.

Jack gathers the Abbotts and tells them that Diane is alive. Ashley thinks they shouldn’t tell Kyle about it, but Jack insists that it’s best if Kyle hears it from him. Diane checks into the Grand Phoenix to stay awhile.

4/11 Rey goes through a test for his loyalty. Mariah and Tess decide something important. Jack tells Diane that she has to follow certain rules. 4/12 Nick gets counseling from Sharon. Adam’s judgment is doubted by Victor. 4/13 Victoria gets an earful from Victor. Ashland is given some bait from Adam. 4/14 Adam is accused by Victor of going off on his own plan. 4/15 Victoria hears Sally’s pitch. Nick gets very angry. Billy bends over backwards to help Victoria.

Kate Linder (Esther) looks back on her 40 years on the show.

Peter Bergman (Jack) talks about playing a businessman on the show.

Don’t forget to sign up for our weekly scoops newsletter for more scoops!! 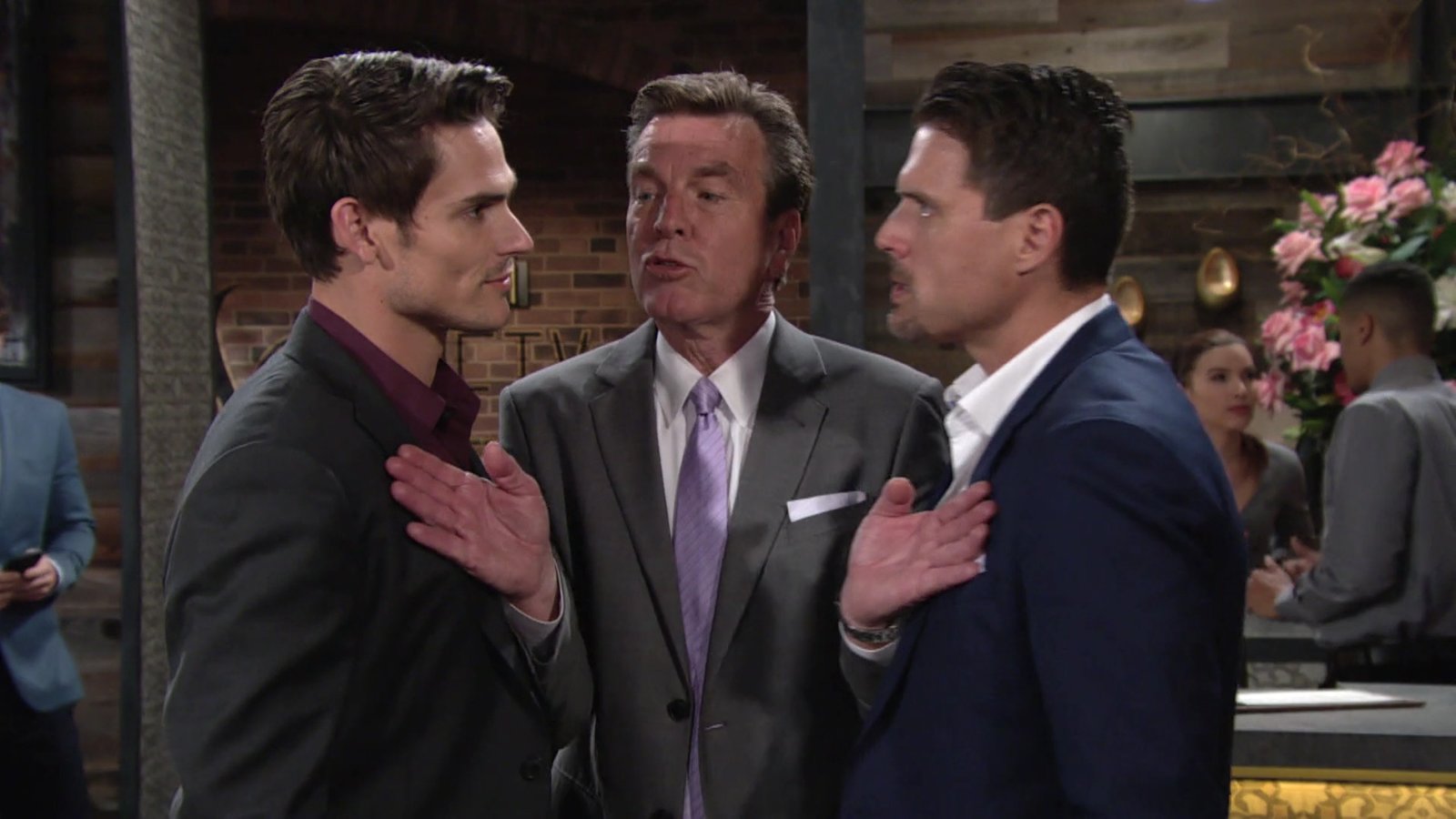