Interview with Alex Gibney, Scott Higham, Dr. Anna Lembke and Dr. Art Van Zee of “Crime of the Century” on HBO by Suzanne 2/10/21

I was delighted to attend this TCA Virtual Press Tour. I was only able to ask one question because there were so many press there. This sounds like a great documentary that everyone should watch.

Today (2/23) I was asked to take the transcript down, for some legal reasons (that has never happened before, but I guess the TCA has different rules than regular TV networks). I will get a summary together for you later.

The two-part documentary “The Crime of the Century” from Academy Award and Emmy winner Alex Gibney, is a searing investigative work that reveals the inner workings of the multi-billion dollar industry behind the opioid epidemic. Following the trailer, we will be joined by Alex Gibney, Director, Writer and Producer, and Film Subjects Scott Higham, Washington Post Investigative Reporter, Dr. Anna Lembke, Medical Director of Addiction Medicine at Stanford University, and Dr. Art Van Zee, Primary Care Physician. (Clip shown.)

Here is the question I asked:

MODERATOR: Good morning to our panel. Our first question comes from Suzanne Lanoue.

SUZANNE LANOUE: Hi. How long did it take for you to make this?

Here are links to other reporters’ summary of the discussion.

HBO’s THE CRIME OF THE CENTURY, a two-part documentary directed by Emmy® and Academy Award® winner Alex Gibney (HBO’s “The Inventor: Out for Blood in Silicon Valley,” “Going Clear: Scientology & the Prison of Belief”), is a searing indictment of Big Pharma and the political operatives and government regulations that enable over-production, reckless distribution and abuse of synthetic opiates.  Exploring the origins, extent and fallout of one of the most devastating public health tragedies of our time, with half a million deaths from overdoses this century alone, the film reveals that America’s opioid epidemic is not a public health crisis that came out of nowhere.

With the help of whistleblowers, insiders, newly-leaked documents, exclusive interviews and access to behind-the-scenes investigations, and featuring expert input from medical professionals, journalists, former and current government agents, attorneys and pharmaceutical sales representatives, as well as sobering testimony from victims of opioid addiction, Gibney’s exposé posits that drug companies are in fact largely responsible for manufacturing the very crisis they profit from, to the tune of billions of dollars…and thousands of lives.

THE CRIME OF THE CENTURY will debut on HBO and be available to stream on HBO Max this May.

The opioid crisis has resulted in a country ravaged by corporate greed and betrayed by some of its own elected officials, following the aggressive promotion of OxyContin, a highly addictive drug from family owned pharmaceutical giant, Purdue Pharma. Purdue worked closely with the FDA to get the highly profitable pain medication approved for wider use, promoting its safety without sufficient evidence, and creating a campaign to redefine pain and how we treat it. When government regulators or Justice Department officials tried to mitigate the wrongdoing, Purdue Pharma and companies like Cardinal-Health that were huge opioid distributors would settle the cases, keep the details private and continue on unabated. As tens of thousands of people succumbed to opioid addiction, the fortunes built by the opiate business became the crime of the century, and the market that OxyContin had opened paved the way for even deadlier prescription drugs.

Part Two of THE CRIME OF THE CENTURY shines a spotlight on the mass marketing of the synthetic opioid fentanyl and examines the connections between drug manufacturers and government policy.  While America’s silent epidemic was killing 40 people a day, Insys Therapeutics, an upstart opioid manufacturer of fentanyl, continued to bribe doctors to overprescribe. Startling video of sales retreats and promotional material speak to a deep cynicism among company employees and a disregard for the widespread, nefarious corporate practices. A complex scheme to defraud the insurance companies existed side by side with fraudulent marketing tactics while lawmakers continued to turn a blind eye to the implications of a complex pipeline that delivers billions of pills around the country. 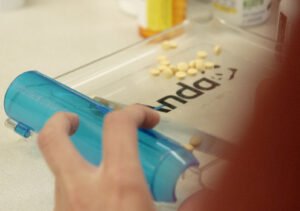