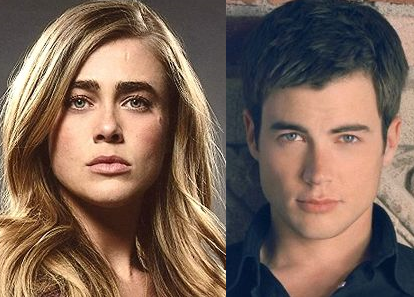 It was nice to interview two of the bigger stars of this show! They were very laid back and had a good time answering questions. I’ve seen Matt on so many great shows, going all the way back to “Jack and Bobby” in 2004, and he was really good in “Mad Men“, as well as “Helix” and more.  Melissa has also been in some of my favorite shows, such as “Supernatural” and “DC’s Legends of Tomorrow,” and the movie “Star Trek: Beyond” (you wouldn’t recognize her there because of the heavy alien makeup!).  She is so great as Michaela on this show. We only had a short time with them, but I managed to get some great questions in, thanks to my sister-in-law, Eileen, and her husband, Joe, who are huge fans of the series. I watch it, too, but I’m way behind. Hope you enjoy this!

Question: Melissa, what do you think is the biggest challenge for a show like this, which is fantasy, to make it relatable to people? Why do people relate to sci-fi and fantasy do you think so much, and what’s behind it?

I think people like sci-fi, because, especially right now, during COVID, when we’re all stuck inside, it’s like an escape. It’s the biggest escape from reality, because it’s the unknown. It’s mythology. It’s things that don’t normally happen, like us hearing voices and, you know, airplanes disappearing and coming back. It’s not a normal situation, which makes it really fun to explore.

Question: Matt, you joined as a recurring character; now you’re the main cast. As an actor, can you speak about, like is that something you expected, I mean, I’m assuming hoped to happen, but expected it to happen, and how is that experience of coming into a show and then becoming part of that family?

Matt: It was set up that way from the beginning that Zeke would recur in the first season and then become a series regular in season two. So, when I tested for this, I signed a contract for the full term of the show. That being said, as an actor, you never know if they’re going to exercise that, so there’s always a possibility that you recur in the first season, and they decide to go a different direction, and you don’t come back to the series regular.

I mean, I did a show called “Private Practice” that I sort of had a similar thing that if it had gotten continued in season six at the end of the season – I think season six was last year – I recurred the first half of the season, and if it had continued, I would have become a regular, but it didn’t, and that’s just what it was.

As far as joining the show, it’s been fantastic. I’ve been so lucky from the very beginning that Jeff has written a really compelling, interesting, complicated, complex story for me and Zeke. I love him; I love the characters so much, and also, the cast is so great. I got to join it in the first season, and I came in the end of episode 12, I think, so it was still quite new for them. They were still in their first season. So, I feel like I got to join quite early on, which helps you also to feel a part of it, as it’s getting its life and growing, and its fans [grow]. So, it’s been fantastic, and I’ve been after something like this for a long time.

Suzanne: My sister-in-law Eileen and her husband Joe love your show. I think it’s the only show they watch; they just love it. So, she gave me questions, because I’m behind. Melissa, since you play a cop, did you do any special preparation in that before you started playing Michaela?

Melissa: Yeah, I spent a year as a police officer. No. It’s a good question, but at the same time, we’re in such a make-believe world that even if I did do research, it’s so different from the realities of what a cop would go through… So, I don’t think our show portrays the reality, in good and bad ways, because our show is very sci-fi. So, my cop dealings are mostly involved in that.

That being said, J.R. [Ramirez] and I, since we were partners at the beginning of all this, we did shadow NYPD for a couple days. They took us on a little drive, and they showed us the precinct. So, it was just fun being able to chat with them about what their life looks like, and then we could take little bits and pieces… but overall, it’s just about the characters and how they’re reacting to this crazy mystery.

Suzanne: All right, thanks. And, Matt, she wanted to know if you’d ever played a drug addict before.

Matt: I don’t think…. I did a pilot in 2006. Nobody ever saw it, but the kid had struggled with that, but never anything that anyone’s ever seen, which was one of the my favorite things about Zeke. It was so different for me and refreshing.

Suzanne: All right, thanks a lot. I’ve seen you in so many shows, and I’m glad to see that you’re on this one.

Matt: Thank you very much. I’m pleased to be a part of it.

Question: What’s been the biggest challenge and biggest happy surprise of working during the pandemic?

Melissa: The biggest thing for me is that we’ve been able to get through it. When all of this hit, it was a two week quarantine, and you think it’s all gonna go back to normal, but then, as time goes on, we [didn’t] realize how serious it. Filming a TV show during this time just seemed a little bit bonkers. Obviously, all of us [were] wanting to get back on the set and see each other and continue telling the story, but there’s the fears of, you know, we are in a pandemic. So, the fact that the team in charge of safety on set kept us going the entire time, that was really neat to see, because a lot of shows had been shut down or cancelled, and they didn’t get to continue telling their story. So, we were really lucky for that.

Matt: The hardest part, I think, was trying to connect with each other. The pandemic is not a part of our story. We also wore masks, obviously, off camera, but when we shot, there were no masks. We had been living in this pandemic for months when we got here to shoot this series. When we first took our masks off to do scenes, it was really surreal. It has been a constant sort of struggle, I think, to be able to connect with each other like you normally would and in a world where the pandemic didn’t exist.

We don’t have really any intimacy this season, and we have several different stories that involve married couples or people that are dating or in love with each other. That’s a part of our show that we didn’t include this year, because of the risk involved. So, we’ve had to make some adjustments, but I think we’ve been successful in telling the story even taking those things into account.

Suzanne: Since Manifest is kind of an unusual show, have either of you had any nightmares after filming it?

Melissa: I don’t know if it’s related to Manifest, but I have nightmares. I just [unintelligible] flying and stuff, not really, to be honest.

Matt: No, I haven’t either, that I remember. I sleep really heavy, and I don’t really…It would be awesome if I could say “Yes, I had this vivid dream!” Wouldn’t be a great story? Maybe I should. I’ll make something up next time.

Here is the video of our interview. 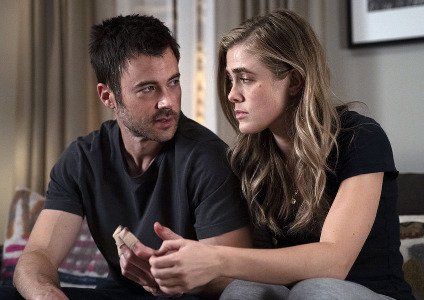 “Manifest” returns for a third season of action-packed drama, shocking revelations and the answer to the show’s biggest mystery – what happened to the passengers of Flight 828?

Over a year has passed since the miraculous homecoming of Flight 828 and the discovery of others who have mysteriously returned. While the Stone family endeavors to keep their friends safe and make their enemies believe the unbelievable, new challenges will test their trust of the callings and each other. But sticking together is more important than ever, because no matter what happens, it’s all connected.

Last year Roxburgh starred opposite KJ Apa and Brit Robertson in the Lionsgate feature “I Still Believe.” Prior to “Manifest,” she played CIA officer Thea in the CW series “Valor.” Her first film role was a coveted part in the “Diary of a Wimpy Kid” franchise. Several television roles followed, including “Supernatural,” “Arrow,” “Legends of Tomorrow” and the telefilm “Rita.” Recent films include “Marine 4: Moving Target” and “Star Trek: Beyond.”

Roxburgh, the second of four siblings, was born and raised in Vancouver. Her father is a pastor and her mother a former professional tennis player. Roxburgh participated in the International Baccalaureate program before pursuing a career in acting. She splits her time between Vancouver and Los Angeles.

Long’s big break came with the starring role of Jack McCallister in the WB’s critically acclaimed series “Jack & Bobby,” starring Christine Lahti. He subsequently recurred as Joey Baird on “Mad Men” as well as Dr. James Peterson on “Private Practice.” He also has had guest-starring roles on “The Newsroom” and “Timeless.”