This is a good series, and it was great to speak to these two fine actors again. They’re very entertaining in the video. I hope you enjoy it!

When wreckage from a destroyed alien spacecraft scatters across the Western Hemisphere, it soon becomes apparent the pieces are messing with the laws of physics, changing lives in ways we can’t comprehend. Two agents from different continents, and different mindsets, are tasked to work together to recover the debris, whose mysteries humankind is not quite ready for.

“Debris” is produced by Frequency Films and Legendary Television in association with Universal Television.

Butz is an award-winning actor whose talents span across television, film and theater. He most recently starred in the critically acclaimed Netflix series “Bloodline,” the FX series “Fosse/Verdon” and on Broadway in “My Fair Lady.” He also starred in “Mercy Street” on PBS and Danny Boyle’s FX series “Trust,” and had starring roles in ABC’s “The Deep End” and the CBS miniseries “Comanche Moon.”

On stage, Butz won his first Tony Award for his performance as Freddy Benson in the Broadway production of “Dirty Rotten Scoundrels,” and earned his second Tony and a Drama Desk Award for his performance as Carl Hanratty in “Catch Me If You Can.” He additionally appeared on Broadway in “Big Fish,” “Dead Accounts,” “Enron,” “Speed-the-Plow,” “Wicked,” “Is He Dead?,” “Rent” and “Thou Shalt Not,” for which he garnered Tony, Drama Desk and Outer Critics’ nominations.

Butz received a BFA from Webster University and an MFA from Alabama Shakespeare Theatre.

Pip is an actor, spoken-word poet and hip-hip recording artist. First gaining recognition as one half of the hip-hop duo “Dan le Sac Vs Scroobius Pip,” he has since made the transition to television. Pip was most recently seen in the independent mystery feature “Kill Ben Lyk,” as well as the British wrestling comedy “Walk Like a Panther” with Stephen Graham. He was also seen in the FX series “Taboo” and Kurt Sutter’s series “The Bastard Executioner.”

Pip is originally from Essex, England. 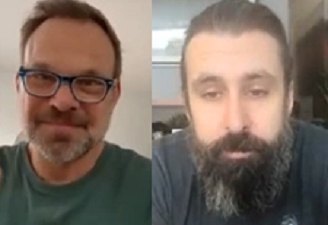