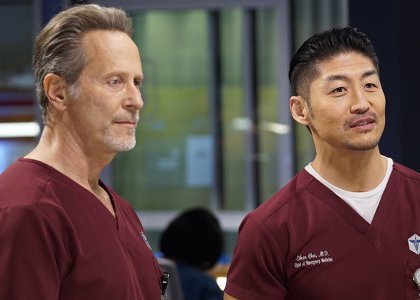 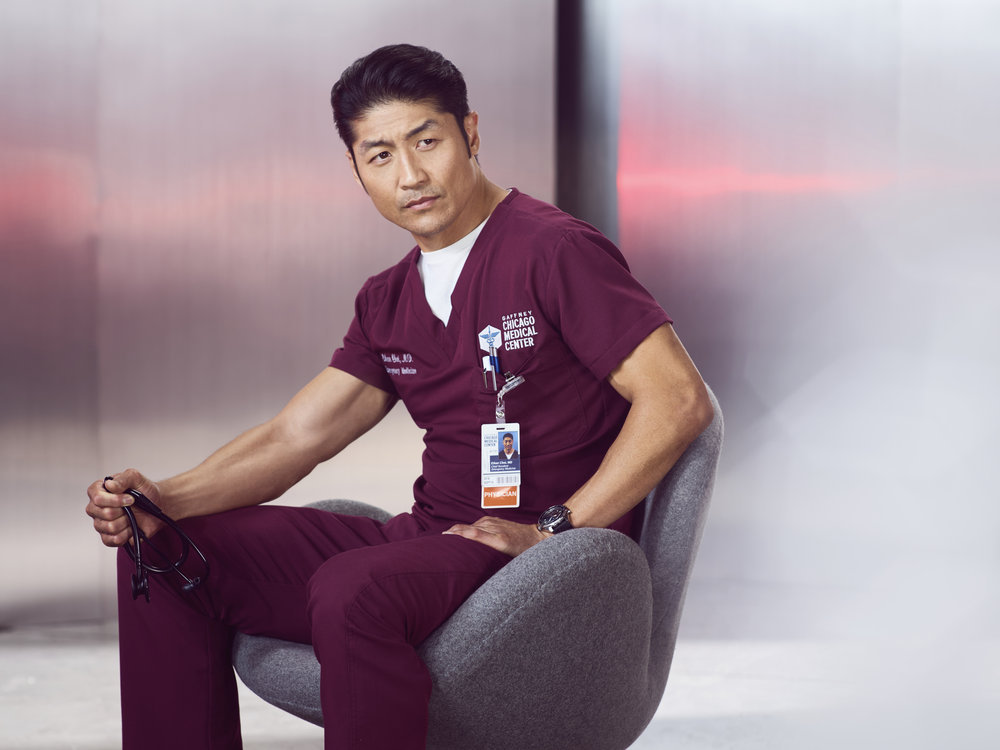 Brian Tee stars as Dr. Ethan Choi, a former Navy flight surgeon and a tireless, yet impulsive doctor who brings his battlefield skills to the front lines of Chicago’s busiest ER, on the NBC drama “Chicago Med.”

Tee is best known around the world for his starring role as lead villain DK, the Drift King, in “The Fast and the Furious: Tokyo Drift,” directed by Justin Lin. On the big screen, Tee was a lead in the summer hit “The Wolverine,” starring Hugh Jackman and directed by James Mangold. He played Hamada, the head of park security, in the box office smash “Jurassic World” and starred in Michael Bay’s “Teenage Mutant Ninja Turtles 2” as iconic villain Shredder.

Tee romanced audiences opposite Anne Heche in the Hallmark movie “One Christmas Eve” and starred in the series “Mortal Kombat: Legacy 2” as Liu Kang. He was the lead in Lifetime’s “The Gabby Douglas Story,” playing inspirational coach Liang Chow, and also appeared in Justin Lin’s comedy “Finishing the Game.”

Tee gave a memorable performance as Jimmy Nakayama in the drama “We Were Soldiers,” opposite Mel Gibson. On the comedy side, he was featured in “Austin Powers: Goldmember,” alongside Mike Myers, and “Fun with Dick and Jane,” with Jim Carrey.

Internationally, Tee starred in the Korean-American romantic indie feature “Wedding Palace” and was the lead villain in Korea’s action film “No Tears for the Dead.”

On the theater side, Tee earned strong reviews for his lead performance in “Snow Falling on Cedars” at the prestigious Hartford Stage.

A Los Angeles native with a mixture of multiple Asian descents, Tee is proficient in both Japanese and Korean and holds a bachelor’s degree in dramatic arts from the University of California, Berkeley. His muse is his family, including wife Mirelly Taylor, and daughter Madelyn Skyler, who are his life’s love and inspiration.

This Queens-born actor has certainly proven himself adept at everything from quirky comedy to flat-out melodrama earning TV stardom in the early 1990’s and maintaining a strong foothold on stage, film and TV in its aftermath.

Steven Robert Weber was born on March 4, 1961, to Fran (Frankel), a nightclub singer, and Stuart Weber, a nightclub performer, and Borscht Belt comic and manager. He was already appearing in television commercials by elementary school age. He later studied at the High School of the Performing Arts in New York and graduated from New York State University. The fair-haired, fair-skinned actor worked a series of menial jobs during his salad days as a struggling thespian (custodian, elevator operator, singing waiter) until earning his break on TV in a presentation of one of Mark Twain’s stories. Quickly making his film debut in the popular comedy The Flamingo Kid (1984), he nabbed a running role on the soap opera As the World Turns (1956) a year later. On the set he met first wife Finn Carter, another co-star on the daytime drama. Steven stayed put for a year then went on to gain recognition in more offbeat and/or prestigious productions on film and prime-time TV. He played a rock star in the thoroughly offbeat foreign-made film Angels (1990) and showed real command as John F. Kennedy in the epic miniseries The Kennedys of Massachusetts (1990).

That same year TV stardom came his way with the sitcom Wings (1990). Co-starring with Tim Daly as Brian Hackett, the looser, goofier more aimless half of the brotherly team who co-owned a one-plane, Nantucket-based airline, the actors’ chemistry, not to mention a terrifically eclectic supporting cast, kept the show on a steady course for seven seasons. Easily typed now as a genial, lovable loser type, Weber faced the prospect of severe pigeon-holing. So during the show’s off season, he started showing up in more serious roles. He suffered at the hands of the deranged Jennifer Jason Leigh in Single White Female (1992); appeared in a second chiller with The Temp (1993); and made a cameo in the highly depressing, award-winning Leaving Las Vegas (1995). His flair for comedy shone in is straight-man role as Johathan Harker in the critically acclaimed horror spoof, Dracula: Dead and Loving It (1995) He truly impressed both critics and audiences alike as the complex title character in Jeffrey (1995), a gay romantic film comedy, and then completely defied all odds by starring in an epic TV-movie version of Stephen King‘s horror classic The Shining (1997), seizing the role inherited from Jack Nicholson and brilliantly making it his own while earning a Saturn award for his chilling efforts.

By the time “Wings” came to an end in 1997, Weber had divorced his actress/wife Finn Carter (they had no children) and married actress/TV executive Juliette Hohnen on July 9, 1995. They have two children, Jack and Alfie. He and Laura Linney were selected to play the TV-movie leads in the popular A.R. Gurney theater piece Love Letters (1999). While other TV series comebacks have fared less well, including the short runs of The Weber Show (2000) (which he produced), The D.A. (2004), Studio 60 on the Sunset Strip (2006), Happy Town (2010) and Chasing Life (2014).

Steven bounced around solidly in other venues. In 2002, he joined the cast of the smash Broadway musical “The Producers,” taking over the nebbish Matthew Broderick role. In 2004, he went to London to appear on stage with Kevin Spacey and Mary Stuart Masterson in “National Anthems.” Other plays over the years have included “Throwing Your Voice,” “Something in the Air” and “Design for Living.”

From Emmy Award-winning executive producer Dick Wolf (the “Law & Order” and “Chicago” franchises), “Chicago Med” is an emotional thrill ride through the day-to-day chaos of the city’s newest state-of-the-art trauma center and into the lives of the courageous doctors, nurses and staff who hold it all together.

Dr. Will Halstead (Nick Gehlfuss) balances the stress of being an emergency medicine physician with his complicated relationship with Dr. Natalie Manning (Torrey DeVitto), a specialist in emergency pediatrics. Newly widowed, Dr. Daniel Charles (Oliver Platt) remains the Sherlock Holmes of psychiatry. Former Navy flight surgeon Dr. Ethan Choi (Brian Tee) brings his battlefield skills to the front lines of Chicago’s busiest ER, the go-to place for victims of the city’s gun violence. Work and personal life intersect with him and April Sexton (Yaya DaCosta), a smart, bold and intuitive nurse with the ability to adeptly tackle the most harried of circumstances in the hospital. Sharon Goodwin (S. Epatha Merkerson), the venerable head of the city’s largest hospital, is under intense fiscal scrutiny to preserve the bottom line while continuing to ensure that all patients receive nothing short of quality care and compassion. Maggie Lockwood (Marlyne Barrett), the charge nurse and eyes, ears and brain of the ER, is skilled and confident but finds herself dealing with profound family issues of her own. Recent addition to the ER is ace surgeon Dr. Crockett Marcel (Dominic Rains), a New Orleans-raised surgeon whose breezy manner hides a tragic past.

Together they will confront Chicago’s most critical medical cases and challenging ethical dilemmas with courage, compassion and state-of-the-art treatment. Inspired by ripped-from-the-headlines cases, “Chicago Med” will weave cutting-edge medicine with the personal drama that comes with working in such a high-intensity environment. Through it all, familiar faces from “Chicago Fire” and “Chicago P.D” will intertwine with Chicago’s finest medical heroes.

“Chicago Med” is produced by Universal Television, a division of Universal Studio Group, in association with Wolf Entertainment. 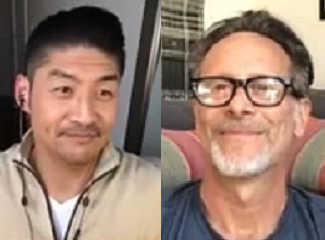