NEWS AND INFORMATION!  Scoops and Spoilers Below

The show was pre-empted Thursday, 6/23 for the hearings. Some areas saw a re-run instead. It will air tomorrow, Friday, 6/24.

The show was pre-empted Tuesday, 6/21 for the hearings.

The show was pre-empted today, Thursday, for news; it will be back tomorrow!

Will Carly Reveal the Shocking Truth?

You heard it here first! Sean Kanan (ex-AJ, now on B&B) said he won’t go back to GH to play AJ!

The show’s 15,000th episode, which airs 6/21, is centered around Laura (Genie Francis, who’s also celebrating her 45th year on the show). The writers wanted to make a “love letter to the fans.” Something big affects Laura’s leadership as mayor. He family, friends and co-workers stand together to defend her.

Jon Lindstrom (Kevin) is featured in a short interview, where he talks about Ryan and Esme.

Alex Hyde-White (Pascal) returns as the ELQ attorney when they decide whether to oust Valentin from the company. Brian Norris (Felty) returns this week.

It’s up to Ned to decide the future of ELQ when the family meets to discuss whether Valentin will leave or not. His decision will have long-lasting effects, including on Carly and Nina.

In the show’s 15,000th episode 6/20, Laura’s job comes under attack. 6/21 Chase wonders if he’ll still be working for the PCPD. Britt gets a gift from Brad as a sign of peace. Olivia learns how Carly has invested her money. 6/22 Valentin gets a warning from Drew. Dex and Brando are given an ultimatum by Sonny to get along. Sasha and Nina have it out with Olivia. 6/23 Anna wonders about Valentin’s dealings with Victor. At the Metro Court pool, something comes out that shocks everyone and leads to more surprises.

The show is given a Thumbs Down! for not moving ahead with couples such as Brook Lynn and Chase, Valentin and Anna, and Gregory and Alexis.

What Will Happen: Anna hears what Valentin has to confess. Taggert, Curtis and Portia worry about Trina. Victor gets asked for help by Spencer.

Patrick Gibbons, who played Sam (Todd’s youngest son) on OLTL, guest-stars as Wyatt. He’s been on before a few times as a boy scout. Now Wyatt is a camp counselor, since he’s older.

Carly buys up many shares of Aurora, making the stock price shoot up. Michael and Drew are happy to see the price go up but dismayed that Carly is taking a big financial risk. Ned is not thrilled about the new merger, but Drew doesn’t think he’ll do anything to mess up the family business. Drew feels that this will give him a real place in the Quartermaine family, too.

There’s a short interview with Robert Gossett (Marshall). He talks about letting Curtis know about his mental illness.

When Finn goes camping with Cameron, Violet, Jake and Aiden, he tries to bond with Cam. Cam is very stressed out, since his mom is in Shadybrook. Cam resists Finn’s attempts at first, but he knows that Finn and Liz are close.

6/13: Esme gets into it with someone. Ava thinks about what Nikolas said. Spencer plans something new. 6/14 Someone unexpected surprises Austin. Spinelli is asked for assistance by Josslyn and Trina. Sonny and Carly chat about his fighting with michael. 6/15 Trina and Joss wonder if everything is just too much for them. Chase and Brook Lynn discover something about Linc. 6/16 Someone gives Britt attention that she doesn’t want. Sonny’s reasons are questioned by Nina. Anna and Valentin date for real.

The show is given a Thumbs Down! for mishandling Elizabeth’s story.

Brandon Barash (ex-Johnny, now Jake) is featured in an interview.

In honor of Father’s Day, soap stars’ dads brag about their kids, including the dad of Josh Swickard (Chase).

What Will Happen: Josslyn hears a suggestion from Trina. Ryan finds out big news from Esme. Ava’s actions stun Nikolas.

Josh Kelly talks about joining the show as Cody, an old friend of Dante’s.

Nikolas and Esme have to deal with what’s happening after they slept together. Nikolas is worried that Ava and Spencer will find out. Esme is still manipulating everyone in order to break up Nikolas and Ava (as Ryan wants).

Kelly Monaco (Sam) woke up 5/13 to a fire that damaged a lot of her house, thanks to a cigarette someone left in the nearby vacant lot. She is fine, though.

Marshall shocks everyone with the real explanation as to why he’s been gone so long from his family.

6/6 Drew demands answers from Carly. Ned makes a counter-proposal to Michael. Sonny hears an offer from Brando. 6/7 Something is delivered to Sasha that upsets her. Cody and Britt argue. Dex gets a warning from Sonny. 6/8 Trina gets big news. Brando gets very worried about Sasha. Carly gets more information from Sam. 6/9 While Elizabeth is gone, Cameron struggles. Ava’s intentions are questioned by Laura. Epiphany studies for the MCATs, with Portia’s help.

Rebecca Herbst (Elizabeth) is chosen as Performer of the Week.

What Will Happen: Finn arrives while Laura is visiting Elizabeth in Shadybrook. Valentin offers something to someone. Carly hears from Willow that she’s decided something.

Ned is annoyed when Michael and Drew team up to oust Valentin out of ELQ by merging the company with Aurora. Ned wants to be CEO, but they’re keeping him out. They offer him the COO position, which he feels is insulting. Meanwhile, Valentin texts him to meet up. Valentin has a proposal to help him keep ELQ, so Ned has to think about it.

Nancy Lee Grahn (Alexis) is back shooting the show after recovering from her surgery. She was happy to talk about her return 4/27 on Instagram. She had scenes with Gregory Harrison (Gregory), whom she once had a crush on when he starred in “Trapper John, MD” (back in 1979). (Well, who didn’t have a crush on him? He was a hottie!) She also thanked Stephanie Erb for filling in for her. See more!

Stephanie Erb is gone, now that Grahn is back playing Alexis.

Sasha is confronted about her pill-popping by Gladys. Felty gives her the bottle of pills after she gives him the memory card.

Sneak Preview: 5/16 Portia and Ava are disappointed by Trina’s news. Valentin gets grilled by Felicia about what his plans are for Anna. 5/17 Carly offers something to Drew and Michael. 5/18 Molly and TJ hope to track Marshall down in Brooklyn. Brando and Sonny have a chat about how difficult family can be. 5/19 Violet and her grandpa Gregory have a date at Kelly’s. Nina run-in with someone puts her in an uncomfortable situation.

What Will Happen: Joss and Carly have a mani-pedi and fill each other in on what’s been going on. Curtis checks in on Nina, and Jordan does the same with TJ. Michael and Willow hear news from Sam and Dante.

Inga Cadranel (Harmony) talks about leaving the show. She has finished her run.

Late-Breaking News: Willow is having a hard time adjusting to the fact that Harmony died and learning that she’s not her real mom. She feels all alone and wants to know who her real parents are. The police want her to take a DNA test to try to find out. Willow confers with Michael, but she’s not in a good place to get confirmation that Harmony really wasn’t her mother, and that she stole her from her real parents. Alexis drops by to let Willow know that she kept Harmony’s secret. Willow decides to take the DNA test after that. She doesn’t want to rely on other people any more, since Alexis kept that secret.

Comings and Goings: Nurse Julie is played by Hannah Choi, who sees one of the hospital’s chiefs of staff doing something naughty May 9.

Responding to rumors about his exit, Maurice Benard (Sonny) assures fans that he’s very happy at the show right now. He does have plans to retire at some point. He would like to just do his podcast, “State of Mind.”

Hot Plots Preview: Trina is upset and vents to Ava about not being able to prove that Esme set her up. Ava suggests that she flirt with Spencer in order to get Esme annoyed and perhaps let it slip about what she did. Trina thinks that might make her look bad. She admits that she was with Spencer at the ceremony and hints that she could have some proof, but it might hurt someone she cares about.

Sneak Preview: 5/9 The attraction between Rory and Trina is noticed by Joss and others. Chet tells Terry something on their date that stuns her. 5/10 Carly and Nina argue. Esme’s room is searched by Spencer. 5/11 Elizabeth meets with a medium. When Nikolas sees Laura with Sonny, harsh words are spoken. 5/12 Someone visits Felicia that she didn’t expect. Britt is asked for help by Spencer.

What Will Happen: Scott is told by Nina that he needs to pay more attention to her case. Gladys get help from Valentin. Willow can’t cope with what’s going on.

Jordan and Dante are upset when they find more evidence against Trina. They’re sure she was set up. Sam goes snooping around the police station because Carly is sure that Esme is behind the case against Trina. Sam and Dante go to dinner, where she tries to get him to talk about the case. Dante has no idea that she’s trying to find evidence. Ava interrupts them to yell at Dante about Trina being jailed. Dante steps away, so Sam grabs his phone and snoops until she finds the forensic report. Dante catches her doing this. This will have a big impact on their relationship.

Avery Pohl (Esme) is featured in a quick Q&A.

As noted above, Stephanie Erb will play Alexis starting 4/25 while Grahn recovers from surgery.

Jack Wagner (ex-Frisco) said on the SOD podcast that he would love to come back to GH next year for their 60th anniversary.

Ava calls off the vow renewal to Nikolas because she’s angry that he agreed to let Spencer and Esme stay at Wyndemere. Nikolas tries to seduce Ava, but it doesn’t work. He likes the challenge and vows to win her back.

4/11 Alexis finds Harmony on the pier, despondent. Trina and Ava get together. 4/12 There is an explosion between Trina and Spencer. Phyllis gets an offer from Sonny. At dinner, Britt is grilled by Liesl about her love life. 4/13 Spinelli, Maxie, Austin, Chase and Brook Lynn all run into each other at the gym, and it’s not pleasant. 4/14 Michael and Willow each tell someone their side of things. Carly is concerned about someone. Aiden is asked by Laura what he’s been up to.

Lynn Herring (Lucy) talks about playing a businessman on the show.

What Will Happen: Marshall and Trina connect. Sonny is approached by Scott. Felicia and Anna follow a new lead as they go undercover.

This page is dedicated to Hilary, our beloved late volunteer, who used to update the scoops pages. 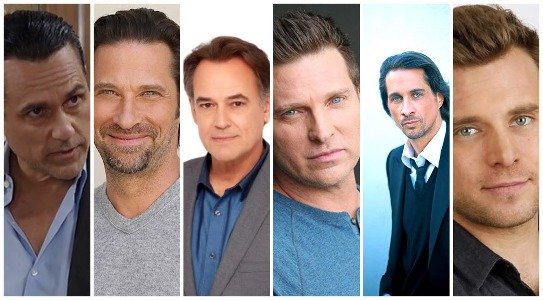