This was a wonderful TV Critics Association panel for a fun new show. I admit that I’m a fan of lead actor James Wolk. He’s been great in so many shows, such as “Mad Men,” “Watchmen,” and “Zoo.” He’s more than just a pretty face. I know, that’s a terribly sexist thing to say. This is a beautiful cast, though. It was nice to meet his co-stars as well. Everyone there obviously has high hopes for this show, so I hope it succeeds.

The show focuses on Wolk’s character, Joe, and the three choices he has in life after college. If he goes to meet his girlfriend, Jenny (Lail), then he ends up with her. If he meets up with this other woman he just met, Amy (Martinez), then he ends up with her. If he goes out with his family, then he has a different path.  We see him on all three paths, how his life turns out, depending on which road he takes. Seeing the first two episodes was interesting. I want to see how they’ll carry this over a whole season. There is Nurse Joe, Cop Joe and Rock Star Joe. Personally, the last one is my favorite.

Because this was a TCA panel and not a regular interview, I was only able to ask one question, and I’m not allowed to share the transcript or recording with you. It was very enjoyable, though.

When I asked my question, which was about singing, Wolk immediately started singing a Billy Joel song to me (swoon!), so that was charming. In the show, when Joe is young, he’s graduating as a music major. He wants to be a rock star – the next Billy Joel. That struck me as a bit odd, given his age.

In the interview, I asked, “Jim, were you a fan of Billy Joel before this show, and had you been singing his songs for fun, or anything like that? You seem a little young to be a Billy Joel fan, to be honest (laughs).” He replied that the mom of an old friend of his used to listen to his albums, and he enjoys singing his music, but he did admit that he’s not as big of a fan of his music as his character, Joe, is. Charlie Barnett (who plays his best friend, Eric) objected to my question and said that “There’s no age limit to good music.”  Well, that’s true, but most people, I don’t think, are quite so much into real oldies that they didn’t grow up with as they are their own teenage or childhood music. Now, I don’t know when Joe was born, but Wolk was born in 1985, which was after the bulk of Billy Joel’s hits, so it would be pretty odd for him to aspire to be like him. It would be as if I aspired to be the next Connie Francis or Brenda Lee. I’m sure most people reading this barely know who those women are. The guys who wrote the show are probably a lot older, so Billy Joel was their music more than Wolk’s. He does have a lovely singing voice, though, and he sang “Piano Man” very well in one of the episodes (I was a music major, just like the character, Joe).

Wolk graciously told us all that the other cast members present there are also really good singers, so he hinted that they may have an all-singing episode one day. Everyone seemed to like that idea.

Check out the series and let me know which Joe is your favorite!

Here’s another review of the show that gives you a lot of information. I agree with a lot of it…however, I don’t think it’s nearly as bland as this reviewer thinks it is. A large part of it rests on how much you like James Wolk and the other actors.

Life is all about the choices you make – and sometimes what you do in a single moment can change everything. This new heartfelt, life-affirming drama follows Joe Kimbreau, who faces one of these decisions at his college graduation. The three parallel stories that diverge from that night find Joe and the people around him with different careers, relationships and family lives, showing the unexpected ways that things change – and stay the same. But when it comes down to it, there is no “right” choice; no matter what happens, Joe’s life is always messy, exciting, tough, unpredictable … and beautiful.

•    NBC has ordered the drama “Ordinary Joe” to series.

•    “I still remember when Matt Reeves shared this passion project back when I worked at Twentieth. Russel and Garrett wrote such a compelling and emotional script that was expertly executed from page to screen,” said Lisa Katz, President, Scripted Content, Entertainment and Streaming. “We love how ‘Ordinary Joe’ lets us experience the universal question of ‘what if’ through an incredible cast of characters and engaging storylines.”

•    Logline: Explores the three parallel lives of the show’s main character after he makes a pivotal choice at a crossroads in his life. The series asks the question of how different life might look if you made your decision based on love, loyalty or passion.

Wolk was recently be seen on the HBO series “Watchmen,” written by Damon Lindoff, based off the comic book series. He also co-stars on the CBS All Access series “Tell Me a Story,” created and produced by Kevin Williamson, which was renewed for a second season.  It takes the world’s most beloved fairy tales and reimagines them as a dark and twisted psychological thriller. He also recurred on season two of Amazon’s legal drama series “Goliath,” created by David E. Kelley and Jonathan Shapiro, and starring opposite Billy Bob Thornton.

Wolk is also known for his starring role on the CBS summer series, “Zoo,” which ran for three seasons.  Based on the bestselling novel of the same name by acclaimed writer James Patterson, “Zoo” centers on Jackson Oz (James Wolk) – a young American zoologist, who begins to notice the strange behavior of the animals, leading to a wave of violent animal-on-human attacks across the globe.

In 2010, Wolk nabbed the lead role in the critically acclaimed but short-lived Fox series, “Lone Star” and co-starred on the the Golden Globe-nominated USA miniseries “Political Animals.” Wolk also notably recurred on the award-winning and critically acclaimed AMC series “Mad Men” and starred opposite Robin Williams and Sarah Michelle Gellar in the CBS comedy “The Crazy Ones.” Other television credits include “Billions,” “Happy Endings,” and “Shameless.”

Wolk, a native of Farmington Hills, Mich., and 2007 graduate of the University of Michigan drama school, began his career in the CBS/ Hallmark Hall of Fame special “Front of the Class.”

Wolk also appeared on stage in the Tony Award-nominated production “Next Fall,” written by Geoffrey Nauffts and directed by Sheryl Kaller, for its West Coast debut at the Geffen Playhouse.

On the big screen, Wolk made his film debut in Disney’s “You Again.” His film credits include “For a Good Time Call,” “There’s Always Woodstock” and “The Is Happening.” Wolk notably co-starred in the 2015 critically acclaimed film “The Stanford Prison Experiment,” which premiered at the 2015 Sundance Film Festival and was nominated for the Grand Jury Prize.

Barnett is familiar to NBC audiences, starring for three seasons as Peter Mills on “Chicago Fire.”  Born in Sarasota, Fla., Barnett began performing at a young age, participating in local opera and musical theater productions before graduating from the Juilliard School.

Other notable TV credits include a series regular role on Armistead Maupin’s “Tales of the City” as well as guest starring roles on “You,” “Special,” “Orange Is the New Black” and “Arrow.” He debuted on the big screen alongside Will Smith and Josh Brolin in “Men and Black 3.”

Lail, who also can be currently seen in HBO Max’s reboot of “Gossip Girl,” is best known for her breakout role as Guinevere Beck in the addicting drama “You,” opposite Penn Badgley. The series premiered on Lifetime in 2018 and quickly became a big hit when it moved over to Netflix.

Lail’s other film and television credits include “Countdown,” “Videosyncrasy” and ABC’s “Once Upon a Time.” She made her theater debut in Ken Urban’s Off Broadway play, “Nibbler” directed by Ben Kamine.

Lail is a BFA graduate from the University of North Carolina School of the Arts.

Martinez, who will be seen in Warner Bros.’ “Reminiscence” with Hugh Jackman and Rebecca Ferguson, appeared in Quibi’s 2020 action thriller “The Fugitive.” In that same year, she also co-starred in CBS All Access’ “The Stand” and previous to that appeared in the Netflix sci-fi series “The I-Land.” Additional TV credits include “The Crossing,” “APB,” “Detroit 1-8-7,” “Under the Dome,” “Secrets & Lies,” “Kingdom.”

On the film side, Martinez’s credits include “Message from the King,” “Keep Watching,” “Self/less,” “Broken City” and “End of Watch.”

Martinez first gained recognition after being hand-picked by Jennifer Lopez to become the spokesmodel for her fashion line, JLO by Jennifer Lopez. From there, she went on to star in several music videos, and the telenovelas “Fashion House” and “Saints & Sinners.”

Previously, they were executive producers on “House M.D.,” where they were nominated for four Emmys Awards and won the WGA Award for Outstanding Episodic Drama. Other writing credits include “Glee,” “Home Before Dark,” “Altered Carbon,” “Roswell,” “Rise” and “Boston Public.”

Lerner and Friend graduated from the USC Peter Stark Program in 1995. 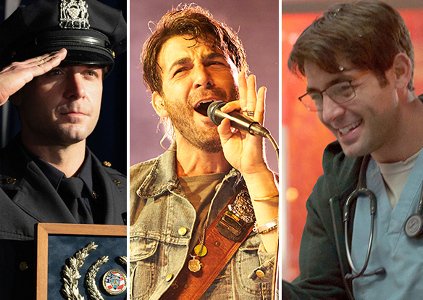