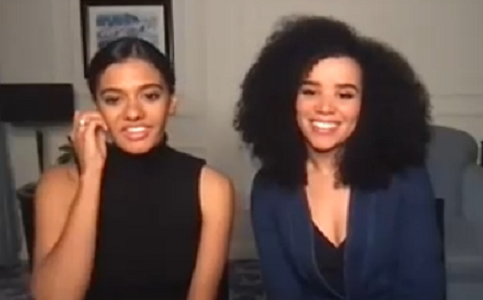 These press interviews with the Wheel of Time cast were short but a lot of fun. The series is exciting. I’ve only seen a few episodes so far, but I really enjoyed them.

Suzanne: Zoë, you do a lot of swimming in the first two episodes that I saw. What was the weather like in Prague when you were doing that, and was it cold?

Zoë: The swimming that I did, I did a bit in episode three, and that was actually in the studio. So, thank goodness, it was warm; they heated the pool. They really did take good care of us. So, I was okay. I was okay.

Suzanne: Good and had either of you done any sword fighting or any physical stuff before this show?

Madeleine: I’ve done stunts before on jobs, but nothing to this level, I think, with horse riding and sword fighting, and it was a completely different beast on this one. We had a month of prep to do some horse riding sessions with our movement coach and stunts. So, no, for me personally, nothing on this level.

Zoë: Same with me. I also had a little bit of stunt experience, particularly with a TV show called Power Rangers; stunts were kind of a given. But on this level [it’s] like nothing I’ve ever done before. We had an intensive boot camp to get us up to speed, and even still, we’re still training with with the amazing stunt team. So yeah, we all had a lot to learn.

Madeleine: Yeah, thank you. That’s such a wonderful question. I’m Aboriginal, so I’m a First Nations’ person of Australia, and there definitely are initiation ceremonies that both men and women do to welcome women or men that are of age in a community. So, that was very special seeing that this was part of a tradition and culture in the Two Rivers. Absolutely, I definitely [grew] up in a very matriarchal family. So, there’ve always been conversations about when you’re coming of age, and also, I really look up to the women in my family. They’re all such pillars of strength, and that’s something that we see in this show, as well. So, I feel like my life and my heritage was a wonderful preparation for what I would find in in this series.

Question: That was for Zoë too.

Zoë: Oh, sorry. Similar to me, I have some incredible women in my family. I do remember some very deep and meaningful and raw and honest conversations I had with my mum as a teenager that got me up to speed with with real life and what to expect, but I can’t say anything similar to pushing someone off a cliff like Nynaeve does to Egwene. So, yeah, my conversations were a little bit more [laughs] tame.

Question: You make it look like the most fun job in the world, and sometimes it can be, but some of these things look like they were kind of difficult to do. I’m curious to know, what kind of headspace do you have to put yourself in, or is there something you have to tell yourself to sort of keep on the right path and keep in the right mindset to do everything that you do?

Zoë: Yeah, I think it’s really important to know – I mean, for me, [for] my process, I like to know where my character has just been and also where she’s going. So, that’s really helpful to stay present in the moment. I think we’ve all had a lot of experiences of really traumatic scenes, emotionally and physically, and it becomes very draining. So, learning how to prepare yourself before then, and being kind to yourself and resting and loving on yourself was really important. But I think a lot of us just immerse ourselves completely. I don’t know if that’s the best way to do it in terms of looking after ourselves, but, I mean, I look around at the the work that everyone’s putting in, and everyone just gives their absolute all to some very hard requirements. 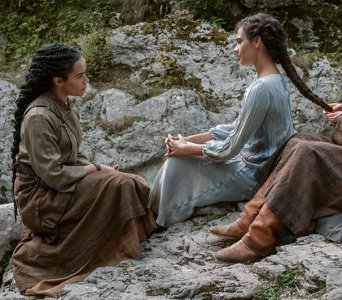 Madeleine: Yeah, absolutely. I think there’s something that you said there, which was, just completely immersing ourselves. I think it is an art form of trying to get in that character’s headspace and just completely staying there in the scene, which can be difficult, but when you have a group of actors that you trust, writers, directors that you can trust, to care for you and your craft, you feel safe enough to kind of push those boundaries, whether that’s physically or emotionally. But it’s been amazing to lose ourselves with these characters and just what they go through.

Question: What’s the relationship like, from each of your perspectives, [between] Nynaeve and Egwene on the series?

Zoë: Nynaeve and Egwene’s relationship is really special. It’s definitely like a sisterly bond, but it’s much more than that. I don’t know, I think we haven’t seen a relationship like this on screen. I think it’s a really beautiful relationship to explore, this purely platonic, sisterly love. I mean, for Nynaeve, she will do absolutely anything for Egwene, and she thinks the world of her. She sees her potential and just wants nothing but the best for Egwene, and I think that’s a really beautiful thing that our show was doing is really highlighting how important these real and truthful relationships are, especially when they want each other to succeed and do well. I think it’s nice to to celebrate those types of relationships.

Madeleine: Yeah, absolutely, I think Egwene really looks up to Nynaeve as a mentor and as like a big sister. They really support each other and champion each other. And I think, like Zoë said, wanting the other to succeed and do well is what gets them through. A lot of the time they survive to make sure the other one lives, which is really wonderful. They’ll do anything for each other, and it’s such a wonderful bond. Yeah, like Zoë said, I think [that’s something that] sometimes, particularly in this genre, that we might not necessarily see.

Question: What’s your favorite part about of this world that The Wheel of Time takes place in? What stands out to you about it and makes you excited about the show and being in it?

Zoë: I think, for me, the level of specificity and detail Robert has obviously put into the world, but in particular, the characters. I mean, for me, it hasn’t been much of a struggle to try and access Nynaeve, because there’s so much on the page already. There’s so much to work with. There’re obviously so many resources. There’re 14 books, as we all know, so, when in doubt, we can search for anything that we’re not sure of, but Rafe has also been an incredible expert and help [to] us. So, yeah, definitely the characters. I’ve never played a character so fleshed out and just real. I think what makes them so beautiful is that they’re so relatable but real humans with complexities and flaws, and they’re not the greatest at times, and you question a lot of their motives and their actions. But yeah, I think that’s what makes them so great.

Madeleine: Yeah, absolutely. They’re just real people in a very fantastical, epic world. I think that’s what makes them such lovable characters is that we can all find a bit of them in ourselves and then relate to them, and exactly like Zoë said, the detail that Robert Jordan has given us with his work is – I remember the first day we walked onto the set of the Two Rivers, and it was exactly how I pictured it from reading the books. So, I think reading the story, and then seeing it come to life, and seeing another artist’s interpretations and their collaborations on the characters or the worlds, has been amazing to just see and be immersed in it.

Question: You’ve got gotten to live with these characters now for a while. What’s one thing that you hope that the audience takes away about your character that maybe they don’t see quite on the screen?

Madeleine: Yeah. Thank you. I think with Egwene, [I’ve] certainly grown with her. She has this sort of sense of self and determination, and she knows her self worth, which I’ve definitely learned a lot a lot about from playing her. I really hope that audiences can also picture themselves in this world and also relate to our heroes and what they go through.

Zoë: Yeah, and for Nynaeve, I hope people can can understand her motivations and why she acts the way she does. [It’s] often because of her deep, intense love for the people that she’s with. She will do anything for the Two Rivers kids in particular. And oftentimes, I think book readers question whether they are aligned with what Nynaeve does and how she thinks and her as a character, but I, personally, get her and love her. So, yeah, I’d love for people to understand all the complexities and the nuances that our characters have underneath. 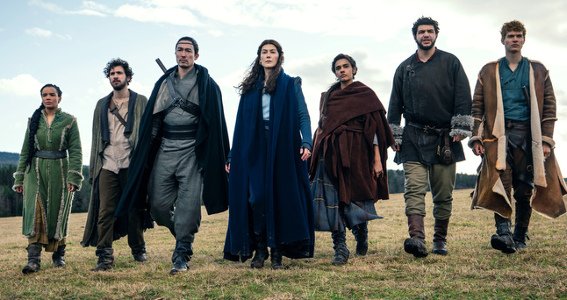 Madeleine Madden (born 29 January 1997) is an Australian actress. In 2010, at age 13, Madden became the first teenager in Australia to deliver an address to the nation, when she delivered a two-minute speech on the future of Indigenous Australians. It was broadcast to 6 million viewers on every free-to-air television network in Australia.  Madden has starred in short films by Deborah Mailman, and Meryl Tankard and co-starred with Christina Ricci and Jack Thompson in Around the Block.[8][10] Her first film acting job was at 8 years old. She aims to become a director in the future. When she was 21, Madden made her big Hollywood debut as Sammy in the 2019 Nickelodeon film Dora and the Lost City of Gold.

More info about the show on our other interview 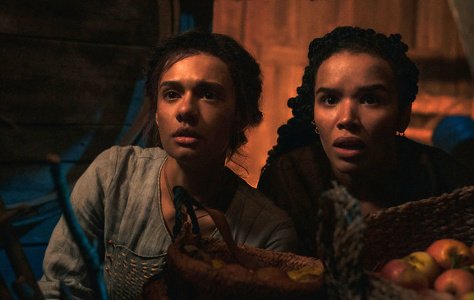