This new action show debuts Sunday, July 10 on Paramount+. If you like shows like Chicago Fire or Chicago Med, you’ll probably enjoy this. It has a lot more action than other medical shows, such as “Grey’s Anatomy,” and it’s less of a soap opera. However, it does have some steamy moments.  It reminds me more of the show “ER,” which always had a lot going on, or the 70’s show “Emergency!”. This show is set up in the Canadian north (i.e. the wilderness) and is based on a real group of heroes up there who rescue people in the boonies and help them out medically.  The main name you might recognize in the series is Aaron Ashmore, who plays “Weezer,” the elder advisor to the younger people on the show. He starred in “Killjoys,” “Locke & Key,” “Smallville” and “Warehouse 13.” Three of the “Killjoys” writers also write on this show.  You might also recognize Aaron because his twin brother, Shawn, currently stars in “The Rookie.” Unfortunately, Aaron was not on this press call, but I enjoyed speaking with the four young actors. Natasha reminds me a little bit of Anne Dudek (“Corporate” among many other shows). I hope you enjoy the interview and the series! If you’re in Canada, it’s available on CBC. 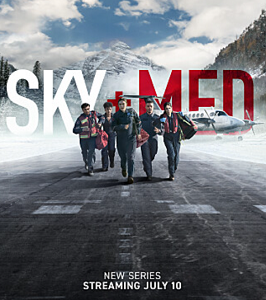 All Nine Episodes of “SkyMed” Will Debut at Launch

The Series Is Produced by Piazza Entertainment

in Association with CBC and CBS Studios

June 16, 2022 – Paramount+ today announced all nine episodes of the new medical drama series SKYMED will be available to stream exclusively on the service in the U.S., beginning Sunday, July 10.

SKYMED follows the triumphs, heartbreaks and tribulations of budding nurses and pilots flying air ambulances in remote Northern Canada. Weaving together intense character journeys with high-stakes medical rescues, a diverse cast of young medical responders must rely on each other for survival at 20,000 feet in the air.

SKYMED is produced by Piazza Entertainment in association withCBC and CBS Studios. The series is created by Julie Puckrin, who also serves as executive producer along with Vanessa Piazza, Ron Murphy and Gillian Hormel. The series will be distributed internationally by Paramount Global Content Distribution.

Paramount+, a direct-to-consumer digital subscription video on-demand and live streaming service, combines live sports, breaking news and a mountain of entertainment. The premium streaming service features an expansive library of original series, hit shows and popular movies across every genre from world-renowned brands and production studios, including BET, CBS, Comedy Central, MTV, Nickelodeon, Paramount Pictures and the Smithsonian Channel. The service is also the streaming home to unmatched sports programming, including every CBS Sports event, from golf to football to basketball and more, plus exclusive streaming rights for major sports properties, including some of the world’s biggest and most popular soccer leagues. Paramount+ also enables subscribers to stream local CBS stations live across the U.S. in addition to the ability to stream CBS News Streaming Network for 24/7 news, CBS Sports HQ for sports news and analysis and ET Live for entertainment coverage.

CBS Studios is one of the world’s leading suppliers of entertainment programming, with more than 60 series currently in production for broadcast and cable networks, streaming services and other emerging platforms. The Studio’s expansive portfolio spans a diverse slate of commercially successful and critically acclaimed scripted programming, which includes genre-defining franchises such as “NCIS,” “CSI” and the ever-growing “Star Trek” universe, award-winning late night and daytime talk shows, as well as an extensive library of iconic intellectual property. The Studio also develops and produces local language and international content originating outside of the U.S. with series in the U.K., Europe, the Middle East and Australia.

Piazza Entertainment Ltd, was founded in 2016 by Executive Producer Vanessa Piazza (“Lost Girl,” “Dark Matter,” “Nurses,” “XIII,” “The Other Half”). Piazza Entertainment is a film and television production company established to create premium television programming for the domestic and international markets. Piazza previously was partnered under a multi-year first look deal with international distributor and studio Entertainment One. That first look arrangement concluded at the end of 2019. In 2020, Edith Myers (former CEO of Pinewood Studios, former COO of the Scott Group of Companies) joined as CFO. Currently Piazza Entertainment has several projects in development. 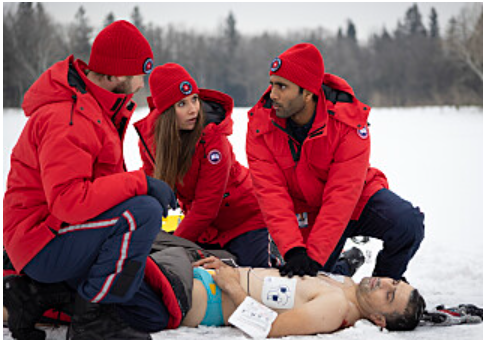