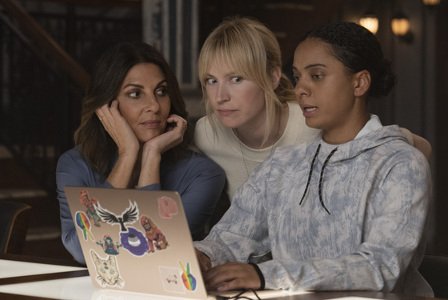 I always enjoy speaking with the actors from this great show! This was my first time speaking with Noah Wyle, who joined last season. Note that there are three different short interviews below. Season 2 drops on Free Nov. 16. I’ve seen the first three episodes, and they were even better than last season. I hope you enjoy them as much as I did!

I’ve enjoyed most of Noah’s roles in “ER,” “Falling Skies” and “The Librarian,” so it was awesome to speak with him. I felt like he was not in the best mood (I’m sure it must be exhausting to go through so much press each time), but he definitely warmed to me.

These two were in great spirits and fun to speak with. They shared the wonderful news about Aldis being in more episodes this season.

Gina was lovely to speak with. Unfortunately, the audio and video was not the best quality. I hope you can enjoy it, anyway! 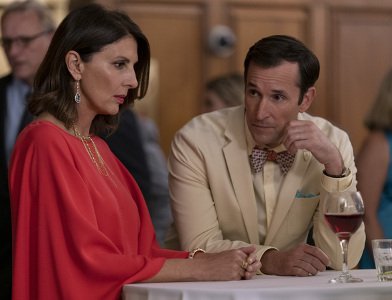 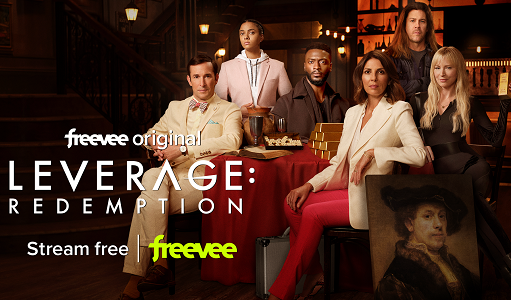 CULVER CITY, California—September 29, 2022— Amazon Freevee announced today the return of its fan-fueled heist drama Leverage: Redemption premiering on November 16 exclusively in the U.S. and UK. Leverage: Redemption follows a Robin Hood-esque team of criminals as they stage elaborate cons against wealthy and powerful individuals on behalf of clients who have been wronged. The second season consists of 13 episodes with the first three episodes available immediately and a new episode releasing each Wednesday until the season finale on January 25, 2023. The fan-favorite first season of Leverage: Redemption is also available on demand and as a FAST channel on Amazon Freevee.

In Season Two, corporate bad guys and dirty dealers are stepping on the little guy in their quest for money and power and the Leverage team is back to teach them a lesson. No matter the danger, when someone needs help, they provide…Leverage. This time around, their criminal skills are put to the test by everything from a husband-and-wife team running a multi-level marketing scam and a shipping magnate dumping boatloads of plastic waste to a music producer who abuses his position over vulnerable women.  This season also sees an old friend of Sophie’s unexpectedly coming out of the woodwork, making her question her choices. 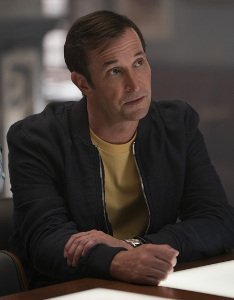 Most recently, Wyle starred in Ava DuVernay & Greg Berlanti’s limited series The Red Line for CBS. His work garnered him a Critics Choice Award for Best Actor in a Limited Series. Wyle’s other recent work includes Matthew Weiner’s The Romanoffs, TNT’s critically acclaimed sci-fi series Falling Skies and his long-running TNT series The Librarians, on which he also served as an Executive Producer.

Wyle’s credits include the critically acclaimed roles as Steve Jobs in the Emmy-nominated Pirates of Silicon Valley for TNT. He starred in Oliver Stone’s 2008 drama W in the role of Secretary of Commerce Don Evans. Wyle appeared in the Rod Lurie-directed drama Nothing But the Truth alongside Angela Bassett and Kate Beckinsale. In 2009, he was seen in William Olsson’s An American Affair, which starred Gretchen Mol. He also starred in and associate-produced The Myth of Fingerprints for director Bart Freundlich. Wyle’s additional feature film credits include Warner Brothers’ White Oleander, Columbia Pictures’ Enough, Donnie Darko, Swing Kids and Aaron Sorkin & Rob Reiner’s A Few Good Men.

Gina Bellman is a New Zealand-born British actress known for her work on both sides of the Atlantic. Bellman has recently reprised her leading role in the exciting new season of Leverage: Redemption for IMDb TV, produced by Amazon Studios and Electric Entertainment.

The original five seasons of Leverage for TNT earned her a Saturn Award Best Supporting Actress nomination and a passionate fanbase as the glamorous and ingenious grifter Sophie Devereaux.

She starred opposite James Nesbit in the BBC, Golden Globe-nominated limited series Jekyll, and has a cult following for her portrayal of Crazy Jane in the multi-award-winning comedy series Coupling – both written by Steven Moffat.

Her television work includes leading roles and guest appearances in many productions such as Henry IX, Ripper Street, The Wrong Door, Waking the Dead, Hotel Babylon, Jonathan Creek, Ted and Ralph, Only Fools and Horses and Blackeyes.

Bellman has appeared regularly at the Royal National Theatre in award-winning productions such as The Crucible: director Mike Leigh’s Two Thousand Years: Cleo, Camping, Emmanuelle & Dick and From Morning to Midnight. Her West End theatre includes The Rocky Horror Show, Hamlet, Speed the Plow, Twilight of the Golds and Orson’s Shadow, in which she played the part of Vivian Leigh and as Marilyn Monroe in Insignificance.

Beth Riesgraf is best known for starring in TNT’s award-winning drama, Leverage opposite Timothy Hutton, Gina Bellman, Aldis Hodge and Christian Kane; and in USA’s Complications opposite Jason O’Mara, Jessica Szohr, Gregory Fears and Lauren Stamile. Riesgraf recently starred in the CBS All Access show 68 Whiskey, produced by Brian Grazer and Ron Howard. She will reprise her role as Parker in the reimagination of Leverage: Redemption for IMDb TV. She also directed multiple episodes for the upcoming series.

Riesgraf’s other notable TV credits include a recurring role in Stranger Things and as Dr. Maeve Donovan on Criminal Minds. She has guest-starred on numerous shows, including Seal Team, The Mentalist, My Name is Earl, Without a Trace, NCIS, Killer Woman, Perception, The Librarians and How I Met Your Mother.

On the big screen, Riesgraf was last seen in In Search of Fellini opposite Maria Bello and Ksenia Solo. Her previous credits include starring opposite Rory Culkin, Martin Starr and Jack Kesy in Shut In; the silent independent film The White Door opposite Giovanni Ribisi, which she also co-produced; the feature film Alvin and the Chipmunks; and the independent films Nobody and Let’s Be Civil Kenneth. She can also be seen in the web series Caper opposite Harry Shum Jr., Abby Miller and Hartley Sawyer on the Geek & Sundry channel.

Aleyse Shannon will soon be seen starring in Netflix’s anticipated Feature Film Beauty, written by Lena Waithe and directed by Andrew Dosunmu. She recently wrapped production as a series regular on IMDb TV’s Leverage: Redemption. Shannon starred alongside Imogen Poots in Sophia Takal’s Blumhouse-remake of Black Christmas. She received her BFA from the prestigious Carnegie Mellon University. Immediately upon graduating, Shannon had booked a season-long arc in the first season of CW’s reboot of Charmed, a fun guest lead on CW’s Anthology Series Night Time, and a supporting role in the feature Inez & Doug & Kira, directed by Julia Kots. 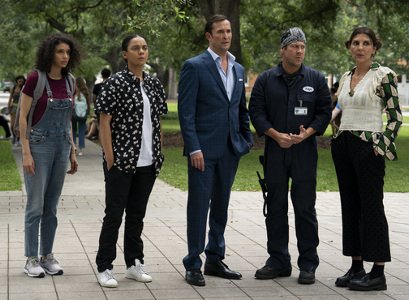