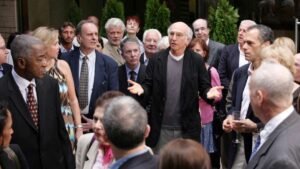 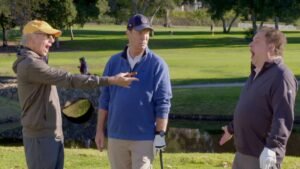 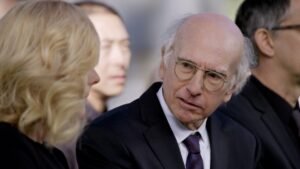 Please link to us by posting one or more of the following banners on your web site, newsgroups, or message board. 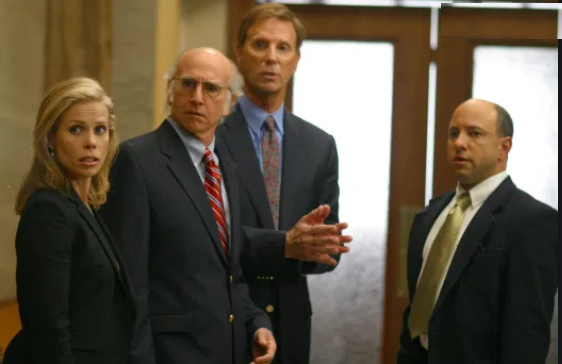 Video Clips of the show 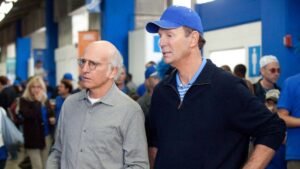 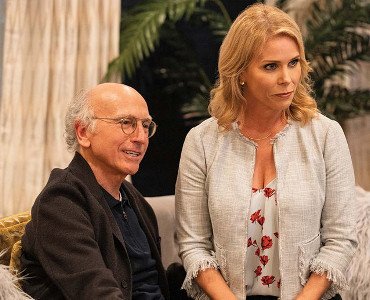 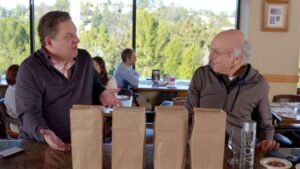 Jeff Garlin revealed in an article that Larry didn’t mention the pandemic when discussing the ideas for season 11.

HBO Curb Your Enthusiasm – Sunday, March 1, 10:30PM The Ugly Section (Season 10 | Episode 7) Promo Richard has a suspiciously good day on the golf course. Later, Larry attempts to capitalize on a friend’s unexpected death; takes issue with a pattern of discrimination at a trendy restaurant; and offers his dermatologist’s son a job.

HBO Curb Your Enthusiasm – Sunday, February 9, 10:31PM You’re Not Going to Get Me to Say Anything Bad About (Season 10 | Episode 4) Promo Travel plans go awry when Larry brings an impromptu date to a destination wedding. And, at the hotel, Larry finds himself in a sticky situation when he
goes searching for a toothbrush.

HBO Curb Your Enthusiasm – Sunday, February 2, 10:30PM Artificial Fruit (Season 10 | Episode 3) Promo Larry drops the ball when he gets the chance to make amends with Alice; Larry and Richard go to extreme lengths for their upcoming lunch date.

HBO Curb Your Enthusiasm – Sunday, January 19, 10:31PM Happy New Year (Season 10 | Episode 1) Promo In the season premiere, Larry kicks off the new year with a new rival–Mocha Joe. Later, at a cocktail party hosted by Jeff and Susie, Larry gets roped into lunch plans and has a misunderstanding with a caterer.

HBO Curb Your Enthusiasm – Sunday, November 26, 10:00PM “The Shucker” (Season 9 | Episode 9) Promo Larry is blackmailed by an employee and tormented by someone from his past. Meanwhile, Jeff and Larry pitch a new creative venture; and Susie gets turned on by a surprising source.

HBO Curb Your Enthusiasm – Sunday, October 29, 10:10PM “Thank You for Your Service” (Season 9 | Episode 5) Promo Larry commits a faux pas with Sammi’s fiancé, and tries to start over with his mail carrier and golf club security guard.

HBO Curb Your Enthusiasm – Sunday, October 8, 10:00PM “The Pickle Gambit” (Season 9 | Episode 2) Promo Larry reaches out to a familiar face; gives sartorial advice to a hotel guest; and tries to create a diversion to help a friend’s nephew.

HBO Curb Your Enthusiasm – Sunday, October 1, 10:00PM “Foisted!” (Season 9 | Episode 1) Video Clips In the Season 9 premiere, Larry offends Jeff’s barber, tries to get rid of an inept assistant and gets into hot water over a new project.

Season 9 Is a ‘Five-Year Log-Jam of Indignities’ 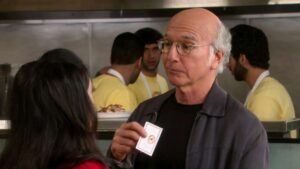 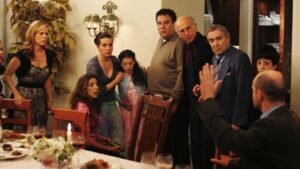 Sending Up Showbiz Through ‘The Marvelous Mrs. Maisel,’ ‘Curb Your Enthusiasm,’ ‘The Kominsky Method’

The show is renewed for season 11

Most of the cast can be found on this podcast “Origins” – first episode is about CYE!

Ted Danson is nominated for an Emmy Award for Lead Actor in a Comedy Series in “The Good Place.” The 2019 Primetime Emmy Awards, honoring the best in TV programming, will be handed out Sunday, Sept. 22. The show will air live on Fox starting at 5 p.m. PT from the Microsoft Theater in Los Angeles.

Larry David to Matt Lauer: ‘Curb’ Spoilers Are None of Your Business 9/27

Check out this podcast “Origins” – first episode is about CYE!

Larry David and Curb Your Enthuasiasm to return to HBO!

Larry David’s ‘Bern Your Enthusiasm’ is our new favorite show

Larry David On His ‘Seinfeld’ Fortune: “I Don’t Have That Kind Of Money”

60 Minutes: Who Is Larry David?

DESPITE THE LAUGHS, THE MONEY AND FAME, LARRY DAVID SAYS HE STILL COULDN’T WALK UP TO A WOMAN IN A BAR – “60 MINUTES” SUNDAY
He’s made untold millions laugh. He’s a celebrity worth many millions of dollars. Yet Larry David says he couldn’t walk up to a woman in a bar and say hello. That’s what the famous comedy and television star tells Charlie Rose in a dynamic and humorous interview to be broadcast on 60 MINUTES Sunday, March 1 (7:00-8:00 PM, ET/PT) on the CBS Television Network.
Asked by Rose whether his success as the co-creator of “Seinfeld” and the star of “Curb Your Enthusiasm” changed him, perhaps has given him confidence, he says, “It gave me something that I didn’t have, but not in the way that people think… like a total transformation.
“It wasn’t that at all,” he tells Rose, saying he is still the guy in certain ways that he always was. “I still… to this day, I still couldn’t walk up to a woman at a bar and say hello… I don’t have that.” Watch the excerpt.
David shows plenty of confidence acting each night in previews of his own hit comedy play, “Fish in the Dark,”” which opens on Broadway next week. But he tells Rose of his childhood, where he says he never joined anything and his mother showed little faith in him.
“In junior high school and high school I did not participate in anything,” says David. “I didn’t even know, I swear to you, I didn’t even know there was a prom.”
This lack of confidence was compounded by the fact his mother didn’t have high ambitions for her son. “A mailman… she wanted me to work in the post office… that was her dream,” he tells Rose. “It said a lot to me. It wasn’t only that she said that. That’s how I felt about it.
“Zero, zero belief in myself. And it’s changed somewhat, but there’s still a lot of that in me,” says David.
Rose’s profile includes footage from the new play and clips from David’s television program. 60 MINUTES also takes David back to his old apartment and his junior high school in Brooklyn.

Mario Cantone On ‘A Conversation With Susie Essman’

Jewish TV cliches are a thing of the past

HBO will develop a Curb Your Enthusiasm-style comedy show, but for Black Hollywood this time

Larry David’s Fictional Wife on the End of their ‘Marriage’ 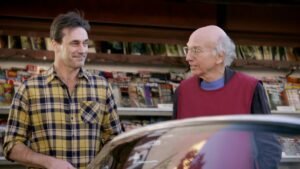 Other web sites about the show! 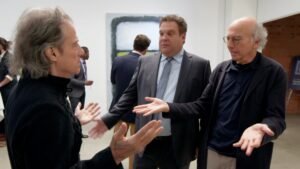 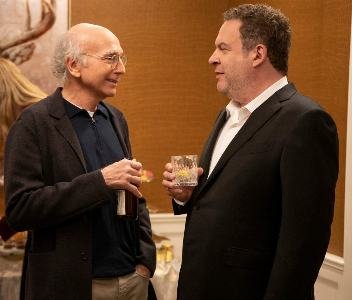 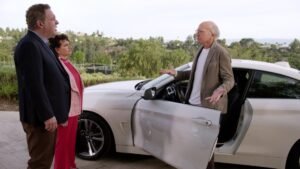 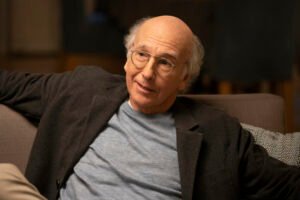 Write to the show! 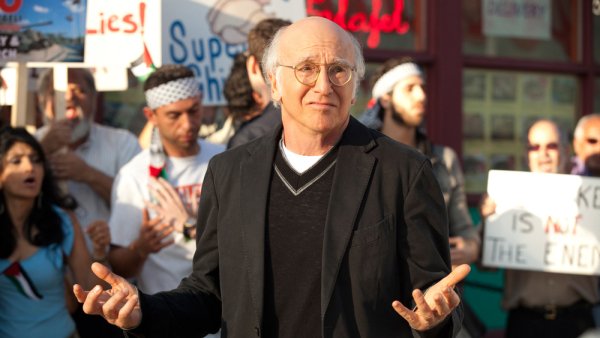 Send HBO an email about the show

Write to HBO or any of the actors c/o HBO

or send a letter to Larry David c/o

Profiles of your favorites! 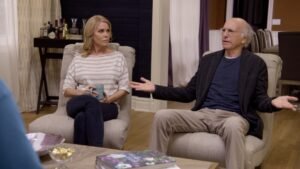 Larry David Larry is the star of the show as well as the writer. He plays himself, but nobody is really this clueless. He’s a comic genius. Larry the character is socially inept and very self-centered. He gets irritated by other people and situations (sometimes justified) but mostly ends up annoying other people with what he says and does. He gets himself into strange situations sometimes.

Jeff Greene Jeff is Larry’s best friend and lives nearby as well. Jeff is similar to Larry but is more jovial and gets along better with people. He’s also Larry’s manager. Jeff is married to a real shrew and has cheated on her. He and Larry are often getting into mishaps, but Larry is more the leader and Jeff is the follower.

Cheryl David Cheryl was Larry’s wife for many years on the show, but they got divorced. She thought she was too good for him because she was very pretty and better with people. Larry can be a real idiot sometimes, especially when it comes to people. Cheryl, like most of the people in this show, is very self-centered. Most of them are very spoiled and living in a rich-person’s Hollywood bubble. Cheryl was an actress but apparently not a very good one because she didn’t get too many parts. 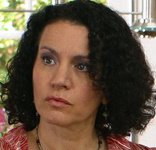 Susie Greene Susie is Jeff’s long-suffering wife who has a loud mouth and is very outspoken. Larry and Jeff do a lot of crazy, stupid things and she is the one who usually is there to yell at them for it. Then again, it would be really hard to be married to someone like her.

Richard Lewis Like Larry, Richard plays a fictional version of himself. We don’t know which is real and which is fiction. Richard is very neurotic and worries a lot (most of his comedy shows are about that, too). He often has a beautiful woman on his arm, but he usually ends up screwing up the relationship in one way or another.

Leon Black Leon is a distant relative of Larry’s ex-girlfriend Loretta. When she and her family left Larry’s house, he stayed. He and Larry are good friends and often get into trouble together.

Ted Danson He also plays a fictionalized version of himself. Ted in the show seems very laid back but often gets into fights with Larry. After he and his wife divorced, he dated Larry’s ex-wife, Cheryl.

Mary Steenburgen She also plays herself; she’s married to Ted Danson in real life. In the show, they were divorced. She briefly dated Larry.

Nat David Larry’s dad, who might be even more annoying than Larry.

Antoinette Spolar Larry’s previous receptionist, who kept a lot of his secrets…She was in the first four seasons.

Keysha Black She and Darryl are Loretta’s children.

Nan Funkhouser She’s married to Marty, until they divorce.

Wanda Sykes She also plays herself. Whenever Larry talks to her, he often ends up saying the wrong thing about black people. Wanda often gets annoyed with Larry for what he says and does, especially with regards to black people.

Who’s Who in the cast! 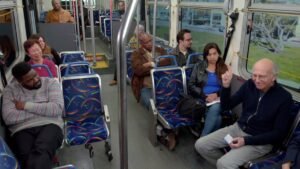 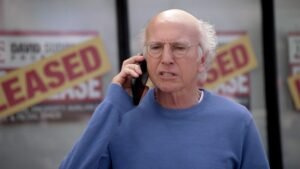 Most of this Info from Internet Movie Database

See our many other TV Cast Lists! 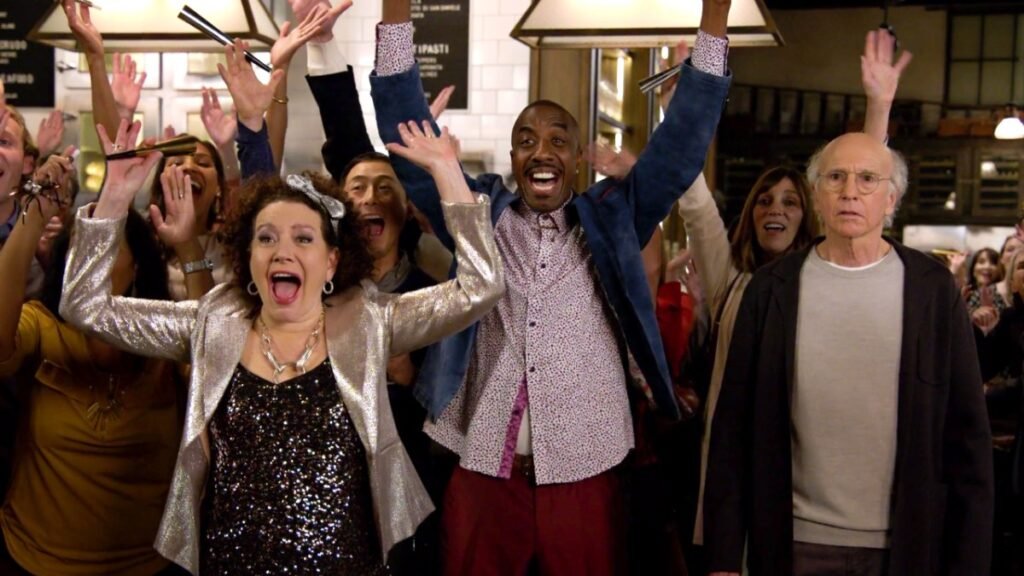 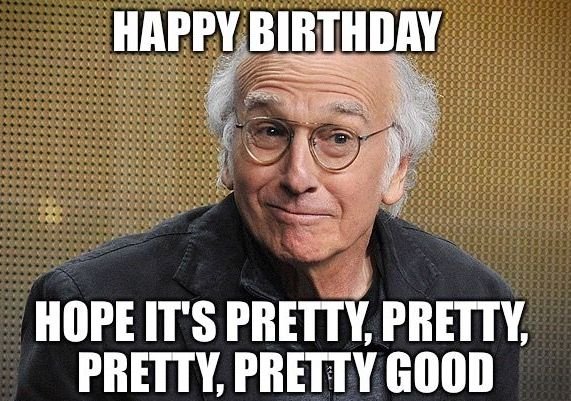 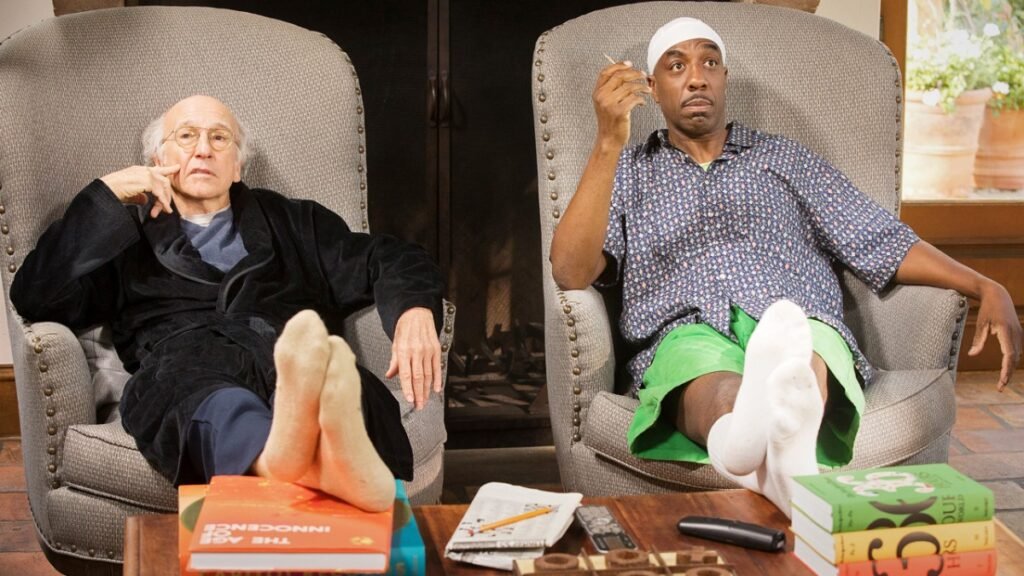 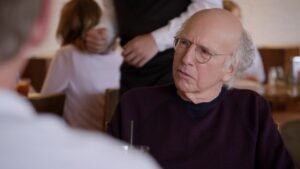 Where to find your favorite “Curb” actors! 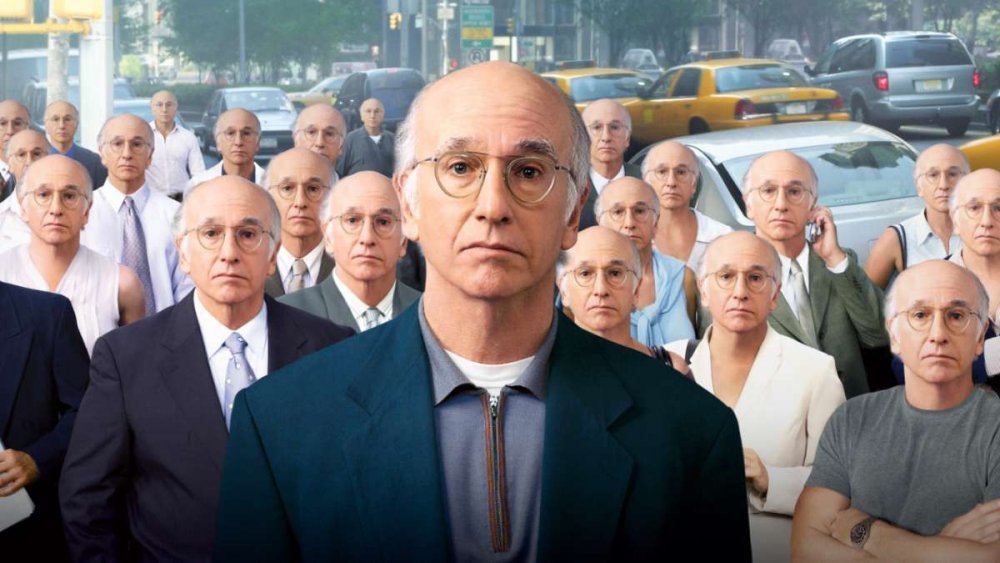 Cheryl Hines (Cheryl) stars in the next Bad Moms movie, “Bad Moms’ Moms.” She guest-stars on the new FOX show “I Can See Your Voice” Wednesday, September 23.

Richard Kind (Cousin Andy) appears in many TV shows and movies… busy guy! He also does voices on “American Dad” on TBS.

Jeff Garlin (Jeff) stars in “The Goldbergs” on ABC Tuesdays.

Wanda Sykes (Wanda)  has a recurring role on “black-ish” Wednesdays on ABC. She has several movies coming out, as well as the new Netflix series “The Upshaws.” She does voices in many animated series. You can see her standup tour dates on her website. She appears on “The Ellen DeGeneres Show” Monday, September 14 (Re-run from 9/20/19).

Jerry Seinfeld (Jerry) created and stars in the hit web series, “Comedians in Cars Getting Coffee”

Jason Alexander (Jason) has a bunch of new movies coming out.

J.B. Smoove does one of the voices in the new animated “Harley Quinn” series on DC Universe.

Julia Louis-Dreyfus has a few movies coming out.

Mary Steenburgen is one of the stars of “Zoey’s Extraordinary Playlist” on NBC. It will return mid-season. 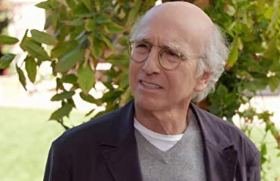