Willig plays family friend “André the Giant” and Tuisila plays Lia, the feisty grandma of young Dewey. It was quite a treat to speak with them. They do a great job on the show. I was especially interested to hear from Tuisila because we’re both from New Zealand! I was looking forward to asking Willig about how they got him a similar height to Andre the great, and his answer didn’t disappoint.

Question: Hi, Matthew, did you have any trepidation about playing a legend like Andre the Giant? Because you know, wrestling fans like me, we take Andre pretty seriously.

Matthew: [Laughs] You know, I didn’t…I think I was so into it right away and so excited about doing it that by the time, you know — literally as I booked the job, I was already watching videos and starting the voice process of it all. There’s no question that every now and then I will pause and say, “God, I hope to God that I am giving it some justice,” because that is so important to me.

After season one, I did have some really nice feedback, which is important. Number one, from Dwayne; and number two, from some people who either knew of Andre or knew him back in the day. So I’m not going to be perfect. I know it’s my interpretation. But yes, there’s obviously some trepidation.

It can be…there has been a few moments where I said, “God, am I even close?” You know, to this. But again, it’s my interpretation. I’m always bringing the love, trying to be honest as I can with it. And I’m hoping that’s kind of getting through.

Question: I just love the friendship between young Dewey and Andre. It’s probably my favorite thing about the show. And I’m wondering how we will see that continue to develop in season 2?

Matthew: Thank you. It’s obviously it’s my favorite part as well. And it’s something that I think, you know, people were not only shocked that there was that relationship, but number two, that it was close like that.

Yes, season two, you will see some more of Big Andre imposing his knowledge on little Dewey as he moves forward in life. The stakes are getting higher. The things that little Dewey is worrying about — girls, things like that, you know, love… Andre has some things to say and kind of, you know, as we go along, we see him sort of setting him straight. I’m looking forward to your guys seeing him, at least.

Question: Ana, we saw last season that your character was fighting to keep her wrestlers on her payroll. How will we see her handling her employees this season? And what kind of obstacles will she be facing as the promoter?

Ana: Thank you for the question. I couldn’t wait to answer your question because I’m so excited about season two, because you’re going to see more of Lia, in terms of answering that question. So just wait for season two because all will be revealed. There’s so there’s going to be more of her and her relationship with the so-called promoters in the wrestling field, and how she copes with trying to maintain her own business. So it’ll all be revealed in season two, and it’s more fun and funnier…a lot of, un-PC things will be happening. but, yeah, she gets the business rolling. And yes, it’s going to be in season two. So it’d be more about that to come. Yeah.

Question: Matthew, what kind of insight Did Dwayne offer you into his relationship with Andre when he was a kid?

Matthew: You know, it started with the fact that he called him Uncle Andre. He was literally that sort of character for him. You know, he was someone that was around that period a lot, always in and out of Hawaii. So, at that age, he didn’t see as the scary Andre. He saw the loving Andre, who he was. He used to treat him like a jungle gym, you know? So there was sort of that part of it, and Duane said right away, number one, the man embodied respect, which he learned very early on. And number two, there was a lot of love that he felt for young people and people his age. And he kind of even felt that back then, that Andre was almost like a kid himself. And I think we can appreciate the fact that someone that large and sort of that, uh, scary to a certain degree, the fact that he has that other side of him that is this loving, genuinely caring sort of individual. And so those are the kinds of things that Dwayne told me right off the bat and what has kind of led me into the character that I portrayed in the last two seasons.

Thane: Matthew, you are shorter than the real Andre. Do they give you lifts for your shoes, or (did they) just (use) camera angles to make you look taller?

Matthew: (Laughs) I’m always rooting for camera angles, but I will say that, when we first started, especially, there were lifts in my wrestling boots and also in the boots that I wore for everyday dress, which was a pain in the ass. I gotta be honest. I had a whole new appreciation for women and when they wear heels because I was basically wearing heels on set. So, yeah, so there’s that. Listen, I’m never going to be seven-foot-whatever Andre was, but I think even being 6’7/ 6’8, you know, I think we’re able to play with that and have that sort of distinction between,the normal size person and what Andre was.

Thane: Ana, what preparation did you do, if any, to play the role, since it’s based on a real person?

Ana: Very little is known about Lia Maivia, so the only preparation I had was help from, Dwayne Johnson, and his mother, Ata. So I asked for any dialogue or any tapes of…Well, they don’t call them tapes these days… Anything that could give me some idea of how she spoke. So, it was more information from Ata and Dwayne Johnson, and my own experience as a Samoan woman and mother sort of helped the role a bit because it’s very similar in terms of how strong and fearless she is. I mean, my own mother and mother-in-law are of the same ilk. So, in terms of that it wasn’t so hard. From knowing who Lia was, just feedback and information and advice from Dwayne and his mother, Ata.

Question: Ana, Lia is such a fun over-the-top character. Did you get notes from the family about how far you could take her?

Ana: Thank you. That’s a great question, but, no, I didn’t get any… limitation from the parents as how far. But from those that knew Lia, like Jeff Chiang, the writer… he grew up with knowing who Lia was. And Brian Gewirtz from Seven Bucks. They knew Lia, and they would say to me, “She was a hard case woman.” and “She had a great sense of humor and, you know, some of us were quite scared of it.” So it was all information from people who knew – and are part of the production team – who she was. So, it was just that information. And from, as I said before, Ata and Dwayne of who their mother was, and no, I just went with how it was written, from my own experience. And then, you know, from the producers and the writers (who would sometimes say, “Stop, I never got that.” So I think it’s more around experience and how the writers wanted it, and how the direction… so, and the family said, you know, they didn’t give me any, “don’t go too far because she’s–” I know from my own experiences.. (sound garbled here) But I must say she was a very un-PC woman, you know, if there’s such a word… she would just let fly. And that was wonderful. That’s the wonderful thing about her, that you can just say things, that you can wear slapping gloves and slap the wrestlers around. I love that. and it’s how she was and a lot of fun. Yeah.

Ana: Well, there’d be more of that in season two. There’ll be a lot of revelation around that relationship between Ata and Lia, in terms of passing on the business. And so, there are some twists and turns…but in terms of dialogue around their relationship, again, it’s about experience between mother and daughter, being a mother and a daughter of a similar age. So, I guess it’s the same with how I answered Stephanie’s question as a lot of feedback from the writers, from the production team who knew the relationship between these two. So there’s a lot of direction, a lot of advice and feedback, but also, from personal experience… and it’s also between Stacy and I, like, “Hmm, I don’t feel comfortable about that. Can we change?” So there was also some, Some vehicle for both Stacy and I to ask the writers if we could change a little bit so that it made it a bit more comfortable and a bit more real.

So there was a lot of talking behind the scenes before we filmed. So, I guess that’s what came across, which is really, really good to hear that it’s portrayed that way. And that’s how it was — a lot of work, but. you know, a lot of good personal experiences. Yes. 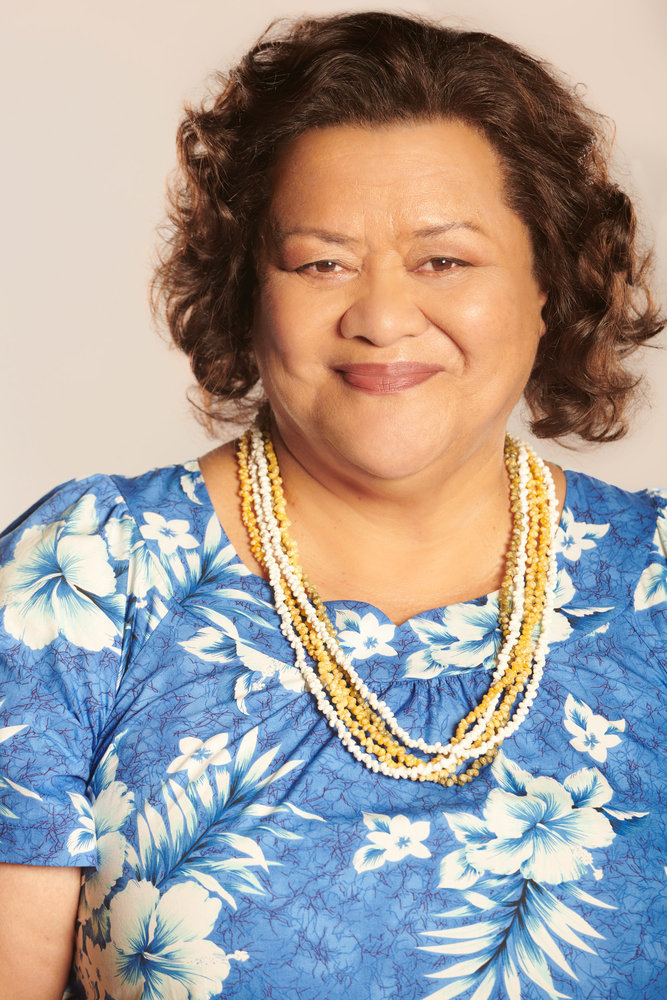 Ana Tuisila stars as Lia Maivia on NBC’s new comedy “Young Rock.” Tuisila’s career spans over two decades in film, television and theater. Her most memorable performance is in “The Songmaker’s Chair,” a stage production written by esteemed international author, poet and playwright Albert Wendt, and directed by Nathaniel Lees and Nancy Brunning. Following a successful season, the show later participated in the International Arts Festival at Te Papa Museum in New Zealand. Tuisila has starred in two short films on location in Samoa, Vai and Liliu, which have both been recognized throughout film festivals globally. She speaks fluent Samoan as well as having familiarity with other Pacific languages. 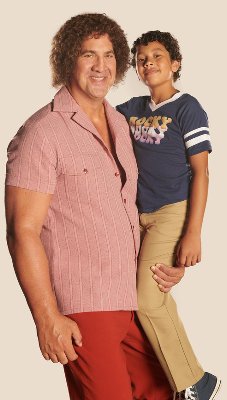 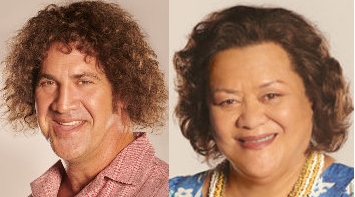