NBC’s entry into the streaming service market, Peacock, made its debut, and in order to see the original shows exclusively airing on the service you have to pay for either a subscription with ads or one without ads. Some shows, like the new “Cleopatra in Space,” require that you pay for ads if you want to see them at all.

The first show that interested me from their original shows is the David Schwimmer-fronted “Intelligence”.  Schwimmer plays Jerry Bernstein, the NSA liaison to a London-based cybersecurity firm.

Schwimmer is funny as a guy who acts like he has it all together, but the truth is, he has no idea what he’s doing and is very nervous about his new job.  He really wants to make a good a good impression on his British co-workers.  I like the comedic chemistry between Schwimmer’s character Jerry, and his boss Christine Clark (Sylvestra Le Touzel).

I wanted to watch this show because I have missed watching David Schwimmer in a comedy, and there are really funny parts of the show.  However, in the end,  I don’t think its funny enough because the British and American comedy styles just don’t mix well for me.  I might watch a few more episodes just to see if future ones are better.  If you’re struggling with what to expect, mix the British version of “The Office” with the American version and add a little of “Get Smart”.  I give this a 3 out of 5 stars, hoping it will improve.

This show is for mature audiences because it has several major bad words that are not needed.  I really don’t think that a comedy show needs the F bomb used several times. 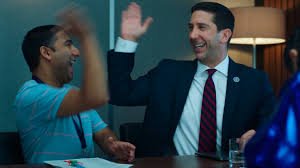