The Britbox Winter TCA panel started with the “Sister Boniface Mysteries,” which had premiered February 8, the day before, in the U.S. (in the UK, it premieres March 11 on the UKTV Drama channel). It’s a fun, quirky show, despite being a murder mystery. We had all three major cast members in attendance, as well as the producer, Will Trotter.

Sister Boniface (played by “The IT Crowd”‘s Lorna Watson) is an unusual nun who drives a Vespa around the small town of “Great Slaughter” and helps the local police solve murders. In the spirit of shows like “Murder, She Wrote” and “Grantchester,” this small town happens to have many murders. Although the series takes place in the 1960’s, Sister B. has advanced knowledge of forensics and a PhD in chemistry. The policemen, DI Sam Gillespie (played by Max Brown, whom you may recognize from “Beauty and the Beast” as well as many other shows) and DS Felix Livingstone (played by Jerry Iwu, “Sex Education”), are grateful to have the good sister’s help (as unusual as it is). The show is smartly written and is not only a good mystery series but explores issues that are still relevant today, such as sexism, racism, class division and more. However, the show is not at all preachy or heavy-handed.

Although Sister Boniface is very intelligent, Watson believes that she is quite innocent and has a “childlike element” as well as often being “silly.” Watson admits that she, too, can sometimes be “surprisingly naïve.” She has never played such a smart character before, so it was a “real joy” to put on the habit again. Getting into character was easy because the nun’s habit helped so much. She dubbed it a “quite transformative costume.” She also shared that the costume is quite freeing because she doesn’t have to spend much time in makeup. Before shooting, she spoke with the other characters playing nuns about where they would place their hands and so forth.

At Trotter’s urging, Watson told us an amusing story. When the director of the first episode, Paul Gibson, saw her, he acted like he didn’t know her because she was dressed as herself, not as Sister Boniface. He had no idea how she really looked out of the nun’s habit. He later came by and apologized. Lorna is hopeful that others will be the same way, so that she will be able to keep her anonymity if she runs into fans.

Watson told us that she had only ridden a Vespa once before, while on vacation. It took her quite a while to get used to driving it on the show to make it look natural. She also did a wheelie, but not on purpose. Brown joked with her about running the Vespa into his police car and how huge the Vespa’s sidecar is. Iwu joked that he “never felt terrified” while riding in the sidecar with her.

Iwu’s character Felix arrives in town in the first episode, expecting to be working in London, much to his disappointment. Eventually, the mistake is corrected, and he heads towards London, but of course, predictably, he ends up staying (I don’t think that’s really a spoiler). Not much else in the show is predictable, I’m glad to say. My only other observation about Felix is that he certainly wears a lot of suits for someone who came from a tropical country like Bermuda! Every TV show seems to have someone like Felix that arrives new into the situation so that he (and we) can be told what’s going on. Iwu told us that Felix observes about the town, “this is insane. Why is everyone killing themselves or killing each other?”

Brown noted that they all had great chemistry. The series started filming with episode 4, but they all “fell into our characters and our relationships” immediately. Watson agreed that they did “form a bond very quickly”. Brown observed that having all of these characters around in nun’s habits made them all want to behave better on set, but Watson and the other nuns felt that it was a very relaxed set. Brown and Iwu joked that a group of nuns is called a “gaggle.”

The cast was asked which mysteries they liked to read or watch.  Brown told us that his favorite mysteries to read are the classic Sherlock Holmes stories, but he’s also looking forward to the upcoming Hugh Laurie series, “Why Didn’t They Ask Evans?” (which comes out this spring on Britbox). Iwu grew up with “Murder, She Wrote.” Watson grew up with “Columbo” and also enjoys the Miss Marple movies. She joked that now she can solve the mysteries with her “new forensic skills.”

Trotter observed that the combination of Watson’s “fabulous face,” which he described as “owl-like,” combined with the habit and the glasses, gave them a lot of character to work with. He said, somewhat facetiously, “the blinking of the eyes every now and again are just like little messages to the directors: cut there, cut there, closer there.” Her pushing her glasses up on her nose became part of the quirkiness of the character. He also spoke a little bit about why we love mysteries so much, particularly this type, which he called “cozy crime.”

Trotter assured us that the Catholic Church has been fully supportive of “Father Brown” and most likely will for this show, too, because it doesn’t put them in a bad light, and the nuns are three dimensional characters (not caricatures). Also, the show is very light and fun. It doesn’t have blood and gore or other dark things.

The convent in the series is shot at a school, “Princethorpe College,” which used to be a convent, so it looks authentic. It has a chapel and stained-glass windows. Trotter’s children went there because he lives nearby. The rest of the show is mostly “shot in the Cotswolds” which is also where “Father Brown” is shot. He praised the area, which is “fantastic” with many large churches, homes and “beautiful rolling countryside.” He called the area “timeless,” which makes it great for shooting this show, set 50 years ago. He explained that “all the stone is the same and the architecture is just beautiful.” It was made “in the 16th century and so on.” Watson was “super-excited” to be there and to see where Sister Boniface sleeps each night, and to see her crime lab/winery. Iwu praised the locations they use as “beautiful” but observed that the convent in particular has a calming effect.

At the very end of our interview, Trotter revealed that the series has been renewed for season two (or as the Brits call it, “Series 2”). Everyone was happy and excited to hear it. Don’t miss this wonderful series, especially if you love mysteries. 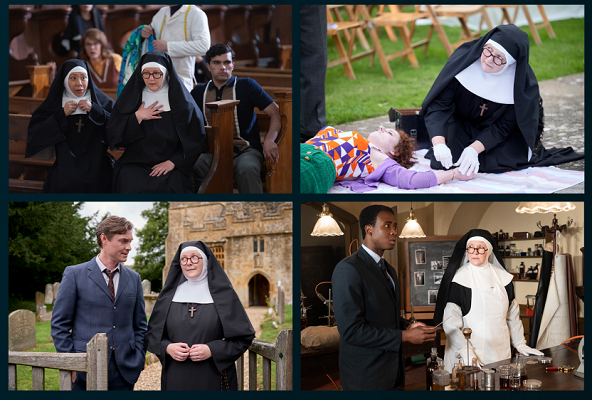 From the makers of Father Brown and Shakespeare & Hathaway – Private Investigators comes this light-hearted murder mystery series starring a Vespa driving, crime solving Catholic nun: Sister Boniface. It’s the 1960s and police forensics are rudimentary. Luckily the residents of Great Slaughter, nestled deep in the British countryside, have a secret weapon. Sister Boniface. This nun might be predisposed to forgive – but she’s also one hell of an amateur detective. If there’s evidence to be found, Boniface will find it, with a little help from dashing maverick DI Sam Gillespie and buttoned-up Bermudan DS Felix Livingstone, who’s horrified to be stuck in the eccentric world of Great Slaughter.

Lorna Watson BioLorna Watson is an actress and writer, known for The IT Crowd, The Wrong Door and Horrible Histories.She has a strong background in comedy as the co-creator of the sketch comedy show, Watson & Oliver.Most recently, Lorna reprised her role as Sister Boniface from the popular Father Brown series. She starsin the upcoming BritBox Original spinoff series, Sister Boniface Mysteries.

Jerry can currently be seen as the guest lead Oba in the latest series of SEX EDUCATION forNetflix.Following this, he will be seen as the series regular role of DS Felix Livingstone in The SisterBoniface Mysteries for Britbox/BBC Studios which will premiere in early 2022.After graduating from Royal Central School of Speech and Drama, he went straight intofilming Innocent (Series 2) for ITV opposite Katherine Kelly and Shaun Dooley. Alongside this, hefilmed a significant role in Intruder for Channel 5 and ITV Global.Prior to this, he played the role of Neville in the IFTA-nominated Conor McDermottroe’sfeature Halal Daddy opposite Sarah Bolger and Colm Meaney.Whilst at Central, he played the leading role in Sophie Treadwell’s Machinal directed bySuzanne Gorman.His other credits include Hastings in Richard The III, Stanley in Street Car Named Desire, Orsinoin Twelfth Night and Tuzenbach in The Three Sisters.

Max Brown BioMax Brown is an English actor with an impressive career spanning across film and television. Hefirst appeared on screens in 2001 to play Danny Hartson in BBC’s Grange Hill. Since then, hehas appeared in several hit television shows including The Royals, Mistresses, AgentCarter, Spooks (MI-5) and Foyles War. Some of Max’s most notable roles include EdwardSeymour in The Tudors for Showtime and Evan Marks in the CW’s Beauty and the Beast series.He has also been seen in films including the Downton Abbeymovie for Carnival Film &Television, 29/29 and Stone Village Films’ Turistas and Flutter for Sunrise Films. Most recently,Max played DI Sam Gillespie in Sister Boniface Mysteries, a new BritBox Original series.

Will Trotter BioAfter nearly 30 years with the BBC, in 2014 Will took up the role of Head of Midlands Drama.From his office in the Drama Village, Birmingham, he is responsible for overseeing a teamof over 200 people and delivering over 130 hours of Television Drama every year.Alongside the hugely successful Continuing Drama – Doctors, Will has consistentlydeveloped and produced new returning series including Land Girls, Father Brown, WPC56, The Coroner, and Shakespeare & Hathaway – Private Investigators and mostrecently Sister Boniface Mysteries. In the past year he also developed and Exec Produced afour-part serial of Oscar Wilde’s The Canterville Ghost for BYU.Will specialises in pre-watershed crime that has an international appeal – Father Browncurrently sells to over 230 territories, Shakespeare and Hathaway was the most viewednew TV series in its first year of the BBC Showcase event. Essentially though Will thrives onmaking great drama and exploiting ideas commercially and as part of BBC Studios. 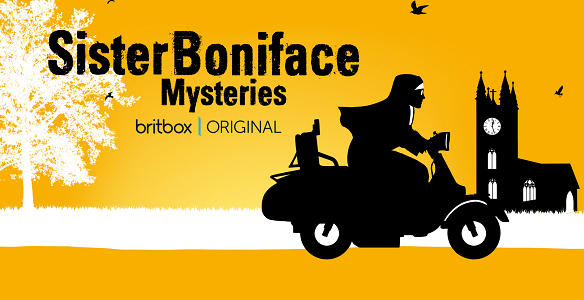