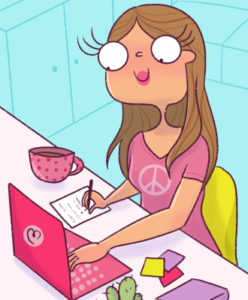 I have to apologize once more for not writing in this blog. My last year of taking classes just really made me too busy for anything else. Oh, I wrote a million blogs in my head, but when it came to actually writing them here….that was the problem. I will try to do better now that I’m working full time on the site again!

I hope you’re all doing well in this weird time.  In some ways, it’s a very good time for television because more people are probably watching than ever before (even if they’re watching on their computers, phones or tablets, and not on “traditional” TV). I’ve never seen so many people asking what they should watch, or talking about TV, on social media.  Of course, there are more people on social media, too, than before, I’m sure. Or I should say, there are fewer lurkers. I know people that never posted much at all before, and now they’re posting often.  A lot of people just have more time on their hands because they’re not working, they’re not traveling, or they’re not going out with friends… or anywhere else.  The big winners for this odd period in our lives are Netflix, Amazon, Facebook, Instagram, TikTok and Twitter, for sure.  Probably  Pornhub, too. 😉

The bad side of this for TV is that new shows are not getting made.  The sports channels are doing the worst because there are no new major sporting events to show (that will change soon, now that baseball is returning).  The other networks are suffering from not being able to film new shows. Fortunately, they all had many shows already filmed, but we don’t know what’s going to happen in the Fall yet. No one does. I read an article that said that, since there was no pilot season, the networks were just buying scripts. That is amazing!!  It will be interesting to see what comes out of that.  There won’t be as many new shows coming this Fall, though. It’s a shame, then, that they had to cancel “Emergence,” which I loved!! 😡

The soap operas are now going to be filming new episodes.  “Bold and Beautiful” on CBS started filming last week.  “General Hospital” on ABC and “Young and The Restless” on CBS are planning to start in July.  They have to prepare how they’re doing to do it safely as well as negotiate with the unions.  I think the primetime shows are watching to see how the soaps do it before they start themselves. I read that B&B will be using some blow-up dolls? I don’t know how I feel about that…

I just finished watching the Daytime Emmys, which were “virtual,” but at least they were finally back on TV. They’d been online-only for the past 5 years, which made most soap fans angry. I mean, really….we watch your shows, but you can’t be bothered to spend 2 hours for ONE night a year, thanking the soaps and their fans??  Anyway…It was a weird ceremony.  From what I  gather, each of the nominees was asked to send in a video, in case they won, with their acceptance s

peech.  I feel bad for the  actors that had to pretend they won, and then they didn’t win. Yikes.  Many of the actors this year mentioned the “Black Lives Matter” campaign or alluded to it in their speeches. What bothered me, though, was the lack of applause. I could ALMOST believe that the ceremony was real, except for that.  Canned applause would have been better, I think. Next year, if it must be virtual, how about renting out a giant theater, inviting the public, making everyone sit apart, with masks, and then just show them the virtual show, and record their applause? That would be more authentic, at least.

By the way, why the heck were last year’s Emmy winners Maurice Benard (Sonny, GH) and Jacqueline MacInnes Wood (Steffy, B&B) sitting next to each other on camera??? They weren’t wearing masks, either.  That was so bizarre and, frankly, a little irresponsible, I think. I mean, it’s fine if the two of them want to risk their health (and the health of their families), but it doesn’t show a very good example to the rest of the world.

I enjoyed their “Most Memorable Moments” from past  Daytime Emmy Telecasts. However, it would have been nice to see more from the 20th century. They only showed a few from before 2000. Also, I would have preferred to see more clips from the actual shows nominated, than clips from past awards shows. I think that was the worst part of the show.  Now, having said all that, I liked most of the wins. I was glad that Tamara Braun (who won for her work as Kim on GH), Heather Tom (Katie on B&B), Bryton James (Devon, Y&R) and Olivia Rose Keegan (Claire, Days) won.  However, I thought that Jon Lindstrom (Kevin, GH) should have won for Best Actor. Also, I was horrified that B&B won for best writing for that awful Beth baby switch storyline. It was horribly contrived and went on for 7 months.  Good idea, very poorly executed.  The other stories nominated were ALL better.

As usual, I’m trying to juggle everything, including my TV watching. I have too many shows on my DVR, so I’m always trying to watch stuff there. Then I get DVD’s to review, and I also have been trying to binge-watch a few shows that I really like, that I had fallen behind on. On my DVR recently I’m watching “Stargirl” on The C

W, which I like, as well As “The 100,” “In the Dark,” and “Burden of  Truth,” all on The CW. Also, I’ve been watching “Blindspot” on NBC and “Grantchester” on PBS. Lastly, I still watch “Full Frontal with Samantha Bee” on TBS; and “Real Time with Bill Maher” and “Last Week Tonight with John Oliver,” both on HBO.  Besides all that, I try to keep up on “Days of Our Lives.” It’s been nice not to have to watch the other soaps, but I am keeping the ones that are older ones. I save those to DVD.

Speaking of “Blindspot,” I’m still so mad that they killed off Edgar. I loved his relationship with Zapata.  He was the only black character left on the show! And now almost everyone left is white. How short-sighted of the showrunner, particularly in this day and age. What were they thinking??

In my binge-watching, after catching up with all the other CW superhero shows, I watched the rest of “Star Trek: Discovery,” “Picard” and “The Mandalorian.”  I also watched a great miniseries from AMC called “Quiz.” It’s only three parts and worth watching (based on a real story).  I tried to watch “Homecoming” on Amazon (starring Julia Roberts) yesterday because everyone said it was so good.  It was very boring, so I don’t think I’ll keep watching. It was an interesting drama but just way too slow.

What did you think of the Daytime Emmys? What are you watching now? Let us know in the comments! 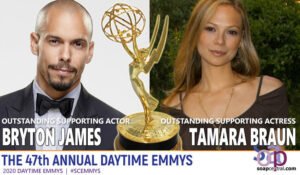