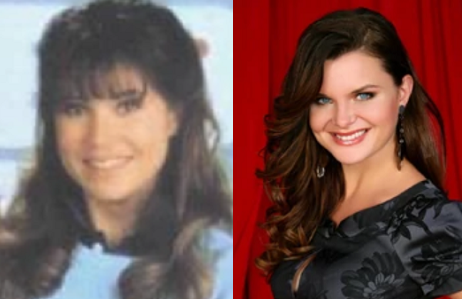 Katie is a very sweet and kind person. She always felt like the ugly duckling compared to her two older, beautiful sisters. She’s worked most of her life, since their father abandoned the family when she was very young. She’s worked a lot at Forrester Creations, aside from a brief tenure at Spencer Publications.  Right now she’s head of Public Relations at Forrester.

In the past, she was involved with Rocco, Thorne, Nick, Wyatt and Ridge. Her greatest love was Bill Spencer, with whom she had her son, Will.  Katie was one of the original characters of the show, when she was a teen, but she was gone for many years and only returned in 2007. Katie was accidentally shot in the heart by her brother, Storm.  He shot himself so that she could have her heart.

Katie is now very close to her sisters as well as Liam and Eric.

Katie has mostly been a good person, but she did sleep with Nick when he was engaged to her niece, Bridget. At times she’s had some mental problems. After her son was born, she had post-partum depression.  Later, she took a gun and almost shot Quinn. She briefly had a drinking problem. She and Bill had many fights and legal battles.  Katie is very strong and has overcome many obstacles.

Liam and Bill had reunited but not yet remarried. They were raising their son, Will, together. However, Katie was shocked to learn that Bill and Brooke had been making out in March, 2020, before Thomas’ wedding (it was caught on video).  Katie is angry at them both. It remains to be seen whether she’ll forgive either of them.