Thomas grew up in a wealthy family, but his parents constantly were breaking up and getting back together again, and his mother was presumed dead twice, which no doubt left its toll on him and his sisters (and his step-siblings). Rick had a troubled past, especially as a teen. When he came back from boarding school, he set fire to Rick’s house and blew up his car to keep Steffy away from him.  He went through counseling for that and made peace with Rick. Later, he and Steffy sent fake text messages to try to keep Ridge and Brooke apart. He and Steffy squabbled and caused some other problems. Later, he developed a bit of an obsession with Brooke. He renamed her line Taboo and kissed her on the runway, and then he creepily kissed her later as she slept. They were stranded on an island after a plane crash and took hallucinogenic drugs, which made Thomas believe that they’d slept together. He wasn’t sure, though. His grandmother, Stephanie, bribed him with Forrester shares to get him to say that they did have sex (to keep Brooke and Ridge apart). He agreed but couldn’t go through with it. Thomas was dating Dayzee, who begged him not to do that, but they broke up.

Later, Thomas took an interest in Hope and worked with Steffy to keep Liam and Hope apart.  Then he competed with Rick for Caroline.  Rick and Thomas argued more when Thomas was interim CEO while Ridge was out of town.  They had a fight, and Rick crashed through a second-story window, so Thomas lost Caroline. Thomas hoped to take over the company after Stephanie died, but Steffy found a DVD that proved she left it all to Eric.  Thomas and Rick had a fashion showdown to decide who would be president, but Thomas lost.

Thomas moved to the beach house with Oliver. A while later, he moved to Paris.  Then he moved home again for Aly’s funeral. He still loved Caroline, even though Ridge was married to her. He slept with her, not knowing that she was combining alcohol and pills.  She didn’t recall the night, so they agreed to forget about it. Thomas then went on a romantic spree, kissing and dating as many women as he could. After a fight with Ridge, Thomas left town again. He returned to find that Caroline was pregnant. Caroline swore Ridge was the father, so he moved in with Ivy, planning to seduce her after a bet with Steffy.   Unfortunately, Ivy was electrocuted during a fight with Steffy, so both she and Thomas blamed themselves.

Thomas became a new man when Douglas was born; he was very close to his “little brother.” When it came out that Ridge was the father, after a time, Thomas wanted to be a family with Caroline and Douglas, but she wasn’t interested. He dated Sasha for awhile, and then tried to make a family with Caroline in New York, but it didn’t work out.  Throughout all of this, Thomas felt rejected by his family because he wasn’t promoted to where he thought he should be. He took up with Sally and invested in her company.  Bill and Caroline concocted a scheme to make Thomas think that Caroline was dying, so that he would leave Sally and cause her financial ruin. Later, he found out about the lie and dumped Caroline, returning to take Sally and her family to New York to start again. It didn’t work out, and he dumped Sally once more to be with Caroline and Douglas.

Thomas returned after Caroline passed away. He tried to convince Hope to dump her husband, Liam, for him and be a mother to Douglas.  In doing so, he took Sally as his confidante (strangely enough), and the secret ruined her relationship with Wyatt.  While Thomas has always been a schemer, this new version of him seems to be way more amoral and twisted.  During his plotting, Thomas kept mum about Steffy’s adopted daughter Phoebe really being Beth.  He terrorized his son and broke up his dad and Brooke and tried hard to sway Hope to his side. He even wooed Zoey to make Hope jealous and almost married her. In March, 2020, Hope, Liam, Steffy and Zoe banded together to foil his plans (and his wedding to Zoey). He hasn’t been seen since. Hopefully he’s getting some much-needed mental help.. 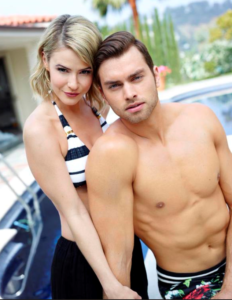 Read all about Thomas’s full history at Soapcentral