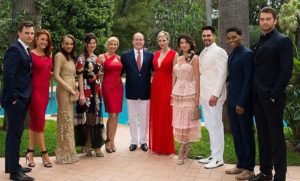 Courtney Hope (ex-Sally) and her new husband Chad Duell (Michael, GH) are rumored to be splitting up (after fewer than 2 months of marriage). They’ve both deleted a lot of photos of each other on Instagram.

Rumor has it that Justin is the one who killed Vinny and then framed Bill and Liam for it. He wants to take over Spencer Publications.

A very good source tells me that Ally Mills (ex-Pam) was fired before her husband passed away.

I wouldn’t be surprised if the reason the show let Karla Mosley go is because they decided to focus on younger people (like Zoe and Zende).  Karla will be missed.

Prediction: Ridge and Brooke will break up again before the pandemic is over.

Rumors: The  show will start back to work next week.

Brad Bell (showrunner) is being pressured by CBS to add more diversity to the cast.

The new rules because of COVID-19 may demand that actors don’t get too close to each other, no hugging, no kissing and no love scenes.

Wyatt may go darker and take Thomas’ place as the new bad boy.

Predictions: Ridge will go back to Vegas and spend time with Shauna for a while. He’ll ask her to marry him.  Katie won’t forgive Bill, Brooke or Quinn any time soon. Wyatt won’t catch Sally and Penny hiding Flo’s body any time soon. Eventually, Flo will talk Sally into doing the right thing.  Sally will get out of going to jail because of temporary insanity. Flo and Wyatt won’t press charges. Sally will keep her job at Forrester. Penny will feel slighted and get revenge.  Maya will finally reveal why she and Rick split up. Pam and Charlie will wed. Zoe and Carter will date.

Rumors: Liam and Hope will continue to focus on their family. Someone may teach Flo a lesson about being Beth’s fake birth mom. Brooke may turn to Bill again for comfort. Thomas may get his revenge on Liam and Hope for stealing Douglas. The show may start shooting again in June. Billy Miller (ex-Drew, GH; ex-Billy, Y&R) will be cast as a new love interest for Steffy.

After Thomas’ plans are revealed, he’ll be depressed. Someone will kill him, and there will be a long list of suspects: Liam, Hope, Steffy, Zoe, Ridge, and Brooke head the list.   The murderer will turn out to be either Zoe or Vinny.

Wyatt will fall in love with Sally all over again. Sally will get a treatment or cure, so she won’t really die.  Flo will be left out in the cold. 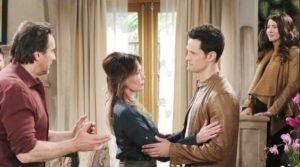