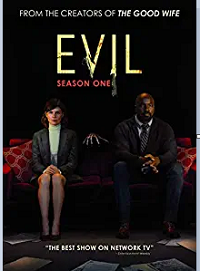 This is a good show, which isn’t surprising, since it’s written by the same writers that make “The Good Fight” and made “The Good Wife” (husband and wife team Michelle and Robert King)  You might be surprised that the writers, who are so good with legal and political shows, would do a horror show.  That means you forgot their previous CBS show “Braindead,” which was a horror-political-satire back in 2016.  Sadly, that one didn’t last longer than a year. In part, I think it’s because it was a little gross, and in part, it tried to do too many things at once. Not say that there isn’t some humor in “EVIL” because there is plenty. It’s mostly serious, though.

“EVIL” is about a team of three – David, an ex-journalist, now training to be a priest (Mike  Colter); Kristen, a psychologist (Katja Herbers) and Ben, the tech guy (Aasif Mandvi).  The team investigates events that may be spiritual, such as possessions or miracles.  David is a believer, of course.  Ben is a skeptic.  Kristen is somewhere in between. She isn’t sure what to think. Most of the show is seen through her eyes. The Catholic church pays for them to investigate these possible demon- or angel-involved events. The marvelous Christine Lahti plays Kristen’s mom.  The show gets more interesting when we see the flaws of the characters. It can also be creepy and scary, like any good horror show.

Make no mistake, this is a show about the supernatural. In the very first episode, we meet Leland (the wonderful Michael Emerson), who is either the devil or working for him.  Kristen is visited by a demon named George in her dreams.  Each episode has its own event, but there is also a larger story arc here, involving 60 demons.  As you watch more episodes, you learn more about the story arc.  I’m not saying it’s a perfect. There are some things in the show that don’t make a lot of sense. For instance, in the first episode, Leland steals her therapists’ notes and then uses them against her with the criminal she’s been analyzing (in her previous job, working for the D.A.). So why doesn’t she press charges against him? Her therapist saw the guy and could identify him.  They merely glossed over it in the second episode, with the D.A. saying that Leland explained his account was hacked. At the end of another episode, a man they have been investigating jumps off the roof. They never mentioned that again. Sometimes the characters do things that just make me scream at the TV, “Why are you doing that? Stupid!” but not too often.

It’s compelling drama, fun horror (and sometimes very scary), and well worth watching, despite a few flaws. I’m very glad to have the DVD because I didn’t watch the show regularly when it was on TV. I’m glad it got renewed for a second season, too.  If you’re very religious, especially Catholic, then you may not like it.  You’ll have to watch it and judge for yourself.  I’m sure it would be extra fun to watch this during Halloween.  Some of the episodes are  very scary, such as the Christmas episode, or the one where David is in the hospital. The show really exploits our fears, like things in our ears, or creepy children, or being in the hospital.

There are a few great extras. First, they have deleted scenes for many of the episodes. There are also two nice features. One is “Season One: Genesis” and the other is “Does Evil Exist?”  The first talks about the show and its background. The second is very interesting and a bit philosophical. You should definitely watch this DVD.

Description: Evil is a psychological mystery that examines the origins of evil along the dividing line between science and religion. The series focuses on a skeptical female psychologist who joins a priest-in-training and a carpenter as they investigate the Church’s backlog of unexplained mysteries, including supposed miracles, demonic possessions, and hauntings. Their job is to assess if there is a logical explanation or if something truly supernatural is at work. 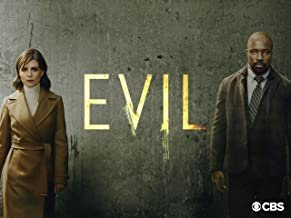