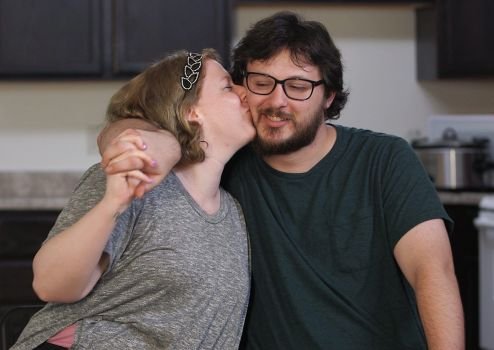 I had never seen this show before, but I enjoyed watching it. I’m not a big fan of reality shows, but they do this one well. It’s HBO, so of course they do. I watched most of the episodes to prepare for this interview.  I would say that Jake and Chelsea are the most stable of the three couples and are more likely to stay together.  The guys in the first couple have way too many jealousies and hangups.  The second couple is long-distance and already having problems with it.  Jake and Chelsea live together and seem to be doing fine.

I’m also not a gamer, but I have a brother, a sister-in-law, and a brother-in-law who are all into gaming. They’re older people, but nowadays most young people do play video games of one sort or another. I was taking classes part-time until recently, and most of my fellow students were gamers.  They even have a Game and Animation Design major.  Watching these gamers on this show, I can tell you that there are many people like this who spend most of their free time gaming.

Anyway, hope you enjoy the interview. They seem like nice people.

1. So how did this show come about for you?

Jake – Chelsea actually found it and wanted to try it. And here we are now.
Chelsea – I think I had tagged us in at a Comic Con on Instagram, and I got a random message from someone with the casting call so I asked Jake if it was something we should apply for. I genuinely didn’t think we would be chosen for it.

2. Have you watched the episodes?

3. Do you feel like the final “cut” is accurate and they treated you fairly?

Jake – N/A
Chelsea – Yeah, I feel like it’s pretty genuine, but it was definitely weird seeing our faces on HBO Max.

4. Did you meet the other couples in the show?

Jake – We did not.
Chelsea – Nope, we know as much as you all know from watching the show.

5. Have you gotten good or bad feedback from gamers about the show?

Jake – I’ve gotten a lot of positive feedback in regards to the show.
Chelsea – I haven’t had any feedback from gaming friends, just from family, and they think its cute.

Jake – I am your average IT guy.
Chelsea – I manage a beauty supply store.

7. Are you both still living in Kansas?

Jake – Yes we are. Just moved but still in Kansas
Chelsea – Yep! Different area from where we were at time of filming, but still Kansas.

8. How long have you been together now?

9. Any plans to do more TV or online streaming shows?

10. Jake, please tell us about your podcast.

Jake – I am part of a podcast called The Boss Battle Show with my two friends Adam and Gordy. It’s a show where we talk about video games and news related to them. Currently we are on a break as we reorganize some stuff and figure out some formatting, but we should be back to it soon enough.

11. Have you heard anything yet about a possible season 2?

Jake – I have not, no. Chelsea has shared that she may be interested in a season 2.
Chelsea – We haven’t heard anything about there being a 2nd season yet, but I’m not opposed to doing one if the opportunity arises.

Jake – I play D&D, at certain points in the year, 4 times a week. I play Magic Arena a lot now. At one point I was trying to go pro in physical Magic but the cards weren’t in my favor. No pun intended.

Chelsea – D&D is not something I have gotten into like Jake has. I’m not big on the roleplaying aspect of it, to be completely honest. But we do have a campaign that we’re playing with one of my best friends in Australia that started out as a one shot for her husband’s birthday that we’ve decided to continue. And as far as Magic goes, I played a few games with Jake a while back and never really played again.

13. Chelsea, what do you miss most about California?

Chelsea – Number one would 100% be my family and friends. It’s been a few years since the move, but it’s still really hard being away from them. I also miss Disneyland, as silly as that is. I had an annual pass and went a ton. And something I didn’t think I’d miss but I actually do is the beach. I didn’t go a whole lot, but there’s been days where I wish I could go, and now that I can’t, I miss it.

14. Have you experienced Winter in Kansas yet?

Jake – Several times over.
Chelsea – Yep! I think that’s one of my favorite things living here is having the different seasons. I always get super excited when we get snow!

15. How has the virus affected your lives?

Jake – It’s been a big change. I personally had some plans this year for us. Experience new things. But the virus had other plans. For now. We stay in as much as we can.
Chelsea – It’s been a really weird time, that’s for sure. A few trips back home have had to be cancelled for now, so that’s fairly upsetting, but it is what it is. We’re just still trying to do what we can to quarantine as much as possible.

16. What do you hope that viewers take away from watching your show?

Jake – Love can be found in all kinds of places.
Chelsea – That you can start out a relationship online and have it turn out to be something amazing.

Gamers-in-Love Docu-Series follows Three Couples from Virtual to IRL (In Real Life); 12 episode series produced by Stage 13, Magical Elves Shows the Love that comes from Behind the Avatar

LOS ANGELES – June 11, 2020 – Stage 13, the award-winning and EMMY© nominated original content studio, and Magical Elves, leading producer of award-winning, non-fiction content including “Nailed It!,” and “Top Chef,” have premiered their gamers-in-love docu-series “Happily Ever Avatar” on HBO Max. The 12-episode short-form series follows three young couples who find love while playing a video game and take the leap from virtual to real life.

The series was created by Stage 13 and Magical Elves to show couples going from finding their match virtually to real life. With the enormous popularity of multiplayer games, people around the world are linking online like never before. Games like World of Warcraft, League of Legends, and Elders Scrolls are connecting people online, and some are even falling in love…behind their avatars. Follow three young couples that meet online through their avatars. From long-distance lovers meeting IRL (in real life) for the first time to happy couples who are faced with the next stage of their relationship, viewers will see how they all play the game called love. As in gaming, some move to the next level of their relationship and see if these n00bs’ (newbies) love connection can survive the virtual and real world.

Amadeus Balmaceda and Karoline Rodriguez
Amadeus and Karoline met playing Elder Scrolls Online. They immediately bonded over their Latin heritage and began a virtual relationship. Amadeus considers leveling up on their relationship and traveling from Texas to Connecticut to finally meet Karoline in person. Even if making that trip confirms their feelings, the couple must face the challenge of a long-distance relationship. Will Amadeus move to Connecticut for Karoline, or will their love buckle under the many miles that separate them?

Chelsea Caldwell and Jake Norton
Jake and Chelsea met playing World of Warcraft. After an initial dislike of each other, they bonded during an all-night raid that left the two of them talking constantly. After months of constant communication, they officially became a couple…before ever meeting in person. Then after living together in California for two years, Jake’s job takes him to Kansas, and Chelsea decides to join him. Faced with adjusting in Kansas, Jake finds himself content with his virtual friends while Chelsea is homesick and wants to make friends IRL. Despite their social life, both know they want to be together forever, but is Chelsea more ready for marriage than Jake?

Nick Theurer and Tony (Anthony) Bernardo
Nick and Tony met at a League of Legends gaming tournament. For Nick, it was love at first sight. He forced their teams to play against one another and ultimately won a date with a reluctant Tony, who thought Nick was straight! Nick wants to ask Tony to move in with him, but Tony is still hesitant about trusting Nick. Will Tony’s insecurities push Nick away, or will he be able to commit and truly fall in love?

“Happily Ever Avatar” was produced by Stage 13 with Magical Elves for HBO Max.

“We wanted to show the union of gaming and love, and the notion that we live in and with technology and people find each other in different ways. One is through the world of gaming by using avatars to showcase their personality. It’s a different way of showing love,” said Shari Scorca, VP, Unscripted, Stage 13.

“When we were making ‘Happily Ever Avatar,’ you could tell this was something special,” said Casey Kriley and Jo Sharon, co-CEOs of Magical Elves. “The experiences of real-world couples who developed true relationships through the world of gaming resonated with us in a meaningful way. We are so happy we are able to showcase these unique people with diverse backgrounds and their love stories.”

“Watching a couple meet for the first time in person really cannot be topped and we see that in this series,” said Allison Schermerhorn, Executive Producer and Showrunner. “We tried to show all levels of relationships, including the relationship of an LGBTQ gamer couple. Anyone who’s met online knows there’s a big difference between talking with someone in-game, over email and text, and seeing and talking to them in person. We show what it’s like from that first meeting through being connected in real life, not just through an avatar in a game.” 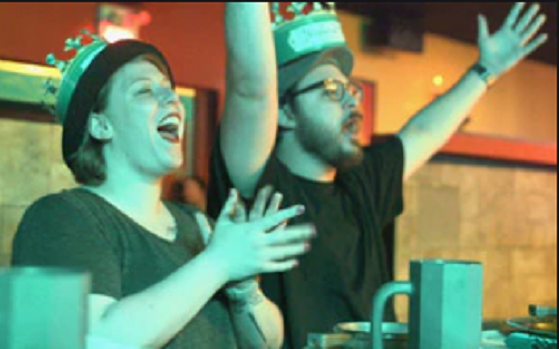