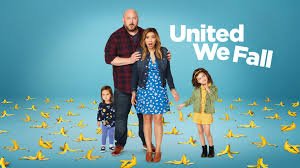 I wanted to watch this show because the commercials for it looked funny, and I enjoy watching sitcoms.  Comedies are my favorite thing to watch on television, so I’m always looking for a new sitcom to watch.  I was not too impressed with “United We Fall” as I thought the show was going to be funny since Jane Curtin (Saturday Night Live, Kate & Allie, 3rd Rock from the Sun) is in the cast.

Will Sasso plays Bil,l and Christina Vidal plays Jo – couple raising two young daughters, who are constantly wondering if they’re good parents.  Bill’s mother Sandy (Jane Curtin) got sick two years ago, so Bill and Jo let her move in with them, so they could care for her.  Sandy is now better but doesn’t want to move out of their house.  Sandy is also very critical of the way Bill and Jo are raising her granddaughters. I think Will Sasso and Christina Vidal have great chemistry and are believable as a married couple.  They’re also funny, but I think that, at times, they try to make them funny by doing these long monologues in which they yell at each other, or someone else, telling that person that they don’t know how hard it is for them to raise their little girls (which are not that funny).  I also think that they are wasting Jane Curtain’s talent by not using her enough, and by not including her enough in the main story of the show.  They should make her part of the main story of the episode, not give her a different story to play which has nothing to do with it.

I give this show 3 out of 5 stars because they need to make the cast more of an ensemble and get them all  involved in the two different stories of each episode so that at the end of each episode, both stories can end, and the audience feels like these characters are a family and not people just living together with their own separate lives. 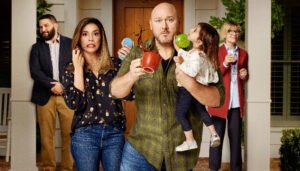