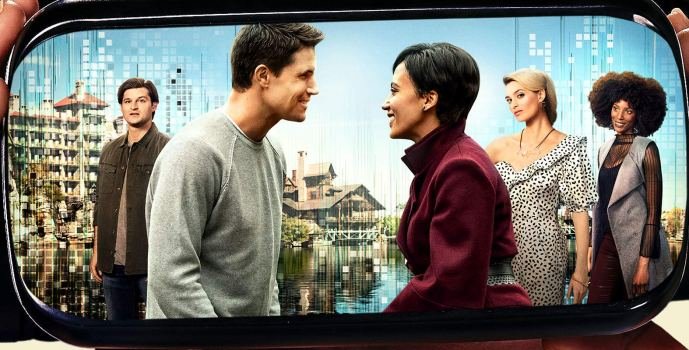 I watched this show because I just love Robbie Amell. It hooked me right away, and I watched the whole first season. I don’t usually binge-watch because I don’t have much free time, and I watch a lot of shows for my site. This one is worth it.

I will caution you that it has a somewhat-sad ending, but I’m sure we will see it resolved in the second season.

The show is set in the future, where there is an afterlife of sorts, set up by a major internet corporation. You can choose to have your mind put into the computer, and then you live in a type of heaven. Those who have a lot of money live in the best type of heaven. Those without much money live in a more limited version. Hard to believe, but society is even more deeply divided by rich and poor than it is now.

The hero of this show is a self-centered, handsome, young programmer named Nathan (Amell), who comes from a working class family. He and his partner, Jamie (Jordan Johnson-Hinds) have developed ground-breaking software. Nathan has a rich, beautiful, very shallow girlfriend named Ingrid (Allegra Edwards). When Nathan’s automatic car has an accident and he’s rushed to the ER, his girlfriend uploads him into her rich people’s heaven. He ends up falling in love with Nora (Andy Allo), a woman that works for the corporation that runs it (a customer service person, basically).  While Nathan and Nora fall for each other, they uncover a murder plot and more.

The show is one part comedy, one part romance, one part mystery, and one part wry social commentary. The plot unfolds in a very interesting way, and things happen that you won’t expect. The best shows have many layers that unfold gradually to shock you without seeming too complicated. This is one of those. It’s delightful.

You should check it out. This is my favorite show this year. I can’t wait for the second season.

“Upload” is a sci-fi sitcom that takes place in the near future, where people who are near death can be “uploaded” into a virtual afterlife of their choice.

Series stars Andy Allo (Pitch Perfect 3) and Robbie Amell (The X-Files), and will premiere globally on Amazon Prime Video in over 200 countries and territories

“I’m thrilled to be once again working with Greg and Howard on this new series,” said Vernon Sanders, Co-Head of Television, Amazon Studios. “They’ve made some of the best comedies of the last three decades and I know our Prime Video customers are in for a treat when Upload premieres.”

“Amazon is the perfect place to make Upload,” said Daniels, “because of their strong creative team, and because it’s a company that could actually one day host a digital afterlife. If I get in good with them, I’m hoping for a big discount on my first thousand years.”

Upload is a sci-fi sitcom that takes place in the near future, where people who are near death can be “uploaded” into a virtual afterlife of their choice. In 2033, secretly romantic Brooklyn-born Nora works customer service for a luxurious virtual reality environment. When handsome L.A. party boy Nathan’s self-driving car crashes, his high-maintenance girlfriend uploads him permanently into Nora’s VR world. Upload is created and written by Daniels who also serves as showrunner, executive producer and will direct the pilot. The series stars Allo and Amell and is executive produced by Klein.

Amazon Studios creates original television series which premiere exclusively on Amazon Prime Video which is available globally in over 200 countries and territories. This year, Prime Video will premiere a number of original series, including the highly anticipated Tom Clancy’s Jack Ryan starring John Krasinski, Homecoming from creator Sam Esmail and starring Julia Roberts and Bobby Cannavale, The Romanoffs from nine-time Emmy Award winner Matthew Weiner, and a third season of The Man in the High Castle. 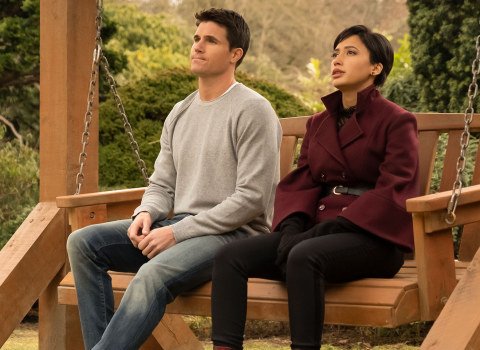