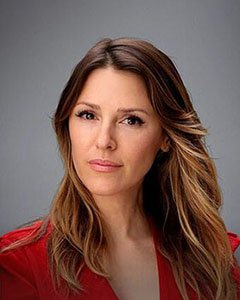 Chloe Mitchell came into this world as Kate Valentine, daughter of Katherine Chancellor’s maid, Esther Valentine.  She was sent to boarding school at a young age.  Several years later, Chloe Mitchell arrived in Genoa City to be a fashion coach for Lily Winters, who won the “Fresh Face of Jabot” contest.

When Chloe found out she was pregnant, she tricked Cane Ashby, Lily’s boyfriend, into thinking he was the father by getting him drunk and staging a “morning after” scene.  Cane married Chloe, and we found out that Chloe really was Kate Valentine.  Billy Abbott returned to Genoa City and, knowing he was the real father of Chloe’s baby, let Cane believe Cane was the father.  The truth finally came to light, though, and Cane got back together with Lily while Billy married Chloe.  Chloe had a daughter they named Cordelia (Delia for short), but the marriage was a disaster.  Billy’s heart belonged to Mackenzie Browning.  Chloe and Billy were divorced and she started dating Billy’s nephew, Chance.  Chloe and Chance became engaged but broke up when he could not contain his feelings for Heather Stevens.  To get even and make Chance jealous, Chloe slept with his half-brother, Ronan Malloy.  Chloe talked Kevin Fisher into letting her move in to his apartment.  They became best friends and eventually lovers.  Kevin and Chloe were married with Delia’s blessing.

Chloe and Kevin have had their ups and downs but value their marriage and friendship.  They are involved in a joint business venture with Adam and Chelsea Newman called TagNGrab, a fashion website.

Chloe is a wise-cracking bundle of energy who brings fun amongst all the drama in Genoa City.  She usually acts before she thinks, but she has matured a lot since returning home with a chip on her shoulder. 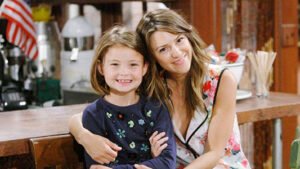