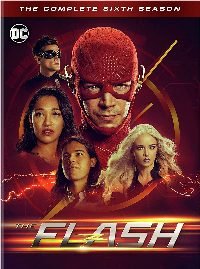 “The Flash: The Complete Sixth Season” Review by Suzanne 8/30/20

This is my favorite superhero show, and that’s saying a lot because there are many of them (and I watch them all). Every season has been fantastic. The characters and relationships are very well-defined.  They sometimes kill off characters and sometimes bring them back (just like most shows nowadays). This year we got a little less of Cisco and a little more of the other characters.

The season was cut a little short, by 3 episodes, thanks to the coronavirus. That makes sense because it didn’t really feel like a typical “Flash” ending at the end of the year. It will be great to see what happens in Season 7 (especially to Iris and Ralph). The show never disappoints with good acting, drama, action and occasional humor.

This is a pretty good DVD collection. There is a special noir version of one of the episodes, and commentary. There is the usual gag reel and deleted scenes, and last year’s San Diego Comic Con panel. It’s worth having if you’re a fan of the show.

Catch Up (If You Can) With The Fastest Man Alive!
THE FLASH:
THE COMPLETE SIXTH SEASON
Contains All 19 Electrifying Episodes From The Sixth Season,
Plus A Never-Before-Seen
“Kiss Kiss Breach Breach – Noir” Episode With Commentary
Own the Blu-ray™ & DVD August 25, 2020
Blu-ray also includes a Limited-Edition Bonus Disc
with All Five Episodes of the DC Crossover Event
Crisis on Infinite Earths and 6 Crossover Bonus Features!
BURBANK, CA (May 19, 2020) –Just in time for the seventh season premiere of the highest-rated series on The CW, fans will be zooming into stores to pick up The Flash: The Complete Sixth Season as Warner Bros. Home Entertainment releases the Blu-ray and DVD on August 25, 2020. Averaging over 1.8 million viewers weekly*, viewers will be able to speed-watch all 19 gripping episodes from the #1 series on The CW, plus a never-before-seen “Kiss Kiss Breach Breach – Noir” episode with commentary by showrunner/ executive producer Eric Wallace. Other special features include: The Best of DC TV’s Comic-Con Panels San Diego 2019, deleted scenes and a gag reel. A limited-edition bonus disc featuring all five DC Crossover Event Crisis on Infinite Earths episodes will be available exclusively for fans who purchase the Blu-ray.  The Flash: The Complete Sixth Season is priced to own at $39.99 SRP for the DVD ($44.98 in Canada) and $44.98 SRP for the Blu-ray ($49.99 in Canada), which includes a Digital Copy (U.S. only). The Flash: The Complete Sixth Season is also available to own on Digital via purchase from digital retailers.
*Source: Nielsen NTI, Most Current data 9/23/19 through 4/28/20
Last season, Team Flash spent the last year dealing with not one, but two Cicadas, the return of Eobard Thawne, aka Reverse Flash, and the surprise arrival from the future of Barry and Iris’ daughter, Nora West-Allen, aka XS. The stakes were higher than ever during the season five finale. In season six, Team Flash contends with not one, but two all-new villains – Bloodwork and Mirror Master!
“After six strong seasons, The Flash continues to score in ratings andranks as the top series for The CW,” said Rosemary Markson, WBHE Senior Vice President, Television Marketing. “This must own set is filled with in-depth bonus content that fans and DC fanboys will be eager to check out to add to their Blu-ray or DVD collections; including the all-new black and white version of the “Kiss Kiss Breach Breach – Noir” episode with commentary by showrunner/ executive producer Eric Wallace.”
With Blu-ray’s unsurpassed picture and sound, The Flash: The Complete Sixth Season Blu-ray release will include 1080p Full HD Video with DTS-HD Master Audio for English 5.1. Featuring all 19 episodes from the sixth season in high definition, as well as a digital code of the season (available in the U.S. only).
The Flash stars Grant Gustin (Arrow, Glee), Candice Patton (The Game), Danielle Panabaker (Sky High, Friday the 13th), Carlos Valdes (Arrow, Once), Hartley Sawyer (Caper, Glory Daze), Danielle Nicolet (Central Intelligence), and Efrat Dor (The Zookeeper’s Wife, Mayans M.C.), with Tom Cavanagh (Ed, The Following) and Jesse L. Martin (Law & Order). Based on the characters from DC, The Flashis produced by Bonanza Productions Inc. in association with Berlanti Productions and Warner Bros. Television, with executive producers Greg Berlanti (Arrow, Supergirl, DC’s Legends of Tomorrow, Riverdale), Eric Wallace (Teen Wolf, Z Nation,Eureka) and Sarah Schechter (Batwoman, Riverdale, Black Lightning, Supergirl).
SPECIAL FEATURES
BLU-RAY BONUS DISC
19 ONE-HOUR EPISODES
DIGITAL
The sixth season of The Flashis also currently available to own on Digital. Digital allows consumers to instantly stream and download all episodes to watch anywhere, anytime on their favorite devices. Digital is available from various retailers including iTunes, Amazon Video, PlayStation, Vudu, Xbox and others. A Digital Copy is also included with the purchase of specially marked Blu-ray discs (available in the U.S.) for redemption and cloud storage.
THE BASICS
Street Date: August 25, 2020
BD and DVD Presented in 16×9 widescreen format
Running Time: Feature: Approx. 836 min
Enhanced Content: Approx. 136 min
DVD
Price: $39.99 SRP ($44.98 in Canada)
4 DVD-9s
Audio – English (5.1)
Subtitles – English SDH
BLU-RAY
Price: $44.98 SRP ($49.99 in Canada)
5-Discs (4 BD-50s + 1 BD-50 BONUS DISC)
Audio – DTS-HD Master Audio 5.1 – English
BD Subtitles – English SDH
About Warner Bros. Home Entertainment Inc.
Warner Bros. Home Entertainment (WBHE) brings together Warner Bros. Entertainment’s home video, digital distribution and interactive entertainment businesses in order to maximize current and next-generation distribution scenarios. An industry leader since its inception, WBHE oversees the global distribution of content through packaged goods (Blu-ray Disc™ and DVD) and digital media in the form of electronic sell-through and video-on-demand via cable, satellite, online and mobile channels, and is a significant developer and publisher for console and online video game titles worldwide. WBHE distributes its product through third party retail partners and licensees.
About DC
DC is one of the largest English-language publishers of comics and graphic novels in the world and home to some of the most iconic and recognizable characters ever created. As a creative unit of WarnerMedia, DC is charged with strategically integrating its stories and characters across film, television, consumer products, home entertainment, interactive games and the DC Universe subscription streaming service. For more information visit dccomics.com.
THE FLASH and all related characters and elements are trademarks of and © DC Comics. 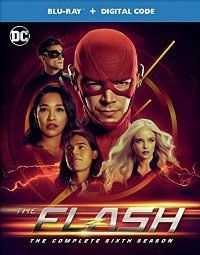