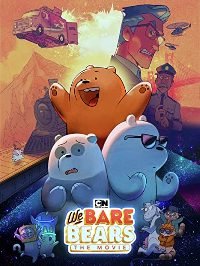 I had never seen or heard of this Cartoon Network series before. I have no idea if the movie is comparable or not, but it’s a fun movie that people of all ages can enjoy. Unlike many Cartoon Network shows, it doesn’t have violence, bad language, etc. It’s a cute show about some bears who are friends and hang out together as brothers. One is a grizzly, one is a panda, and one is a polar bear. It ran for four seasons until last year. I’m glad they were able to make this movie. I hope it’s successful and that they can make more. The series was based on a web series and the TV show is an international series.

The three bears, Grizz, Panda and Ice, are bears that try to live in San Francisco along with humans.  In this movie, we see how they first got together when they were very young bears.  When the bears rush through the city, knocking people and things over, they get humans angry at them. One of the things that the bears do is “stack,” i.e. stand on top of one another, which humans find to be strange.  An evil wild life control agent named Trout wants to separate them and them back to the wild (voiced by Marc Evan Jackson, who played the evil Shawn in “The Good Place”), so the bears go on the run. It’s a good story and has many characters, including their friend, Officer Murphy, the park ranger. You may also recognize the famous voices of Ellie Kemper, Jason Lee, and Patton Oswalt.

This would make a great present for anyone who enjoys animated shows (especially children). The DVD has a lot of great extras for those who are really into these characters. Check them out below! 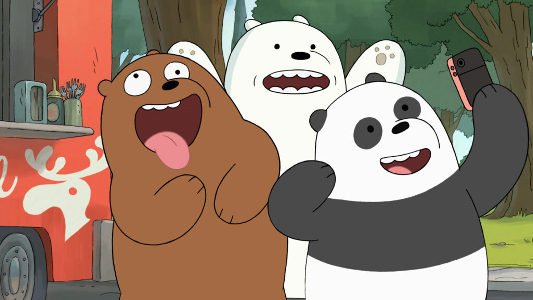