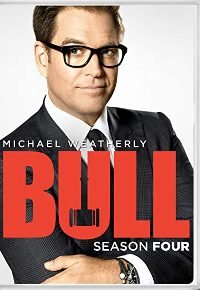 I don’t normally watch this show, but I love Michael Weatherly (who plays the title role). The rest of the cast is good, too. I think they’ve really improved it a lot since the first season, when I saw a few episodes and wasn’t thrilled with it. Sometimes it takes a while for a show to really build what it’s going to be.

A lot happens this season as Bull prepares for father hood with his ex-wife, Izzy (Yara Martinez) and has to make up with her brother, Benny (Freddy Rodriguez).  Benny is his main lawyer, and he can’t win trials without him. The two had a falling out in the previous season.

The writers keep the show exciting with many interesting cases, and there is also a lot of humor and fun dialogue between the characters (when the show is not being heavily dramatic).  Their cases vary between murder, wrongful death, fraud, assault, negligence and more. I like that this show focuses on the jury and voir dire. So few legal shows do.

Anyone who enjoys drama should like the show. Like most series this year, it was cut short due to COVID, so there are only 20 episodes instead of 22. That’s still a lot of great TV episodes to watch, but it means that the final episode was not meant to be the final episode. There is no cliffhanger or any kind of feeling that it’s the last episode of the season.

There are only two main features. They have audio commentary on two of the episodes, and a “behind the scenes” feature about the season. It’s done well, despite the fact that many of the actors were obviously being filmed via remote camera.

Action-packed crime drama Magnum P.I.: Season Two will be arriving on DVD this year on  September 1. Starring Jay Hernandez as Tom Magnum, an American hero and Navy SEAL returning from war who uses his military skills to become a private investigator in Oahu, Hawaii.

Dr. Jason Bull and his psychological tricks are back again when Bull: Season Four arrives on DVD on September 8. Starring Michael Weatherly, Dr. Bull uses his psychological skills and high-tech data to persuade the jury, witnesses, attorneys. His sharp-witted charm and tactics leaves clients uneasy, that is until they are proven not guilty and walk out the courtroom free.

Bull: Season Four
Street Date: September 8, 2020
Format: DVD
Description: BULL stars Michael Weatherly as Dr. Jason Bull in a drama inspired by the early career of Dr. Phil McGraw, the founder of one of the most prolific trial-consulting firms of all time. Brilliant, brash and charming, Dr. Bull is the ultimate puppet master as he combines psychology, human intuition and high-tech data to learn what makes jurors, attorneys, witnesses and the accused tick. His personal life proves harder to manage as he tries to live a healthier lifestyle following a heart attack and learns he is expecting a child with his ex-wife. Bull employs an enviable team of experts at Trial Analysis Corporation to shape successful narratives down to the very last detail. This includes his quick-witted former brother-in-law, Benny Colón, a lawyer who acts as defense attorney in the company’s mock trials; Marissa Morgan, a neurolinguistics expert from the Department of Homeland Security who monitors shifting jury reactions in real-time for Bull; former NYPD detective Danny James, the firm’s tough but relatable investigator; Taylor Rentzel, a working mother and former colleague of Marissa’s who is an expert in coding and computer hacking; and Chunk Palmer, a former all-American lineman and stylist-turned-law student who helps clients prepare their look and testimony for trial. In high-stakes trials, Bull’s combination of remarkable insight into human nature, three Ph.D.’s and a top-notch staff creates winning strategies that tip the scales of justice in his clients’ favor.