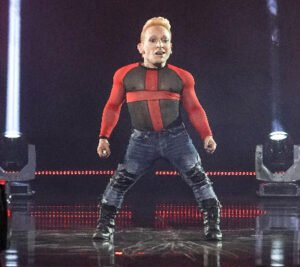 This was such a fun interview with Alan! He’s got a lot of personality and talent. I hope you enjoy this as much as I did. I’m so excited to watch Tuesday’s show to see who wins…

Here is the audio version of it.

Suzanne: Hi, Alan. How are you?

Alan: Yes, I’ve been rehearsing and practicing and creating. It’s been kind of like a roller coaster right now.

Suzanne: Well, congratulations on advancing to the finale.

Alan: Thank you. Thank you very much. It’s really exciting.

Suzanne: Sure. Did you go out and celebrate?

Alan: No, we didn’t have much time to celebrate. I think we’re going to have to just maybe have a big celebration when everything is finished, for sure.

Suzanne: And you must have something pretty big planned for the finale?

Suzanne: Yeah, I’m sure everybody’s looking forward to seeing what you have up your sleeve.

Alan: I think that’s what I what I see most of the time. People are like, “I can’t wait to watch what you’re going to come up with next for your next performance.” So, I think people have the expectation already to see something different. So, I’m excited.

Suzanne: Yeah. And among the other contestants, who do you think is your greatest competition?

Alan: Oh, my gosh, that’s a great question, because, for me, I think all of them are my greatest competition. I mean, we’re all different in different talents. Everybody’s so talented, but we’re all different. Now we have, for example, the Bellow Sisters. They are more in my field, which is the performance, acrobatic arts. They are competition for me. Then, we have the other people. They’re not categorized in that category, but we have the BAD Salsa; they’re great dancers, and so dynamic. Then, we have the singers. We have Roberta [Battaglia]; it’s so amazing to hear her sing, and she’s so young to have that voice and that talent. Then, we have Daneliya [Tuleshova], and we have Cristina Rae. You have so many people – Brandon Leake. You know, for me, literally all of them are a huge competition for me. But, you know, at the end of the day, I think [I am] my own big competition. I’m competing against myself and trying to be better than I was last time, basically.

Suzanne: So, now that you’ve been on the show for a while, what has surprised you the most?

Alan: Well, I did have some surprises with people that actually ended up going home who I didn’t think were going home. That was, I think, for me, one of the biggest surprises that I had in terms of results. At this point, I don’t think anything surprises me anymore, because everyone’s game at this point. Everyone made it to the finals, so I can’t really tell if there is one exact thing for me that is a big surprise.

Suzanne: Okay, and besides not falling or hitting those spikes, what was your biggest challenge so far?

Alan: Oh, my gosh, every time it’s been a big challenge, especially in the quarter finals when I had so much trouble with with the weather and being wet, trying not to slip and fall. That was really stressful at the moment. I think, for me, right now, one of the biggest challenges that I’m having, is that I injured my shoulder. So, to be able to deliver a great performance for the finals with an injured shoulder, that, for now, is my biggest challenge.

Alan: Yeah, I mean, we have everybody here that can help us out, but it’s just because of one of the movements that I did. Basically, I pulled my muscle, my shoulder, like the ligaments. So, there’s not really much that they can do for that, just try to rest, and it will heal itself, but that means if I rest, I’m not going to be prepared for the finals. So, I decided to push forward and keep going, trying to be as safe as possible.

Suzanne: Sure. Now what precautions have they taken to minimize everyone’s risk to the Coronavirus?

Alan: Oh my gosh, this is huge; the precautions they took are really big. They’re really serious about that. Yeah, we have to be wearing a mask all the time. We’re actually tested every other day for COVID. They want to make sure that everyone is safe, keeping the social distancing at all times, even when we have to be transported; it’s like 1% of the time in the car and things like that. So, they’re being [careful] with the food and everything. It’s sealed. They’re being super, super, super cautious about everything.

Alan: I am in LA, yes. We even have to be quarantined; we’re not allowed to go anywhere.

Suzanne: That’s good though. Do they put you up in a hotel and provide all of your meals and that kind of thing?

Alan: Yeah, they take really good care of us. We are in a beautiful hotel, and we are not far from the studio, so it’s easy to go for practice and during shooting days and all of that. It’s beautiful. The way they do everything is really high level. We are treated like superstars.

Alan: Oh, yes. It was my brother, who was Alfredo from the games. He competed on season eleven.

Suzanne: Did they put him up in the same place? Or do you know?

Alan: I don’t think it was the same place.

Publicist: I can answer that. It wasn’t the same place, because we were at the Dolby Theatre at the time, but now, due to COVID, we’ve moved the production to Universal Studios.

Suzanne: Oh, so it was a different hotel. I was just curious.

Publicist: Different parts of town. We’re in Universal Studios right now, and the Dolby Theater is in Hollywood.

Suzanne: Okay. And how many hours a day do you practice normally?

Alan: Well, for the last two days, I practiced from three until ten – three in the afternoon until ten at night.

Alan: Yes. [laughs] It’s a lot of work. People sometimes don’t think that. I guess they think I just go out there and fly. [laughs]

Suzanne: And you live in Las Vegas, right?

Suzanne: So, you must be glad to get away from the temperatures there a little bit.

Alan: Right, because it’s so hot. It was like 118 before I left Vegas. I don’t know what the weather is like now, but it’s been pretty warm here too. I mean, it’s very similar, and I kind of like it; it’s like the summery [months].

Suzanne: That’s good. My sister lives in Vegas, and I think she said it was going to be around 100, so I guess it’s come down a little bit.

Alan: It’s so funny. You can literally just like fry an egg on your windshield.

Suzanne: [laughs] I know. Their air conditioning went out for a few days, and they live in apartments, so they were just dying.

Alan: That’s the worst, right? That happened to me before. [laughs]

Suzanne: So, are you are you still performing in Vegas? If people go to Vegas, can they see you perform there?

Alan: No, they cannot, because when the whole COVID situation [started], the shows closed, and none of us have the jobs now.

Suzanne: Oh, they haven’t reopened the shows at all?

Alan: No, so I don’t have a job to go to now. I don’t have to work, so it was just perfect timing for me to be on AGT and eventually earn a spot. And that would be a dream come true, if I can have my own show in Vegas. That would be amazing.

Suzanne: Wow. I had no idea. I knew they’d opened the casinos up. I didn’t know they hadn’t opened the shows up. That’s interesting.

So, I read that you want to act. Do you have an agent yet for that?

Alan: I don’t have an agent yet. I did a couple of things in the past, acting-wise. I don’t know if I can talk about it, but I did (unintelligible) in 2007. But I would like to go that route, because it’s something that I really love. I’ve always been passionate for acting; it’s just opportunities didn’t come up. So, hopefully people can see me in a different light and it will open up more doors and opportunities.

Suzanne: Yeah, sure. I mean, if you win this, surely you’ll get some connections from that.

Suzanne: So, last question, what would you like to say to your fans out there?

Alan: For my fans, I just would like to say, I really appreciate all of them. I’ve been receiving so many messages of love from them and support. I really, really appreciate it. They think sometimes that we don’t read the messages, but we do get to read them. Sometimes we cannot reply to everyone, and I apologize, because it’s a lot of people to reply to, but I just want to tell them that, if anything, I just want to be able to inspire them and to just bring hope for them, and that they know that they can reach for the stars, that the sky’s the limit, and they can pursue their dreams and goals. I just hope that they see me up here, getting to the finals; I just hope that they look at me and say, “Hey, if he did it, I can also do it.”

Suzanne: Alright, well, thank you. I really appreciate you taking the time to talk to me, especially on a Saturday.

Alan:
It’s okay. Thank you so much. I really appreciate you reaching out. 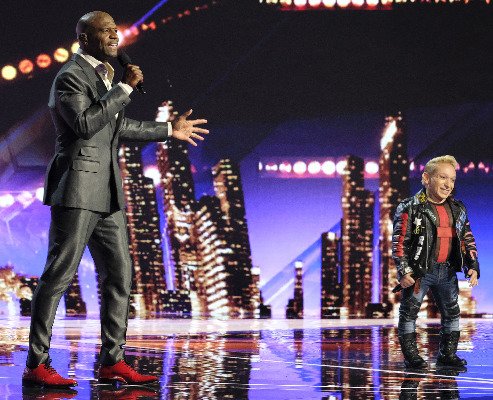 Alan’s Bio:  Alan J. Silva was born in Brazil. He comes from a long line of performers and is the sixth generation of circus performers in his family. He started performing at the age of 6. He trained in and performed many circus disciplines, including but not limited to Russian bar, clowning, tumbling and flying trapeze. It wasn’t until he was 16, though, that he found his true passion was aerial silks. Soon after mastering his craft, he traveled Brazil, performing as the first male artist to fly on aerial silks for circuses and festivals all over the country. Then in 2000, he had an opportunity to audition for his dream circus that only accepted the best of the best artists to be part of the company. However, it wouldn’t be for another two years that he’d be called to create a character and act for the show that would eventually open on the Las Vegas strip. Since 2003, Alan has called the USA home and is proud to have earned his citizenship in 2017. While working and living in Las Vegas, he met and married his wife, and they are now parents of two amazing young children that may follow in his foot steps 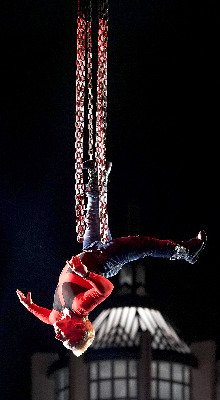