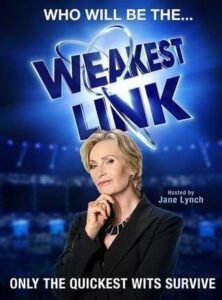 I was so excited when I heard The Weakest Link was coming back on television it was one of my favorite game shows when it first aired in 2001. The show is the American version of a British game show of the same name. In the 2001 version, British host Ann Robinson basically told contestants they were dumb and terrible losers using one-liner jokes while she looked deadly serious.

The latest version of the show is hosted by Jane Lynch who is a good game show host but she doesn’t do too well with the jokes that make fun of the contestants. In my opinion this is because the British are much better at this serious type of deadpan humor. The group of eight contestants answer six rounds of trivia questions and after each round of play, the contestants vote on who they think the weakest player is and that player known as the weakest link is eliminated. Once the six rounds of trivia questions have been played, two players go against each other and the player who answered the most questions in one minute wins all the money the team of eight contestants has put in the bank in the earlier rounds of play.

I give this show 5 out of 5 stars because I enjoy game shows that involve trivia and I think that if you enjoy trivia centered game shows where contestants win a lot of money you will enjoy this show.

The new version of “Weakest Link” will deliver the fast-paced and quick-witted pillars of the original British format created by the BBC with a few modern twists. The hybrid game show sees contestants answer general knowledge questions to bank prize money across multiple rounds. At the end of each round, the contestants vote out who they perceive to be the “Weakest Link” remaining.

“I’ve been a longtime fan of this game-changing quiz show since it first debuted,” said Lynch. “Each time the phrase ‘You are the Weakest Link. Goodbye.’ passes my lips, it will be with great reverence and delight.”

“‘Weakest Link’ became an instant fan-favorite when it first aired on our network, and we are excited to bring a fresh, new take to the timeless format,” said Meredith Ahr. The President of Reality and Alternative Group of NBC Entertainment. “Jane Lynch has been a beloved staple in our NBC family for years, and her sharp wit and engaging personality will be the perfect match for this highly entertaining game show.”

For 20 years, “Weakest Link” has been the fastest and fiercest quiz show on television. The massively successful format distributed by BBC Studios has been produced in 44 territories around the globe. With over 1,500 episodes having aired in the UK alone.

The original run of “Weakest Link” on NBC launched on April 16, 2001 with 15.1 million viewers. Giving NBC its biggest audience in the timeslot with regular programming in nearly five years, since May 1996. For that season, “The Weakest Link” averaged nearly 13 million viewers to rank among television’s top 35 primetime broadcast series. 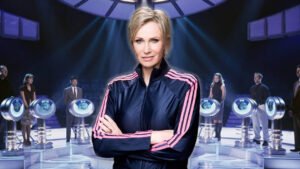