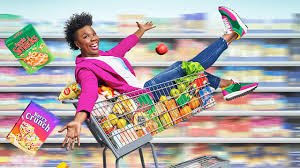 If you have been reading my tv show reviews for a while, then you know I enjoy game shows. One of my favorite game shows in the past was Supermarket Sweep because I always wanted to be able to put any groceries I wanted in my cart without having to worry about the price. Leslie Jones (of SNL fame) is the executive producer and host of the new show.

The show is very simple to play. There are three teams of two who play three rounds of trivia, where they test their knowledge of food and grocery brands. The contestants add seconds to their sweep time for every question they answer correctly. Once the trivia rounds are over, the team that has the most minutes goes first to go around the market, with the goal of putting the most expensive items in their cart in order to win the game. The best part of the show is when all three teams are running around the market, putting groceries in their cart and picking up inflatables and other items to earn bonus points. The team who has the most money in groceries and bonuses wins the game and has a chance to run another sweep where they could win one hundred thousand dollars.

I really enjoyed Leslie Jones as the host because she said in one episode that she was a fan of the former version of the show that was on Lifetime. Because she is a fan of the show, she is truly rooting for the contestants to win. Jones gets excited when the contestants win, and she roots for them when they are running the sweeps. If you enjoy game shows like I do, you will enjoy this one. It really is fun to watch. I really think this will be a great addition to the ABC fun and games block of game shows.

ABC is bringing back the classic TV game show “Supermarket Sweep,” hosted and executive produced by Emmy® Award-nominated comedienne and actress Leslie Jones. Produced by Fremantle, the fast-paced and energetic series follows three teams of two as they battle it out using their grocery shopping skills and knowledge of merchandise to win big cash prizes. The original format aired on ABC from 1965-1967 and went on to become a global sensation. It was adapted in 13 international territories and, most recently, relaunched in the UK. Production on the 10-episode order is set to begin this spring. An airdate will be announced at a later date.

“I’ve always dreamed of being on ‘Supermarket Sweep,’” said Leslie Jones. “Seriously, I tried out for the show years ago; and after getting turned away, I knew I’d have to take matters into my own hands. Being able to bring the iconic game show back to life on ABC is my ultimate redemption story!”