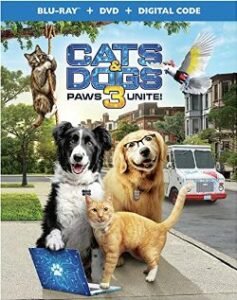 This is a fun family movie. I enjoyed watching it. It has a lot of humor and action. I didn’t see the first two movies, but it didn’t matter at all.

This is a live action movie, not a cartoon. The human drama involves two single-parent families who live in an apartment building. One family is a mother and her teen boy. He’s a tennis phenom, and she’s a bit of a stage mother.  He owns the dog named Roger (voiced by Max Greenfield).  The other family is a musician and his teen daughter.  She owns a cat, Gwen (voiced by Melissa Rauch). The cat and dog are secretly members of a worldwide organization that makes sure that cats and dogs stay out of trouble.

A criminal mastermind causes cats and dogs to start fighting again, despite a decades-long truce. It’s up to Roger, Gwen and their friends to figure out who’s doing it and stop them.  There are some other animals in this one, including a parrot (George Lopez), an alligator, a frog, a spider, snakes and more.  It’s a very enjoyable movie.

There is a “behind the scenes” feature on the DVD, a short “deep animal thoughts” feature and a gag reel that really isn’t a gag reel. I was very glad to see that the closed-captioning is available in the extras as well as the movie itself. That isn’t always the case with DVD’s.

You should rent or buy this DVD if you love animals or have children or grandkids.

Cats & Dogs 3: Paws Unite! – the all-new original movie from Warner Bros. Home Entertainment – is NOW available on Digital – and is coming to Blu-ray™ Combo Pack and DVD on October 13! Cats & Dogs 3: Paws Unite! features an all-star comedy lineup lending their voices to this new generation of four footed and two winged friends including Melissa Rauch (“The Big Bang Theory”) as Gwen the cat, Max Greenfield (“The Neighborhood,” “New Girl”) as Roger the dog, and George Lopez as Pablo the Cockatoo. The film is directed by Sean McNamara (Soul Surfer) and written by Scott Bindley (The Last Summer). Producers are Andrew Lazar (Cats & Dogs, Get Smart) and David Fliegel.
If you haven’t seen the trailer yet – you are missing out! But don’t fret my pet – we have you covered:
https://youtu.be/ct5mQYE3Xk4
In honor of our Blu-ray and DVD release we got our paws on some never-before-seen interview clips with Melissa Rauch, Max Greenfield and George Lopez!
You can check them out here:
In this clip, Melissa Rauch (who plays Gwen) reveals that this film is fun and has heart – and how she loves the social commentary about technology – how it can both help and hurt us.
http://castagnolaproductions.com/WB/CAD3PU/EPK/CatsAndDogs3-PawsUnite_EPK_MelissaRauch_OnActing_1080.mp4
http://castagnolaproductions.com/WB/CAD3PU/EPK/CatsAndDogs3-PawsUnite_EPK_MelissaRauch_OnActing_360.mp4
Max Greenfield (who plays Roger) talks about his need to see a photo of the dog before voicing him – in this clip about his character in the film.
http://castagnolaproductions.com/WB/CAD3PU/EPK/CatsAndDogs3-PawsUnite_EPK_MaxGreenfield_OnCharacter_1080.mp4
http://castagnolaproductions.com/WB/CAD3PU/EPK/CatsAndDogs3-PawsUnite_EPK_MaxGreenfield_OnCharacter_360.mp4
George Lopez (who plays Pablo) reminds us to watch Cats & Dogs 3: Paws Unite with our family – including our pets! He reveals that fans will enjoy what they have always loved about the Cats & Dogs movies.
http://castagnolaproductions.com/WB/CAD3PU/EPK/CatsAndDogs3-PawsUnite_EPK_GeorgeLopez_OnFans_1080.mp4
http://castagnolaproductions.com/WB/CAD3PU/EPK/CatsAndDogs3-PawsUnite_EPK_GeorgeLopez_OnFans_360.mp4
We have also included a funny clip from the film – featuring all 3 characters here:
https://youtu.be/losnP8x86cs
In this clip a new threat to F.A.R.T. and the Great Truce is revealed!
About Cats & Dogs 3: Paws Unite!
It’s been 10 years since the creation of the Great Truce, an elaborate joint-species surveillance system designed and monitored by cats and dogs to keep the peace when conflicts arise. But when a tech-savvy villain hacks into wireless networks to use frequencies only heard by cats and dogs, he manipulates them into conflict, and the worldwide battle between cats and dogs is BACK ON. Now, a team of inexperienced and untested agents will have to use their old-school animal instincts to restore order and peace between cats and dogs everywhere! 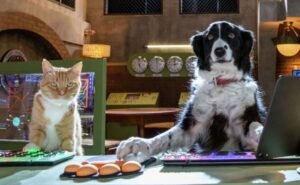