I love this show and always enjoying watching it. They took some interesting chances this season, but they worked. The first episode was an alternate reality (a dream by Diane).  Most of the season is about Diane and company trying to find out what the mysterious “Memo 618” is.

The season was cut short (as it was for most TV shows). Episode 7 was the unintended finale for the season, so they had to add some scenes that were intended for later episodes.  They usually have 10 episodes per season. I don’t think it’s all that noticeable, though. They did a good job with it.  I guess that’s why there are no features. That’s too bad.

Still, it’s a great season of this show and worth buying or renting.  Don’t miss it!

Season four of The Good Fight finds Reddick, Boseman & Lockhart navigating a very different landscape. After they lost their biggest client, Chumhum, and their founding partner’s name was tarnished, Reddick, Boseman & Lockhart was forced to accept an offer by a huge multinational law firm, STR Laurie, to become a small subsidiary. Suddenly, all of their decisions can be second-guessed by the giant firm that is literally on top of them. While STR Laurie initially seem like benevolent overlords, we find Diane Lockhart and her colleagues chafing at their loss of independence while simultaneously investigating the emergence of a mysterious “Memo 618.” 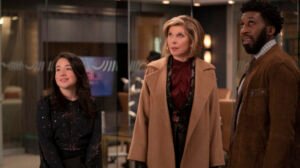