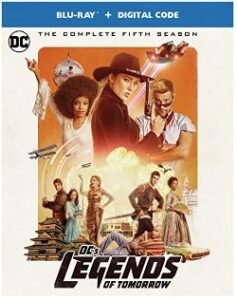 I love this show and never miss an episode. I’ve loved it even more since Constantine (Matt Ryan) joined the cast because I love him and his NBC series that was canceled far too early. This show is constantly changing characters and actors, which I don’t really like. I was sad to see Ray leaving at the end of the season. I hope they bring him back. I didn’t like the new version of Zari or “Charlie” too much, but her brother was a great addition. I wasn’t too happy to see that Nick was in fewer episodes, either. I liked seeing Astra and them pursuing more of Constantine’s history and story.

The stories were good, and fun as usual. I would have liked to have seen them involved in the crossover episodes, though.  I’m really looking forward to next Spring when we have the new season!

If you love this show, you should definitely buy this DVD.  The features are slim, but they do have them.  Many DVD’s and their features have been adversely affected by the coronavirus. At least this show did manage to get all of their episodes filmed. I think they would have had better DVD features if not for the pandemic.

The World’s Most Epic Race Against Time Continues
DC’s Legends of Tomorrow:
The Complete Fifth Season
Time Jump to September 22, 2020 To Own the Blu-Ray™ and DVD
Blu-ray also includes a Limited-Edition Bonus Disc
with All Five Episodes of the DC Crossover Event:
Crisis on Infinite Earths and 6 Crossover Bonus Features!
BURBANK, CA (May 27, 2020) –The fate of the world is in their hands as Warner Bros. Home Entertainment releases DC’s Legends of Tomorrow: The Complete Fifth Season on Blu-ray and DVD on September 22, 2020. Suit up for all 15 captivating one-hour episodes from the fifth season, plus enjoy the epic extra content including a post-production featurette, deleted scenes and a gag reel. A limited-edition bonus disc featuring all five DC Crossover Event Crisis on Infinite Earths episodes will be available exclusively for fans who purchase the Blu-ray. DC’s Legends of Tomorrow: The Complete Fifth Season is priced to own at $24.98 SRP for the DVD ($29.98 in Canada) and $29.98 SRP for the Blu-ray ($39.99 in Canada), which includes a Digital Copy (U.S. Only). DC’s Legends of Tomorrow: The Complete Fifth Season is also available to own on Digital via purchase from digital retailers.
DC’s Legends of Tomorrow follows a group of misfit heroes as they fight, talk, and sing their way through protecting the timeline from aberrations, anomalies, and anything else that threatens to mess with history. After saving the world via the power of song and themed entertainment in last season’s finale, the Legends are major celebrities. Some struggle with the transition from lovable losers to A-list stars, while others start letting fame go to their heads. When a documentary crew decides to film the Legends in action, distracting them from their original mission, Astra Logue frees history’s most notorious villains from Hell in a bid for power. It’s up to the Legends to forgo fame and stop these reanimated souls (who they quickly dub “Encores”) from wreaking havoc on the timeline, whether it’s Rasputin popping out of his coffin and trying to become an immortal tsar or Marie Antoinette (and her head) turning the French Revolution into a deadly, non-stop party.
“After five strong seasons, DC’s Legends of Tomorrow continues to score in ratings and ranks as one of top series for The CW,” said Rosemary Markson, WBHE Senior Vice President, TV Marketing. “Embrace the weird, and get ready to binge on wild plot twists and compassionate storytelling from the unique “Legends,” as well as unbelievable bonus content that will keep you engaged for hours!”
With Blu-ray’s unsurpassed picture and sound, DC’s Legends of Tomorrow: The Complete Fifth Season Blu-ray release will include 1080p Full HD Video with DTS-HD Master Audio for English 5.1.Featuring all 15 episodes from the fifth season in high definition, as well as a digital code of the season (available in the U.S. only).
DC’s Legends of Tomorrow stars Brandon Routh (Arrow, Superman Returns), Caity Lotz (Arrow, Mad Men), Maisie Richardson-Sellers (The Originals), Tala Ashe (The Flash, The Carrie Diaries), Jes Macallan (Mistresses, Shameless), Courtney Ford (Dexter, Supernatural, True Blood), and Olivia Swann (Doctors), with Nick Zano (The Final Destination) and Dominic Purcell (Prison Break, The Flash), with a special appearance by Matt Ryan (Constantine) reprising his popular role as John Constantine. Based on the DC characters, DC’s Legends of Tomorrow is produced by Berlanti Productions in association with Warner Bros. Television, with executive producers Greg Berlanti (Batwoman, The Flash, Supergirl, Blindspot, Black Lightning, Riverdale), Phil Klemmer (Chuck, Political Animals),Keto Shimizu (Arrow), Grainne Godfree (The Flash, Arrow) and Sarah Schechter (Arrow, The Flash, Blindspot, Supergirl, Black Lightning, Riverdale).
SPECIAL FEATURES
*Special Features are subject to change.
BLU-RAY BONUS DISC
15 ONE-HOUR EPISODES
DIGITAL
The fifth season of DC’s Legends of Tomorrow is also currently available to own on Digital. Digital allows consumers to instantly stream and download all episodes to watch anywhere and anytime on their favorite devices. Digital is available from various retailers including iTunes, Amazon Video, PlayStation, Vudu, Xbox and others. A Digital Copy is also included with the purchase of specially marked Blu-ray discs (available in the U.S.) for redemption and cloud storage.
THE BASICS
Street Date: September 22, 2020
Order Due Date: August 18, 2020
BD and DVD Presented in 16×9 widescreen format
Running Time: Feature: Approx. 680 min
Enhanced Content: Approx. 13 min
DVD
Price: $24.98 SRP ($29.98 in Canada)
3 DVD-9s
Audio – English (5.1)
Subtitles – English SDH
BLU-RAY
Price: $29.98 SRP ($39.99 in Canada)
4-Discs (3 BD-50s +1 BD-50 Bonus Disc)
Audio – DTS-HD Master Audio 5.1 – English
BD Subtitles – English SDH
About Warner Bros. Home Entertainment Inc.
Warner Bros. Home Entertainment (WBHE) brings together Warner Bros. Entertainment’s home video, digital distribution and interactive entertainment businesses in order to maximize current and next-generation distribution scenarios. An industry leader since its inception, WBHE oversees the global distribution of content through packaged goods (Blu-ray Disc™ and DVD) and digital media in the form of electronic sell-through and video-on-demand via cable, satellite, online and mobile channels, and is a significant developer and publisher for console and online video game titles worldwide. WBHE distributes its product through third party retail partners and licensees.
About DC
DC is one of the largest English-language publishers of comics and graphic novels in the world and home to some of the most iconic and recognizable characters ever created. As a creative unit of WarnerMedia, DC is charged with strategically integrating its stories and characters across film, television, consumer products, home entertainment, interactive games, and the DC Universe subscription streaming service. For more information, visit dccomics.com.
DC’s Legends of Tomorrow and all related characters and elements are trademarks of and © DC. 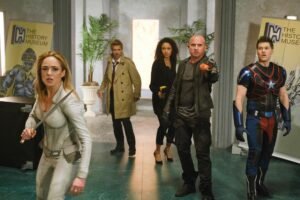