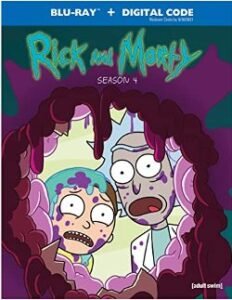 I’ve never liked this show…. it seems aimed at teenage boys.  The artwork is terrible (and frequently gross). It can be creative as far as the stories, but the jokes are not very funny. I tried to watch this, and I think I laughed once.

There are no features or extras on this disk. That’s disappointing. I always enjoy watching the BTS features.

I know the show is very popular, though, so if you’re a fan of the series, this DVD set is a must-have.  The fans are very loyal. They had to wait two years for new episodes of the series.  The show was renewed for season 5. Let’s hope the pandemic doesn’t make these poor souls wait another two years!

Adult Swim’s Out-Of-This-World Series Is Coming To Your Home
Rick and Morty: Season 4
Get it Dawg! The Antics Arrive on Blu-ray™ & DVD
September 22, 2020
BURBANK, CA (July 31, 2020) America’s favorite crazy scientist and his grandson return for more misadventures when the latest season of Adult Swim’s hit series Rick and Morty: Season 4 arrives on Blu-ray and DVD on September 22, 2020. From creators Justin Roiland (“Adventure Time”) and Dan Harmon (“Community”), go on an intergalactic journey across the multi-verse with the award-winning comedy, featuring all 10 episodes from Season 4, and outrageous bonus content including A Day at Rick and Morty: Inside Season 4, Inside the Episode for every episode, Creating Snake Jazz, and more. Rick and Morty: Season 4 is priced to own at $24.98 SRP for the DVD ($29.98 in Canada) and $29.98 SRP for the Blu-ray ($39.99 in Canada), which includes a Digital Copy (U.S. only). Rick and Morty: Season 4is also available to own on Digital via purchase from digital retailers.
Buckle in for disappointment because there’s no way these episodes will be good enough for how long you waited. But maybe they will be? It’s season four! It’s sexy and smooth. Buckle in! Did I already say that? Definitely stay buckled in.
“Rick and Morty remains a ratings leader for Adult Swim and retains an enormously loyal fan base season after season,” said Mary Ellen Thomas, WBHE Senior Vice President, Originals, Animation & Family Marketing. “The award-winning series that has spawned comic books, video games, tabletop games, merchandise, music videos and more brings fans a hilarious fresh slate of exciting adventures this season that is sure to get bring laughter into your homes!”
With Blu-ray’s unsurpassed picture and sound, Rick and Morty: Season 4 Blu-ray release will include 1080p Full HD Video with DTS-HD Master Audio for English 5.1. Featuring all 10 episodes from the fourth season in high definition, as well as a digital code of the season (available in the U.S. only).
DIGITAL
Rick and Morty: Season 4 is available to own on Digital. Digital allows consumers to instantly stream and download all episodes to watch anywhere and anytime on their favorite devices. Digital is available from various retailers including iTunes, Amazon Video, Google Play, Vudu, PlayStation, Xbox and others. A Digital Code is also included in the U.S. with the purchase of specially marked Blu-ray discs for redemption and cloud storage.
BONUS FEATURES
10 (22 Minute) EPISODES
BASICS
Street Date: September 22, 2020
2 DVD 9s / 1 BD-50
Presented in 16×9 widescreen format
Audio – English (5.1)
Subtitles – English SDH
Total Runtime: Approx. 220 minutes
Enhanced Content: Approx. 60 min
DVD Price: $24.98 SRP ($29.98 in Canada)
Blu-ray Price: $29.98 SRP ($39.99 in Canada)
DVD/Blu-ray UPC #: 883929656240 (US)
DVD/Blu-ray Catalog #: 1000729993 (US)
Blu-ray UPC #: 883929726233 (Canada)
Blu-ray Catalog # 1000780956 (Canada)
About Warner Bros. Home Entertainment Inc.
Warner Bros. Home Entertainment (WBHE) brings together Warner Bros. Entertainment’s home video, digital distribution and interactive entertainment businesses in order to maximize current and next-generation distribution scenarios. An industry leader since its inception, WBHE oversees the global distribution of content through packaged goods (Blu-ray Disc™ and DVD) and digital media in the form of electronic sell-through and video-on-demand via cable, satellite, online and mobile channels, and is a significant developer and publisher for console and online video game titles worldwide. WBHE distributes its product through third party retail partners and licensees.
About Adult Swim
Adult Swim (AdultSwim.com), launched in 2001, is a WarnerMedia network offering original and acquired animated and live-action series for young adults.  Airing nightly from 8 p.m. to 6 a.m. (ET/PT), Adult Swim is the #1 network with persons18-24, 18-34 and 18-49 and is seen in 85 million U.S. homes. 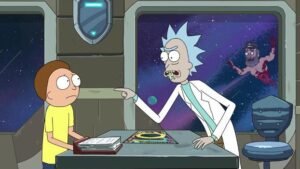