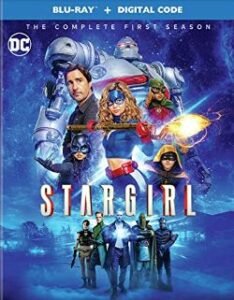 I never miss an episode of this show. It’s a fun teen superhero show. At first, I thought it was interesting but a bit pedestrian, but it got better as the season went along.  This show is definitely aimed at teens more than the other superhero shows. It’s a little more light and fun than those other shows. Which is not to say that the stakes aren’t just as high.

This is the original season, so it was fun to watch them put together the JSA. The only thing I don’t like is that all of their powers seem to come from objects. I guess it was the only way they could find a way to write teenagers with powers. It would be too coincidental if they all just happened to live in the same town.

The first JSA comics were written in the 40’s, so they were probably wise to update them.  Part of me, though would have loved to have seen a JSA series based on the same ones we saw in “DC’s Legends of Tomorrow,” with Patrick J. Adams as Hourman.  I used to read about the JSA when I was a kid. This TV show, “Stargirl” is based on a comic book from the 90’s, which is very different.

If you like superheroes, or you have children who like them, you should buy this DVD.  There are no special features on the DVD, though. Perhaps because of coronavirus…a lot of the DVD’s I’m seeing now are lacking in extras. I read that the versions of the show that aired on The CW are shorter than the ones that aired on DC Universe. You would think that would make for an interesting feature.

There’s a New Hero in Town
DC’S STARGIRL:
THE COMPLETE FIRST SEASON
Contains All Action-Packed Episodes from the First Season of the Hit Original Series on DC UNIVERSE & The CW
The Stars Will Align September 29, 2020
With the Release of the Blu-ray™ & DVD
BURBANK, CA (June 22, 2020) – It’s time for a new generation of justice! Get ready for nonstop action with the release of DC’s Stargirl: The Complete First Season on Blu-ray and DVD on September 29, 2020 from Warner Bros. Home Entertainment. Strap yourself in for an exhilarating ride with all 13 episodes from the first season of the original series on DC UNIVERSE & The CW. DC’s Stargirl: The Complete First Season is priced to own at $24.98 SRP for the DVD and $29.98 SRP for the Blu-ray, which includes a Digital Copy. DC’s Stargirl: The Complete First Season is also available to own on Digital via purchase from digital retailers.
Focusing on the character that started creator Geoff Johns’ career in comic books, when he created her, lovingly inspired by his late sister who was killed in a plane explosion, new DC drama series, DC’s Stargirl follows high school sophomore Courtney Whitmore (Brec Bassinger) as she inspires an unlikely group of young heroes to take up the legacy of a long-lost Super Hero team – The Justice Society of America – and stop the Super-Villains of the past.
“There is nothing like watching a Super Hero suit-up for the first time,” said Rosemary Markson, WBHEG Senior Vice President, TV Marketing. “In only its first season,the critically acclaimed series continues to gain momentum, and we are eager to make this outstanding series available on all formats – Digital, Blu-ray and DVD – for fans and newcomers to enjoy.”
With Blu-ray’s unsurpassed picture and sound, DC’s Stargirl: The Complete First Season Blu-ray release will include 1080p Full HD Video with DTS-HD Master Audio for English 5.1. Featuring all 13 episodes from the first season in high definition, as well as a digital code of the season (available in the U.S. only).
DC’s Stargirl stars Brec Bassinger (Bella & the Bulldogs, All Night), Yvette Monreal (Rambo: Last Blood, Faking It), Anjelika Washington (Tall Girl, Young Sheldon), Cameron Gellman (Heathers, 20th Century Women), Trae Romano (Robbie, 555), Jake Austin Walker (Rectify, Fear the Walking Dead), Hunter Sansone (Safety), Meg DeLacy (The Fosters), Neil Jackson (Absentia) and Christopher James Baker (Agents of S.H.I.E.L.D., Ozark), with Amy Smart (Just Friends, The Butterfly Effect) and Luke Wilson (Old School, Roadies).  Based on the DC characters and created for television by Geoff Johns, DC’s Stargirlis produced by Berlanti Productions and Mad Ghost Productions in association with Warner Bros. Television with Geoff Johns (Titans, Wonder Woman), Greg Berlanti (Batwoman, The Flash, Supergirl), Melissa Carter (Queen Sugar), Greg Beeman (Timeless, Falling Skies) and Sarah Schechter (Riverdale, Blindspot, Katy Keene) serving as executive producers. The series airs Mondays on DC Universe and Tuesdays on The CW at 8 pm ET/PT.
13 ONE-HOUR EPISODES
DIGITAL
DC’s Stargirl: The Complete First Season is currently available to own on Digital. Digital allows consumers to instantly stream and download all episodes to watch anywhere and anytime on their favorite devices. Digital is available from various retailers including iTunes, Amazon Video, Google Play, Vudu, PlayStation, Xbox and others. A Digital Code is also included in the U.S. with the purchase of specially marked Blu-ray discs for redemption and cloud storage.
THE BASICS
Street Date: September 29, 2020
BD and DVD Presented in 16×9 widescreen format
Running Time: Feature: Approx. 572 min
DVD
Price: $24.98 SRP
3-Discs (3 DVD-9s)
Audio – English (5.1)
Subtitles – English SDH
BLU-RAY
Price: $29.98 SRP
3-Discs (3 BD-50s)
Audio – DTS-HD Master Audio 5.1 – English
BD Subtitles – English SDH
About Warner Bros. Home Entertainment Inc.
Warner Bros. Home Entertainment (WBHE) brings together Warner Bros. Entertainment’s home video, digital distribution and interactive entertainment businesses in order to maximize current and next-generation distribution scenarios. An industry leader since its inception, WBHE oversees the global distribution of content through packaged goods (Blu-ray Disc™ and DVD) and digital media in the form of electronic sell-through and video-on-demand via cable, satellite, online and mobile channels, and is a significant developer and publisher for console and online video game titles worldwide. WBHE distributes its product through third party retail partners and licensees.
About DC
DC is one of the largest English-language publishers of comics and graphic novels in the world and home to some of the most iconic and recognizable characters ever created. As a creative unit of WarnerMedia, DC is charged with strategically integrating its stories and characters across film, television, consumer products, home entertainment, interactive games and the DC Universe digital subscription service. For more information visit dccomics.com.
DC’s STARGIRL and all related characters and elements are trademarks of and © DC Comics. 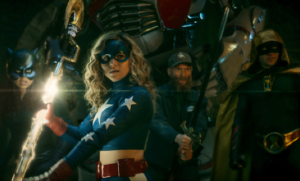