I saw the commercials for this show and I got curious because it is about something that should be put in a drama rather than a comedy. Drew (Thomas Middleditch), a recently divorced dad, finds out from his doctor that he needs a kidney transplant because he is in kidney failure and will die if he doesn’t get one soon. The problem is that he doesn’t have any close family or friends that he can ask to donate a kidney. Drew goes to the wedding of a friend and runs into a high school friend he hasn’t seen in a long time named Gina (Annaleigh Ashford). Gina drinks a lot and does drugs.  While she is drunk at the wedding, Drew tells her he needs a kidney, so she promises to be his kidney donor. The next day, Drew goes to Gina’s place.  Since she was drunk and doing drugs the night before, she doesn’t remember her promise to Drew. Drew decides there must be someone else that he can ask for a kidney donation, but everyone he asks turns him down. Drew calls the donor registry and discovers that there are no matches. Gina has some tests run and tells Drew that the tests say she is a match for him.  Her doctor tells her that she’ll have to give up drugs and alcohol for six months in order to donate a kidney. Gina tells Drew she can give up her bad habits to give him a kidney because she feels this is the reason she survived a bad car accident a few years ago,

The chemistry between the two actors that play Drew and Gina is wonderful and they are complete opposites. She is flaky and a little irresponsible, but with a good heart.  He is serious, responsible, and not at all spontaneous. The audience, however, knows that, eventually, they will probably get together romantically. The rest of the cast that play their friends and family still have to click together, but I am sure that when that happens, this show will be another hit for CBS, who has several quirky comedies in its line-up. I didn’t think I would laugh at a comedy with such a serious subject, but the writers make it funny. I give this show a 5 out of 5 stars.

B POSITIVE is a comedy executive produced by Chuck Lorre and Marco Pennette, starring Thomas Middleditch and Annaleigh Ashford. The series revolves around Drew (Middleditch), a therapist and newly divorced dad who is faced with finding a kidney donor when he runs into Gina (Ashford), a rough-around-the-edges woman from his past who volunteers her own. Together, they form an unlikely and life-affirming friendship, as they begin a journey that will forever impact both of their lives. Kether Donohue stars as Gabby, Gina’s best friend; Sara Rue stars as Julia, Drew’s ex-wife; Izzy G. stars as Maddie, Drew and Julia’s teenage daughter and Terrence Terrell stars as Eli, a new friend of Drew’s who is also going through dialysis. 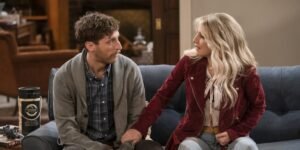