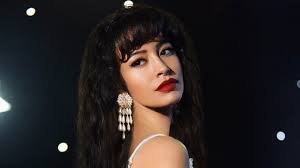 I was interested in watching Selena: The Series because I am a bit of a fan of her music although I will admit I had never heard of her music until my niece brought the movie Selena to my house to watch almost every time I was babysitting her. I began to enjoy her music and knew every line of the movie since I have seen it so many times. The Netflix series shows her road to stardom. The series, in my opinion, does the same thing as the movie showing that Selena and her family struggled and sacrificed to make her a star and that her life was cut tragically short when she was killed by an obsessed fan. I think this series is more for fans of her music to remember her and her music but it doesn’t add anything new that people who saw the movie didn’t know already. If you didn’t see Selena the movie and want to find out more about the singer and her music this is the show for you.

Selena Quintanilla (Christian Serratos) does a good job of playing the Tejana singer who led a sheltered life and whose strict father Abraham Quintanilla (Ricardo Chavira) who was her manager propelled her and her brother AB (Gabriel Chavarria) and sister Suzette (Noemi Gonzalez) to stardom as the band Selena y los Dinos. The show is easy to binge watch, and has good music but I don’t think it will earn Selena any new fans. I almost wish I had not seen Selena the movie because if I had not seen it I would like the series better. I give this series 3 stars and suggest that you watch Selena the movie if you have not seen it yet but if you want to watch this series watch the movie after you have seen the series.

The countdown to Netflix’s Selena: The Series has officially begun.

Fans of late Tejano superstar Selena Quintanilla were up bright and early Tuesday morning for a special announcement from Netflix about its upcoming biography.

The early-morning revelation was that the scripted series, which follows the incredible life and tragic death of the Texas-born performer, will premiere on Netflix December 4, 2020. Netflix also released a handful of new photos and a new teaser trailer.

In the new trailer, Selena, who is portrayed by actress Christian Serratos (TV’s The Walking Dead), walks onto a stage to perform her beloved song “Como la Flor” with a crowd cheering her on.

Selena rose to fame through the 1980s and mid-1990s with hit songs like “Baila Esta Cumbia,” “Como la Flor” and “Bidi Bidi Bom Bom.” Considered the “Queen of Tejano,” she started her crossover to an English-language album when she recorded the pop ballad “Dreaming of You” in early March 1995.

The song would be released posthumously five months later. On March 31, 1995, Selena was murdered at a motel in Corpus Christi by her friend and founder of her fan club. She was only 23 years old.

Along with Serratos and Chavira, the cast of the new series includes actors Gabriel Chavarria (TV’s The Purge) as her brother A.B., Noemi Gonzalez (TV’s East Los High) as her sister Suzette and newcomer Madison Taylor Baez, who plays Selena as a child.

“What I find most enduring about Selena is her ability to defy boundaries,” Serratos wrote on social media earlier this year. “She paved the way for Latinas and inspired so many to continue in the face of adversity. I will be forever grateful for the memories she has given me, and what she’s done for women like me and my daughter.” 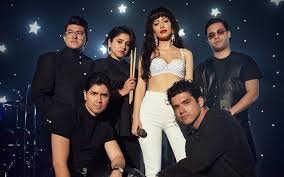