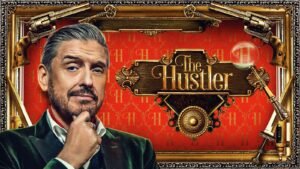 The Hustler is the latest game show on ABC, but it is a bit different than other game shows because it mixes trivia questions with some detective work.

I enjoy watching game shows and I thought this one was interesting and different because it is a mystery mixed with trivia and I had fun trying to figure out who the Hustler was but, as game show fans know, the people watching mist want to play along and secondly they must want a particular contestant to win in order to keep watching the game. I had fun playing along with the game, but I wasn’t rooting for any particular contestant to win the game. I think this is a big problem for this show because I don’t want to keep watching the show. I think I will watch this show and hope that it gets better but I think this is the weakest of the games in the ABC lineup. and I give it 4 out of 5 stars.

NEW CRAIG FERGUSON-HOSTED GAME SHOW, ABC’S ‘THE HUSTLER,’
CHALLENGES VIEWERS TO HONE THEIR DETECTIVE SKILLS
ABC announced today the network has picked up the mind-bending, new game show series, “The Hustler.” Hosted by Emmy® Award-winning game show host, actor, writer, comedian and ABC alum Craig Ferguson, “The Hustler” breaks the game show mold by featuring one player who secretly already knows the answers. Don’t be fooled. Just because they have a leg up doesn’t mean they’ll be taking home the prize. “The Hustler” is set to begin production later this fall, with an airdate to be announced at a later date.
Each episode of “The Hustler” will follow five contestants as they collaborate to answer a series of trivia questions, with the goal of building a collective prize pot that increases with each correct answer. The catch? One of the five contestants, the Hustler, already knows the answers but must keep their identity a secret in order to have a shot at winning the grand prize. Throughout each episode, two contestants are anonymously eliminated by the Hustler, leaving three remaining contestants – the Hustler and two others, who must collectively decide who they think the Hustler is. If they are right, they share the prize pot. If the two contestants are wrong, the Hustler goes home with the full cash reward.
“It’s rare and exciting to have a mystery-based game show that employs viewers and contestants to tap into their sleuth skills,” said Rob Mills, senior vice president, Alternative Series, Specials and Late Night, ABC Entertainment. “This fun, new format is the perfect addition to our dynamic game show lineup, and Craig’s unmatched wit and humor make him the ideal host. We couldn’t be more excited to welcome him back to ABC.”
“Studio Lambert and format creator Richard Bacon are incredibly excited to partner with ABC on ‘The Hustler,’” said Studio Lambert CEO Stephen Lambert. “With Craig in the driver’s seat, the comedic beats of this game are very much to the fore. We think ABC viewers will laugh a lot but also be shocked and surprised by the twists of this game, which invites contestants and viewers to play detective, solving a whodunit or, in this case, a whoisit.”
“The Hustler,” which is produced by All3Media-backed production company Studio Lambert, is an original format created by British TV and radio host Richard Bacon, who serves as an executive producer along with Studio Lambert company founder Stephen Lambert, executive vice president of Studio Lambert USA Jack Burgess, creative director Tim Harcourt and Susan House.

About ABC Entertainment
ABC Entertainment airs compelling programming across all day parts, including “Grey’s Anatomy,” the longest-running medical drama in prime-time television; riveting dramas “The Good Doctor,” “How to Get Away with Murder,” “A Million Little Things” and “Station 19”; the Emmy® Award-winning “Modern Family” and trailblazing comedy favorites “American Housewife,” “black-ish,” “Bless This Mess,” “The Conners,” “The Goldbergs,” and “Schooled”; the popular “Summer Fun & Games” programming block, including “Card Sharks,” “Celebrity Family Feud,” “Holey Moley” and “Press Your Luck”; star-making sensation “American Idol”; reality phenomenon “Shark Tank”; “The Bachelor” franchise; long-running hits “Dancing with the Stars” and “America’s Funniest Home Videos”; “General Hospital,” which has aired for more than 55 years on the network; and late-night talk show “Jimmy Kimmel Live!”; as well as the critically acclaimed hit special ”Live in Front of a Studio Audience: Norman Lear’s ‘All in the Family’ and ‘The Jeffersons.’” The network also boasts some of television’s most prestigious awards shows, including “The Oscars®,” “The CMA Awards” and the “American Music Awards.”
ABC programming can also be viewed on ABC.com, the ABC app and Hulu.

About Studio Lambert
Studio Lambert is a British and American production company producing high quality scripted and unscripted series. It was established in 2008 by Stephen Lambert, creator of many well-known global formats including the CBS Emmy-winning “Undercover Boss” and BAFTA-winning “Wife Swap”, which ran on ABC for many years. Studio Lambert is part of the All3Media group and is currently producing scripted series for the BBC and Amazon and several new unscripted series for UK and US networks, including global phenomenon “The Circle”, soon to launch on Netflix. In two recent UK industry polls, Studio Lambert was ranked No. 1 by its peers.
*COPYRIGHT ©2019 American Broadcasting Companies, Inc. All photography is copyrighted material and is for editorial use only. Images are not to be archived, altered, duplicated, resold, retransmitted or used for any other purposes without written permission of ABC. Images are distributed to the press in order to publicize current programming. Any other usage must be licensed. Photos posted for Web use must be at the low resolution of 72dpi, no larger than 2×3 in size.
— ABC — 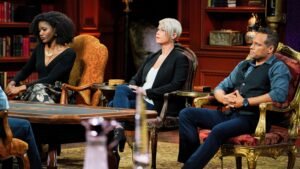