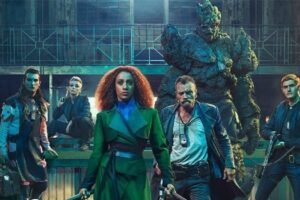 This is a weird scifi show, loosely based on fantasy author Terry Pratchett’s “Discworld” series. I don’t generally like TV series where everything is grimy and disgusting, and where the people are terrible and lawless. However, there is a lot to enjoy about this series, so it’s worth watching for that. If you like scifi/fantasy – especially Dystopian – you should enjoy this. There are elements of steampunk as well.

Richard Dormer plays Sam Vimes, a washed-up police detective, in this fantasy world where humans live alongside dwarves, imps, werewolves, dragons and more. We see most of the action from his POV. The first episode appears to be mostly in flashback as he’s chatting with the devil. I’m not sure if the rest of the show is also in flashback or not. Like I said, it’s a weird show! When Vimes was young, he had been in a gang, and his friend there, Carcer Dun (Samuel Adewunmi), had him infiltrate the police department in order to tear it apart. Instead, Vimes was recruited by the police department and liked it, so Dun shot the police Captain John Keel (Hakeem Kae-Kazim), and then Vimes fought with him. Dun ends up falling from a large height, so everyone assumed he’s dead.

In the present, Vimes is a serious alcoholic. The police (The Watch) don’t chase criminals any more. It’s explained that in order to cut down on all the crime, criminals now have to join a Guild and leave a receipt if they steal something, kill someone, etc. The Watch can only pursue minor crimes, such as missing library books and pets, unless someone commits a crime and isn’t part of a Guild.

We meet all of the members of The Watch, which includes newbie-from-out-of-town Carrot (Adam Hugill); Angua (who looks like a goth but is really a werewolf), played by Marama Corlett; Cheery (Jo Eaton-Kent), a transgender forensics expert; and Sergeant Detritus (Ralph Ineson), who looks a lot like a cross between the Fantastic Four’s Thing and the adult Groot.

Vimes thinks he sees Dun, so he chases after him and finds more mystery (of course) and a strange woman named Lady Sybil Ramkin (Lara Rossi). Meanwhile, Carrot has discovered a dead body that was not killed by a Guild member, so the others have that new mystery to solve.

The acting and writing are very good. There is a lot of plot here, but it’s not too hard to follow unless you’re really not paying attention. The show has a lot of mystery, humor, fantasy, action and more.

New York – October 31, 2018 – On the heels of hit series Killing Eve and the introduction of the first female Doctor on Doctor Who, BBC AMERICA announced today the greenlight of the new original scripted series, The Watch, based on Sir Terry Pratchett’s wildly popular “Discworld” novels, which have sold more than 90 million books worldwide. The (8 x 60) series is produced by BBC Studios for BBC AMERICA. The Watch is distributed by BBC Studios.

The Watch is a punk rock thriller inspired by the legendary ‘City Watch’ subset of “Discworld” novels. This disruptive, character-driven thriller centers on Terry Pratchett’s misfit cops as they fight to save a ramshackle city of normalized wrongness, from both the past and future in a perilous quest. Modern and inclusive, The Watch features many famous “Discworld” creations including City Watch Captain Sam Vimes, the last scion of nobility Lady Sybil Ramkin, the naïve but heroic Carrot, the mysterious Angua and the ingenious non-binary forensics expert Cheery together with Terry Pratchett’s iconic characterization of Death.

The Watch was commissioned for BBC AMERICA by President and GM Sarah Barnett, and Nena Rodrigue, EVP of Original Programming, Acquisitions and Production. Co-produced with Narrativia and written by Simon Allen (The Musketeers, Das Boot and New Tricks), The Watch is executive produced by Hilary Salmon (Luther, Silent Witness and Three Girls), Ben Donald for BBC Studios and Rob Wilkins for Narrativia. Phil Collinson (Doctor Who) also joins the team as executive producer.

“The Watch has been startlingly reimagined for television by writer Simon Allen, while still cleaving to the humor, heart and ingenuity of Terry Pratchett’s incomparably original work,” commented BBC AMERICA President, Sarah Barnett. “BBC AMERICA embraces what’s fresh and exhilarating in TV; we believe The Watch will astonish audiences.”

Writer Simon Allen said: “With events in our own world making the insanity of ‘Discworld’ seem outrageously familiar, there couldn’t be a better time to bring Terry’s fun, fire and fury back to the small screen or a better place than BBC AMERICA. I’m grateful to them, BBC Studios and especially Rob Wilkins at Narrativia who has been a constant source of inspiration on this epic and emotional journey.”

Hilary Salmon, Executive Producer and Head of BBC Studios Drama Production London, said: “The Watch is a distinctly British but defiantly global exhilarating thriller that is disruptive in its approach to the fantasy genre and also big on the themes of mortality, inclusion, alternative facts and justice. It’s a dizzying riot of hope, joy, suspense and audaciously dark humor. We can’t wait to work with BBC AMERICA to bring it all to life for existing fans and brand new audiences.”

Rob Wilkins, Executive Producer and Managing Director of Narrativia, said: “Many years ago Terry made the brave decision to allow brand new Watch stories to be told with his existing characters. It’s taken a long time for anything to happen because we guard these characters with our very lives! So many of Terry’s biggest ideas seem more vital and urgent now than ever before and I am thrilled to be working with Simon and such a talented team, who understand the unique genius of their creator. They have really keyed into the subversive qualities of Terry’s voice and they clearly adore ‘Discworld’ as much as I and millions of fans around the world do.”

BBC Studios produces multi-award-winning dramas loved by audiences around the world, including Doctor Who, Luther and War and Peace. It works with the best established and new drama talent, from writers and directors to on-screen talent, to create original, bold and ambitious British drama. BBC Studios is also making Good Omens, based on the Terry Pratchett and Neil Gaiman novel, co-produced with Narrativia, The Blank Corporation and Amazon.

BBC Studios, a global content company with British creativity at its heart, is a commercial subsidiary of the BBC Group. Formed in April 2018 by the merger of BBC Worldwide and BBC Studios, it spans content financing, development, production, sales, branded services and ancillaries. BBC Studios’ award-winning British programmes are internationally recognised across a broad range of genres and specialisms. It has offices in 22 markets globally, including seven production bases in the UK, and a further nine wholly-owned and production partnerships internationally. The company, which makes 2500 hours of content a year, is a champion for British creativity around the world and a committed partner for the UK’s independent sector. BBC Studios has revenue of £1.4bn, and returns around £200m to the BBC Group annually, complementing the BBC’s licence fee and enhancing programmes for UK audiences.

Simon Allen is the showrunner of The Watch, an irreverent 8 x ’60 remix of Terry Pratchett’s “Discworld” novels for BBC AMERICA. He recently served as a writer/producer on the remake of Das Boot for Sky Atlantic and Sonar Entertainment having been a showrunner on The Musketeers for BBC One. He has worked on multiple high-profile shows including Strike Back for Sky/HBO, Frank Spotnitz’s Hunted for BBC One/HBO, and Spotless for Canal Plus/Netflix.

Terry Pratchett was the acclaimed creator of the global bestselling “Discworld” series, the first of which was published in 1983. With more than 90 million books sold worldwide, translated into 38 languages, Pratchett’s writing has created a literary phenomenon across the globe. His books have been widely adapted for stage and screen, and he was the winner of multiple prizes and accolades, including the Carnegie Medal, and the award of a Knighthood for services to literature. He died in March 2015.

Narrativia is an independent production company, launched in 2012 by Sir Terry Pratchett. The company owns and controls the exclusive multimedia and merchandising rights to all of Sir Terry’s works, including his “Discworld” characters and creations. The company is headed by Managing Director Rob Wilkins and celebrated writer Rhianna Pratchett. 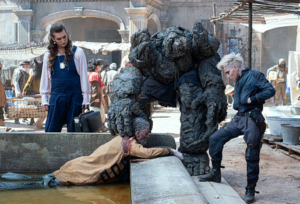