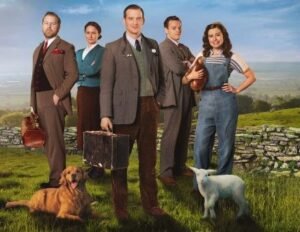 This is your typical “Masterpiece” show, set in the past (the 1930s), with an intriguing story and good actors. It’s based on a series of autobiographical books written by James Herriot (the main character), a real-life vet. There was a “All Creatures Great and Small” film in 1975, and a successful series in 1978. The first book was first published in 1970 (50 years ago last week) , so they showed it in the UK last year for that anniversary. PBS is celebrating Masterpiece’s 50 anniversary this year, so that’s why we’re seeing this now.

James Herriot (Nicholas Ralph) leaves Scotland for Yorkshire, England to interview for a job with a vet, Mr. Farnon (Samuel West). Herriot is young and green, and Farnon is an older man who seems gruff at first. Herriot has to prove himself and then experiences both the life as a vet and as a newcomer to Yorkshire. Diana Rigg plays Mrs. Pumphrey (her last performance). You’ll probably recognize other familiar faces as well.

The countryside scenery is beautiful, the actors do a fabulous job, and the story is intriguing. It’s not an epic series. It’s a nice little throwback to a simpler time. Viewers loved the one in the 70’s, so they’ll probably love this one, too. You should check it out because it’s enjoyable.

MASTERPIECE: ALL CREATURES GREAT AND SMALL

James Herriot’s adventures as a veterinarian in 1930’s Yorkshire get a glorious new adaptation in a seven-part series based on his beloved stories. Exciting newcomer Nicholas Ralph will make his television debut as the iconic vet who became renowned for his inspiring humor, compassion and love of life. The 1970s adaptation, which aired on public broadcasting, was a favorite of millions of viewers.
James Herriot’s first day as a Yorkshire veterinarian is full of surprises.

Winner of 83 Primetime Emmys® and 16 Peabody Awards, MASTERPIECE has been essential Sunday night viewing for millions of fans since 1971 and is known for recent hits such as Sherlock, Downton Abbey and Victoria, and beloved classics such as Upstairs Downstairs, Prime Suspect, The Forsyte Saga and Poldark. 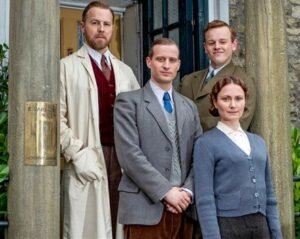