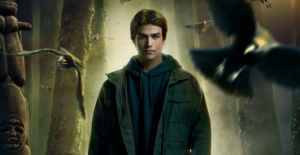 I watched the first episode of this supernatural thriller..it moves a bit slowly at first. It’s creepy, but interesting. Even though it was a bit slow, I never felt bored.  The episode opened with a great action/fantasy scene, and then it comes back to the present when Jared (Joel Oulette), the main character, is a teenager. He makes drugs and sells them at school or to others.  His mother, Maggie (Crystle Lightning) appears to be a crazy party girl, but we know from the opening scene that she’s much more than that.  His parents are divorced, and his father, Phil (Craig Lauzon), isn’t much better than the mother.  Jared’s grades are slipping, too. He clearly hates his life and wants to leave town. What makes this series unique (especially to those of us in the U.S.) is that most of the characters are Haisla, a tribe of indigenous people in British Columbia.

This Canadian show is based on a series of books by Eden Robinson. The first one is “Son of a Trickster.” Jared starts seeing weird things that he can’t explain.  As the episode goes along, he sees more and more. Things escalate. I have to admit that I was disappointed when it ended because I wanted to see what was going on. It has me hooked, and I’ll definitely be watching more.  There was only one thing that I really didn’t like, and that was that a dog was killed. I wish TV series and movies would stop showing this type of thing. It ruins the show for me. Normally I would stop watching the show based on that alone, but I want to see more. I’ll be giving it more chances to make me love the show rather than just liking it.

The CW’s new drama TRICKSTER, based on the bestselling trilogy of novels by Eden Robinson, tells the story of the Indigenous Gothic, spirits, ancient magic, deadly rites of passage in a coming of age story unlike any you’ve ever seen.

Jared (Joel Oulette) is an Indigenous teen struggling to keep his dysfunctional family above water. Jared holds down an after-school job and cooks ecstasy on the side to support his separated parents: partying mom Maggie (Crystle Lightning), who self-medicates an undiagnosed mental illness, and unemployable dad Phil (Craig Lauzon), who has a painkiller addiction and a new girlfriend. But when Jared starts seeing strange things – talking ravens, doppelgängers, skin monsters – his already chaotic life is turned upside down. At first, he thinks he’s losing his mind, but to his relief, and terror, the supernatural events surrounding him are all too real.  There is more than meets the eye to the place Jared grew up, the people he loves – and to Jared himself.

Rounding out the TRICKSTER cast are Kalani Queypo as Wade, Anna Lambe as Sarah, Nathan Alexis as Crashpad, Joel Thomas Hynes as Richie, Gail Maurice as Georgina and as Georgina Lightning as Sophia.

CREDITS FOR “SHOW TITLE” ON THE CW 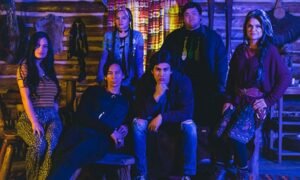