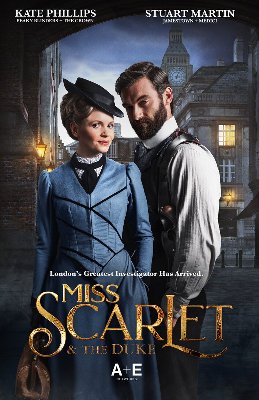 This is a fun new mystery miniseries Sundays on PBS. I’m really enjoying it. It takes place in London, in Victorian England. Miss Eliza Scarlet (Kate Philips) is the daughter of a private detective (and former police officer). She wants to be a private detective, too. He trained her for many years as she was growing up. Her father goes missing and she has to handle a new client, and dealing with what happens to her father, among other things. Although she’s “a lady,” she’s not afraid and can defend herself. Her childhood friend is William Wellington, a police officer known as “The Duke” (Stuart Martin). Like most men of his time, he’s very chauvinistic. He doesn’t think young ladies should be involved in dead bodies and gruesome things like that. However, she’s a very good detective, so they work together.

I love most PBS mysteries, and especially ones that feature powerful women, and handsome men. Kate Philips is excellent in the role. She has just enough moxie to pull off the character while still seeming like someone who was raised in a genteel fashion. Stuart Martin reminds me a lot of Hugh Jackman. They make a great team. Eliza also has some household servants who are more like family, and there are other various characters (some unsavory). The ending of the first episode reminds me a little bit of “Remington Steele.”  Check this out.

Go on the case with private eye Eliza Scarlet, Victorian England’s first-ever female sleuth, as she solves crimes – and sometimes flirts – with her partner and childhood friend, Detective Inspector William “The Duke” Wellington.

Miss Scarlet in the parlor with the dead man

Lighthearted yet gripping, the series features Kevin Doyle (Downton Abbey) as Eliza’s father, Henry Scarlet, who is also her mentor in crime-solving.

Miss Scarlet & The Duke is set in London at the start of the Sherlock Holmes era, circa 1880. Eliza’s father, Henry, is a widowed retired police officer, currently a private detective running up bills and drinking through his occasional earnings. Nonetheless, he is a talented investigator, and he has taught his only child, Eliza, the trade since she was a girl. She is now determined to break into this male-only profession.

Fortunately, Eliza’s childhood friend happens to be a detective inspector at Scotland Yard: William “The Duke” Wellington. He gets his nickname from the most famous Englishman of the 19th century: the Duke of Wellington, victor over Napoleon at the Battle of Waterloo. Like that other Wellington, the Duke is cool and decisive in a scrape. And he is also a ladies’ man, which leads to interesting complications with Eliza.

Sometimes working together—but often at odds—Eliza and the Duke tackle a series of fascinating cases. On launching her business, Eliza’s initial chal- lenge is not criminals or clients so much as getting society to take a female detective seriously, even one who has mastered wounds, poisons, motives, and red herrings. But she forges ahead and sees her first commission—a simple search for an older gentleman’s lost niece—turn into something very sinister, which she resolves with the Duke’s help.

And with that her career, if not her income, is off and running. Eliza’s exploits range from an open-and-shut murder case that only she realizes is not so clear-cut, to a dastardly plot that will make history if it succeeds, to a client being harassed from beyond the grave. In her final investigation of the season, spanning Episodes 5 and 6, Eliza is pursuing the mystery of her father’s demise when she unwittingly lures the Duke into a deathtrap. Naturally, the ordeal is a bonding experience for the two quarrelsome but secretly affectionate crime-solvers.

Produced for PBS by GBH Boston, MASTERPIECE is known for recent hits such as Sherlock, Downton Abbey and Victoria, and beloved classics such as Upstairs Downstairs, Prime Suspect, The Forsyte Saga and Poldark.

FUNDING FOR MASTERPIECE PROVIDED BY 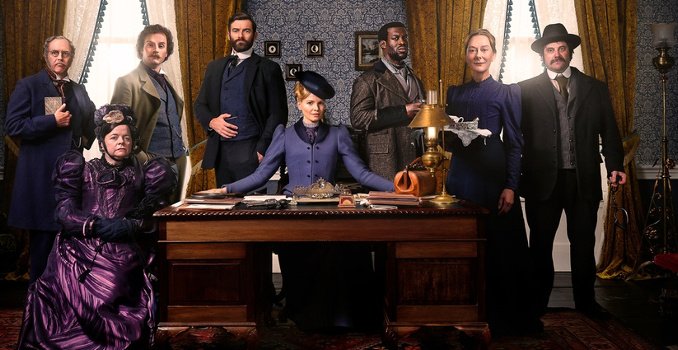