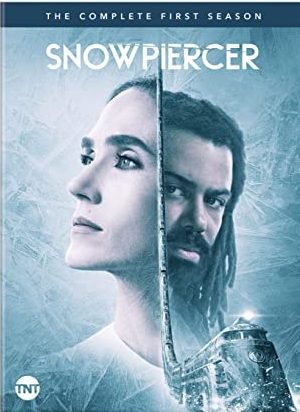 In case you didn’t know, this is the TV version of the 2013 movie “Snowpiercer” starring Chris Evans (which was adapted from a book). It takes place in the future, after mankind, in trying to fix climate change, froze the earth. The rich people got together and built a massive train just for them and their families. However, many regular people forced their way on board with them before the train started up.  Now the people at the back of the train (the Tailies) are poor and starving, while the rich people live in the rest of the train, sectioned off from the rest.  The Tailies want to rebel and overtake the rest of the train, but the rich people try to keep the ecological balance of their part of the train and enforce their privacy with a security force.  They occasionally bring Tailies into the front part to work as maintenance, security and other menial tasks.

I never saw the original “Snowpiercer” movie, so I can’t compare the TNT series to that. I was reluctant to watch either because I had read what they were about, and I’m not a big fan of post-apocalyptic or dystopian movies/shows. They’re usually lacking in hope; everything is dark, dirty and depressing.  I love scifi, but I was raised on “Star Trek,” where everything is clean and hopeful.

However, they sent me the DVD to review, so I had to watch it. It’s not bad.  Things are bad for humanity in this show, but they’re not hopeless. There is a lot of violence, but they do have some nice moments to balance it a bit. It is a very intense show that keeps you watching.

It’s compelling drama as long as you ignore how ridiculous parts of it are. I don’t know about the movie, but it seems to me that without the Tailies, the rich people wouldn’t have anyone to do the manual labor (unless they already had brought on their favorite nannies and other staff). How do you build a track or train that long, and what happens if part of the tracks deteriorate or freeze over? What happens if other things go wrong mechanically on the train. I’m sure that in real life, they have maintenance crews to fix things. It doesn’t make a lot of sense as to why they would build a train to just go around and around on the ice planet, especially when they could have built a city instead, or a spaceship. Why a moving train at all? No one appears to have guns, so either they were outlawed or the rich people didn’t think they would need them, I guess. If they weren’t expecting people to jump on the train, then how do the security guards have all these fancy uniforms?

The show’s two main stars are Daveed Diggs of “Hamilton” fame (Andre Layton) and movie star Jennifer Connelly (Melanie Cavill).  You’ll no doubt recognize other familiar faces in the show, such as Mike O’Malley (“Glee,” “Yes, Dear”), Alison Wright (“Castle Rock”) or Sheila Vand (“Undone”).  Sean Bean joins the show in the 2nd season. Lyaton is the show’s hero from the Tail. He’s brought up to the front of the train to solve a murder because he was a former police detective in Detroit.  He’s forced to help the rich people, even though he doesn’t want to.  Connelly is the heroine (of sorts) who helps run the train and keep the status quo.  She and Diggs have a lot of chemistry.

The movie is, of course, about class warfare. It’s made even clearer by the fact that the rich people are all white or Asian, and the tailies tend to have more black people.  The tailies live in the dark, with no windows, and no creature comforts (I gather they’re back with the luggage? I wonder what happened to all the rich people’s luggage?). Everything looks dirty and raggedy.  The front part of the train is very clean, white and beautiful. They seem to have everything one could want. The show is set 7 years after the train started, and I believe the movie was set later than that. I supposed that makes it a prequel.

There are only 10 episodes, so there are only two disks. There are many bonus features, including an Overview of the show; a segment called Class Warfare; a behind-the-scenes interview with the two main stars; a feature about the train itself; and a segment called “Behind the Curtain: Art of the Frozen World” which focuses the Hollywood magic they use to make the cold parts of the show.  It’s a good show to binge-watch, along with the extras.

FOR IMMEDIATE RELEASE
The World Outside Is Frozen Solid. The World Inside Is Heating Up.
SNOWPIERCER:
THE COMPLETE FIRST SEASON
All Aboard The World’s Most Elite Train On January 26, 2021
When the Blu-ray™ & DVD Become Available!
BURBANK, CA (October 20, 2020) Attention all passengers – the revolution is coming! Get ready for more secrets, plot twists, and reveals as Warner Bros Home Entertainment takes you on an epic journey with the release of “Snowpiercer: The Complete First Season” on Blu-ray and DVD on January 26, 2021. Strap yourself in for an exhilarating ride with all 10 episodes from the first season, plus enjoy the captivating extra features, behind-the-scenes interviews, featurettes, and more! “Snowpiercer: The Complete First Season” is priced to own at $24.98 SRP for the DVD and $29.98 SRP for the Blu-ray, which includes a Digital Copy. Both sets have an order due date of December 22, 2020. “Snowpiercer: The Complete First Season” is also available to own on Digital via purchase from digital retailers.
Set more than seven years after the world has become a frozen wasteland, “Snowpiercer”centers on the remnants of humanity who inhabit a perpetually moving train, with 1001 cars, that circles the globe. Class warfare, social injustice and the politics of survival play out in this riveting television adaptation.
“In only its first season this insanely brilliant series, with incredible actors takes us through the ultimate journey of what could potentially be the aftermath of global warming,” said Mary Ellen Thomas, WBHE Senior Vice President, Originals, Animation & Family Marketing. “Get ready for the ride of a lifetime as you binge watch the entire first season on Digital, Blu-ray & DVD!”
Based on the critically acclaimed graphic novel series and the film from Academy Award® winner Bong Joon Ho (“Parasite”), the all-new series stars Academy Awardwinner Jennifer Connelly (“A Beautiful Mind”),  Grammy® and Tony Award® winner Daveed Diggs (“Hamilton,” “Black-ish”) Emmy® nominee Alison Wright (“The Americans”), Mickey Sumner (“Frances Ha,” “Battle of the Sexes”), Susan Park (“Ghostbusters”), Iddo Goldberg (“Peaky Blinders,” “The Zookeeper’s Wife”), Katie McGuinness (“Dirty Filthy Love”), Tony Award winner and Grammy nominee Lena Hall (“Hedwig and the Angry Inch”), Annalise Basso (“Bedtime Stories”), Sam Otto (“Jellyfish”), Roberto Urbina (“Narcos”), Sheila Vand (“Argo”) and Jaylin Fletcher (“Saturday Church”).
The series is executive produced by Graeme Manson, Marty Adelstein and Becky Clements, James Hawes, Matthew O’Connor, Ben Rosenblatt and Scott Derrickson, and the original film’s producers, including Bong Joon Ho, Miky Lee, Tae-sung Jeong, Park Chan-wook, Lee Tae-hun and Dooho Choi. The show is produced by Tomorrow Studios (a joint venture between Adelstein and ITV Studios), along with CJ Entertainment. ITV Studios handles international distribution.  Cable’s #1 new drama series, “Snowpiercer” season two will premiere Monday, January 25 at 9 p.m. ET/PT on TNT.
SPECIAL FEATURES
10 ONE-HOUR EPISODES
DIGITAL
The first season of Snowpiercer is also available to own on Digital. Digital allows consumers to instantly stream and download all episodes to watch anywhere and anytime on their favorite devices. Digital is available from various retailers including Apple TV, Amazon Video, Google Play, Vudu, PlayStation, Xbox and others. A Digital Copy is also included in the U.S. with the purchase of specially marked Blu-ray discs for redemption and cloud storage.
BASICS
Street Date: January 26, 2021
Order Due Date: December 22, 2020
BD and DVD Presented in 16×9 widescreen format
Running Time: Feature: Approx 440 min
Enhanced Content: Approx 20 min
DVD
Price: $24.98 SRP
3-Discs (3 DVD-9s)
Audio – English (5.1)
Subtitles – English SDH
UPC# 883929723768
Catalog# 1000778531
BLU-RAY
Price: $29.98 SRP
2-Discs (2 BD-50s)
Audio – DTS-HD Master Audio 5.1 – English
BD Subtitles – English SDH
UPC# 883929723775
Catalog# 1000778532
About Warner Bros. Home Entertainment Inc.
Warner Bros. Home Entertainment (WBHE) brings together Warner Bros. Entertainment’s home video, digital distribution and interactive entertainment businesses in order to maximize current and next-generation distribution scenarios. An industry leader since its inception, WBHE oversees the global distribution of content through packaged goods (Blu-ray Disc™ and DVD) and digital media in the form of electronic sell-through and video-on-demand via cable, satellite, online and mobile channels, and is a significant developer and publisher for console and online video game titles worldwide. WBHE distributes its product through third party retail partners and licensees.
About TNT
TNT, a WarnerMedia brand, is watched by more people than any other cable network and known for big, lean-forward television that gives viewers the best seat in the house for electrifying stories, dynamic characters and thrilling events. TNT is home to some of television’s most popular original series including ”Snowpiercer,” ”The Alienist: The Angel of Darkness,” “Animal Kingdom” and ”Claws.” TNT is expanding its programming to include premium unscripted with the docuseries ”ShaqLife.” TNT also presents popular shows such as ”Bones” and ”Castle,” in addition to primetime specials and sports coverage, including the NBA and NCAA Division I Men’s Basketball Championships and the professional wrestling league All Elite Wrestling (AEW), which has exploded onto the scene with “AEW Dynamite,” premiering as the night’s #1 wrestling show. Website: www.tntdrama.com 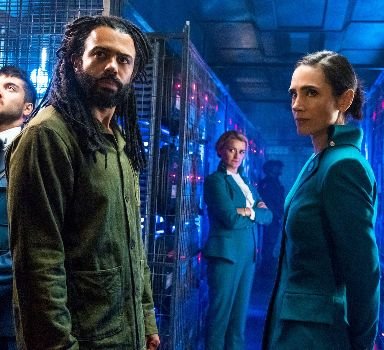