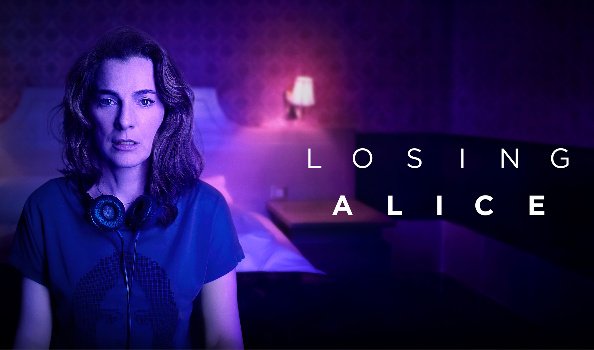 This is a very strange Israeli show. After viewing the first episode, I’m still not sure what’s really going on. That may be on purpose. They want to keep you guessing. I find it very hard to follow. In this psychological thriller, Alice (Ayelet Zure) is an older female film director/writer who has writer’s block and is feeling insecure. She meets a strange young woman, Sophie (Lihi Kornowski) on a train who seems to worship her. The young woman acts very odd and somewhat sexual. The older woman is clearly affected by her. She finds out that Sophie had submitted a script to her husband, David, and he liked it. Later, Alice goes home and has some unsettling encounters with her neighbors, who are remodeling their home.  She also talks to her husband about Sophie and reads Sophie’s script. She finds the script to be amazing.  We see part of the “movie” in the script, but I don’t know if it’s real or not.

If you love thrillers and aren’t bothered by movies that are very unusual and don’t follow a regular plot, then you’ll probably love this one. I don’t like to have to work this hard when I watch TV. I like to sit back, relax, and be entertained. Skip this one if you’re like me.

“Losing Alice” is a thrilling cinematic journey that uses flashbacks and flash-forwards in a satisfyingly complex narrative that takes the viewer through the conscious and subconscious of its protagonist’s mind. The series follows Alice (played by Ayelet Zurer), a 48-year-old female film director, who feels irrelevant since raising her family. After a brief encounter on the train, she becomes obsessed with a 24-year-old screenwriter femme fatale, Sophie (played by Lihi Kornowski), and eventually surrenders her moral integrity in order to achieve power, relevance and success. Through the prism of this female Faust, the series explores issues such as jealousy, guilt, fear of aging, and the complex relationships women have among themselves and each other. But above all, “Losing Alice” is a love letter for the still-too-rare female director.