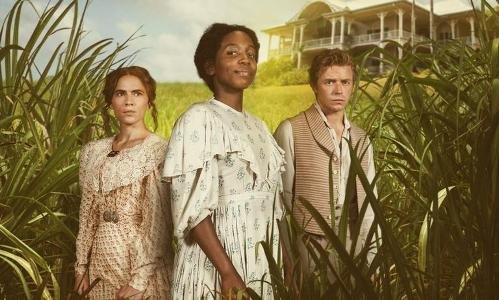 This is a brilliant historical miniseries from PBS. It’s a little bit hard to watch at times because of the realistic depiction of slavery. July (Tamara Lawrance) is a slave in 1800’s Jamaica. She becomes the house maid for a spoiled white woman (Hayley Atwell) and her brother. The Christmas Rebellion, a slave uprising, causes problems for everyone. Then the king declares that slavery will be over soon, and a new young man comes to the plantation to improve conditions.

This is very well done, with lots of great music and drama. Although the slaves speak with heavy accents, it’s easy enough to understand them without the closed-captioning. It’s a bit heartbreaking, but you have to admire July’s spirit in the face of great odds. Although she suffers greatly, she perseveres and eventually finds some love, family and freedom. Don’t look for a completely happy ending, though, because this is not a particularly happy period in history.

A tale of hope and endurance based on the bestselling novel by Andrea Levyon MASTERPIECE Sundays, January 31 – February 14, 2021 on PBS. Tamara Lawrance (King Charles III) stars as an indomitable house slave in Jamaica during the era of emancipation, with Hayley Atwell (The Avengers) as her demanding, capricious mistress, in The Long Song. Based on the award-winning novel by Andrea Levy, the miniseries airs in three parts on MASTERPIECE, Sundays, January 31 – February 14, 2021 at 10/9c on PBS.

The British press applauded the UK broadcast of The Long Song, with The Guardian calling it “a beautiful, moving, horrifying adaptation of Levy’s unsimple tale, that honors the source and its subject.” The Radio Times judged it “so finely-tuned and carefully-balanced that it’ll break your heart—and make you laugh at the same time.” And The Times opined, “What can a period slavery drama tell us that we don’t already know? Quite a bit.”Scripted by Sarah Williams (Flesh and Blood), who previously adapted Levy’s International Emmy® Award–winning Small Island for MASTERPIECE, The Long Song also stars Jack Lowden (Mary Queen of Scots), Sharon Duncan-Brewster (Rogue One), Jordan Bolger (Peaky Blinders), Ayesha Antoine (Doctor Who), Gordon Brown (Only God Forgives), Leo Bill (The Living and the Dead), Madeleine Mantock (Into the Badlands), and the acclaimed comic, actor, and activist Sir Lenny Henry (Broadchurch). Andrea Levy, who died in 2019, was born in London to Jamaican parents and spent her writing career probing her heritage. Her numerous literary awards included the Walter Scott Prize for The Long Song (published in 2010), which was also a finalist for the English language’s most prestigious book award: the Man Booker Prize.The Long Song is framed by the reminiscences of July (played as a young woman by Lawrance), who grew up as a slave on a sugar plantation in Jamaica and is now looking back on her life. In extended flashbacks, she recounts her tumultuous story, which has been shaped by villains, heroes, and well-meaning people who are an unsettled mix of the two.

FUNDING FOR MASTERPIECE PROVIDED BYFirst there are July’s parents: Her mother, Kitty (Duncan-Brewster), is a stoic field slave. Her father is the brutal Scottish overseer of the plantation, Tam Dewar (Brown), who regularly rapes Kitty.As a young girl, July is callously taken from her mother at the whim of Caroline (Atwell), the sister of the plantation owner, John Howarth (Bill). Caroline wants July for a lady’s maid and bestows on her a more genteel name, Marguerite. July grows up catering to Caroline’s impulses, surrounded by other slaves, including the canny Godfrey (Henry), the spiteful Molly (Antoine), and the haughty Clara (Mantock). There is also the debonaire Nimrod (Bolger), who has bought his freedom and fancies July, promising her a fairy-tale life with him.A moment of truth arrives with the Christmas Rebellion of 1831, a slave uprising that heralds the end of official slavery in Jamaica and other English colonies—but at a great cost in lives, including some who are near and dear to July. In the aftermath, a handsome new overseer, Robert Goodwin (Lowden), rides into the story. He will set hearts aflutter, establish an enlightened tone with the emancipated slaves, and play a tragic role in the fates of all.The Long Song is a Heyday Television Production for BBC. It is based on the novel by Andrea Levy. The Executive Producers are David Heyman, Rosie Alison, Andrea Levy, Sarah Williams, and Tom Coan. Ben Irving is the Executive Producer for the BBC. The Producer is Roopesh Parekh. The writer is Sarah Williams. The Director is Mahalia Belo.

About MASTERPIECE Winner of 83 Primetime Emmys® and 18 Peabody Awards, MASTERPIECE has been essential Sunday night viewing for millions of fans since 1971. Susanne Simpson is the executive producer and Rebecca Eaton is the executive producer-at-large for the series. Funding for MASTERPIECE is provided by Viking and Raymond James with additional support from public television viewers and contributors to The MASTERPIECE Trust. Produced for PBS by GBH Boston, MASTERPIECE is known for recent hits such as Sherlock, Downton Abbey and Victoria, and beloved classics such as Upstairs Downstairs, Prime Suspect, The Forsythe Saga and Poldark. 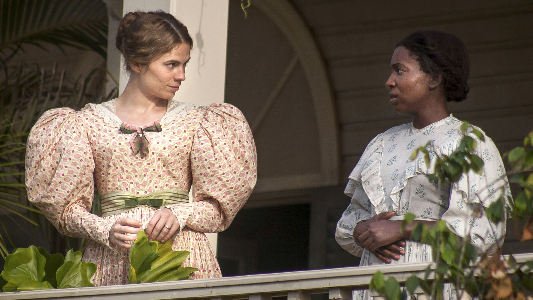