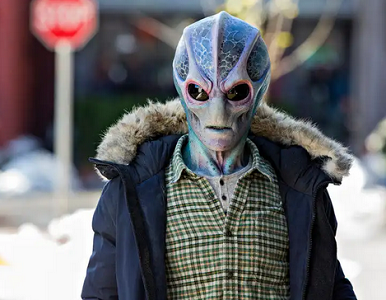 I love this show. Syfy let me see the first 7 episodes because I recently interviewed the star of the show, Alan Tudyk. The first episode is good, but it gets better and better. There were many times I laughed out loud. The story is great, and it has many wonderful characters.

Alan Tudyk (Firefly, Doom Patrol) stars as an alien that crash-lands in the small, snowy town of Patience, Colorado. He finds this doctor in a nearby cabin and kills him, then takes his identity. His mission was to drop a small device that will kill everyone, but he ends up crashing instead. He then has to try to find his spaceship and the pieces of the device, out in the snowy wilderness.

However, the town doctor is found dead, so the alien, now posing as Harry, the doctor, takes over his office temporarily. It’s fun to watch Harry learn how to be human. We also hear his voice-over, which is very funny. There are many characters, but the writing is so good that you don’t get any confusion about who they all are. Harry makes friends with the doctor’s nurse, Asta (Sara Tomko), and her friend D’arcy (Alice Wetterlund), the town bartender. There is also a funny town sheriff, Mike (Corey Reynolds), his deputy Liv (Elizabeth Bowen), the mayor (Levi Fiehler), the mayor’s son, Max (Judah Prehn), and more. Max is the only one in town that can see the alien as he really is.

You’ll notice that the show will remind you of other scifi shows, like “Mork & Mindy,” “Starman,” “Alien Nation” and more. We’ve really never seen a scifi comedy like this one, however. Not only is it a comedy/drama/scifi show, but it’s also a mystery. For each episode, they really leave you wanting more. As the episodes progress, we see that Harry is not alone here and that there are some people who know he’s here (and are not friendly). Linda Hamilton (“The Terminator”) plays a general that’s hunting for the alien.

Asta and her family are native Americans, and it’s great that they showcase them because that’s rare on American TV. Canadian TV shows seem to show them much more often than we do on this side of the border.

If you’re a fan of scifi or comedy, you won’t want to miss this one.

Based on the Dark Horse comic, SYFY’s RESIDENT ALIEN follows Harry, an alien played by Alan Tudyk (“Rogue One,” “Firefly”) that crash lands on Earth and passes himself off as a small-town human doctor. Arriving with a secret mission to kill all humans, Harry starts off living a simple life… but things get a bit rocky when he’s roped into solving a local murder and realizes he needs to assimilate into his new world. As he does so, he begins to wrestle with the moral dilemma of his mission and asking the big life questions like: “Are human beings worth saving?” and “Why do they fold their pizza before eating it?”

RESIDENT ALIEN is a twisted and comedic fish-out-of-water story that follows a crash-landed alien named Harry (Alan Tudyk) who, after taking on the identity of a small-town Colorado doctor, slowly begins to wrestle with the moral dilemma of his secret mission on Earth — ultimately asking the question, “Are human beings worth saving?”

Tudyk (“Doom Patrol,” “Rogue One”) is joined by series regulars Sara Tomko (“Once Upon A Time”), Corey Reynolds (“The Closer”), Alice Wetterlund (“People of Earth”) and Levi Fiehler (“Mars”). The series will begin production in Vancouver this summer.

About SYFY
SYFY is a global, multiplatform media brand that gives science fiction fans of all kinds a universe to call home. Celebrating the genre in all its forms, SYFY super-serves passionate fans with original science fiction, fantasy, paranormal and superhero programming, live event coverage and imaginative digital and social content. The brand is powered by SYFY WIRE (www.syfy.com), the premier portal for breaking genre news, insight and commentary. SYFY is a network of NBCUniversal, one of the world’s leading media and entertainment companies. NBCUniversal is a subsidiary of Comcast Corporation.

About UCP
UCP is a premium content studio that operates with a highly curated indie sensibility, while simultaneously leveraging the power and scale of NBCUniversal. As fierce advocates for creators with an eclectic point of view, the UCP team develops pioneering original programming with partners such as Amazon (“Homecoming”), Netflix (“The Umbrella Academy”), Hulu (“The Act”) and YouTube (“Impulse”). In addition, UCP produces high-caliber content for NBCU Cable networks, including Bravo (“Dirty John”), USA (the Emmy® and Golden Globe®-winning drama “Mr. Robot,” the Golden Globe nominated “The Sinner,” “The Purge” and “Suits” ) and SYFY (“Happy!,” and “The Magicians”). UCP’s content library also features 800 hours of award-winning and critically-acclaimed content, including the Emmy Award-winning “Monk,” the Peabody and Hugo Award-winning “Battlestar Galactica” and the Emmy nominated “Psych.”

About Amblin Television:
Amblin Television, a long-time leader in quality programming, is a division of Amblin Partners, a content creation company led by Steven Spielberg. Amblin Television’s co-presidents, Darryl Frank and Justin Falvey, oversee all development, production and programming for the company. Amblin Television currently has thirteen projects in various stages of production including “Bull” and “Tommy” for CBS, “Roswell, New Mexico” for the CW, “The Haunting of Bly Manor” for Netflix – the follow-up chapter to The Haunting of Hill House, “Amazing Stories” for Apple, “Halo” for Showtime, a straight-to-series order for “Brave New World” from USA Network, “Cortes and Moctezuma” for Amazon, “Animaniacs” for Hulu, “Why We Hate” for Discovery, “Resident Alien” for SYFY, and the documentary films “Natalie Wood: What Remains Behind” for HBO and “Laurel Canyon” for Epix.

Some of Amblin Television’s previous credits include the Emmy and Golden Globe Award-winning drama “The Americans” for FX, Emmy-nominated HBO movie “All The Way” starring Bryan Cranston, “Smash” for NBC, “Under the Dome” for CBS, “Falling Skies” for TNT, “The Borgias” and “The United States of Tara” for Showtime, and “Las Vegas” for NBC.

About Dark Horse Entertainment:
Dark Horse Entertainment was spun off from founder Mike Richardson’s Dark Horse Comics in 1992. The company’s first major hits—THE MASK and TIMECOP — were based on Richardson’s creations and DHE has since produced over 30 films and series, including an Emmy Award–winning documentary, MR. WARMTH: THE DON RICKLES PROJECT. Recent projects include THE LEGEND OF TARZAN with Warner Bros., the DARK MATTER television series for Syfy network and POLAR, adapted from Victor Santo’s noir graphic novel starring Mads Mikkelsen (Rogue One) at Netflix. Current projects include a reboot of Mike Mignola’s HELLBOY starring David Harbour (Stranger Things) directed by Neil Marshall (The Descent), and THE UMBRELLA ACADEMY, a Netflix original series based on the comics created by Gerard Way (My Chemical Romance) and Gabriel Ba. 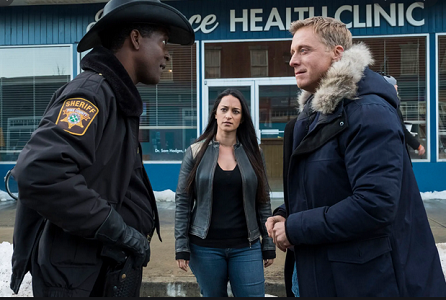