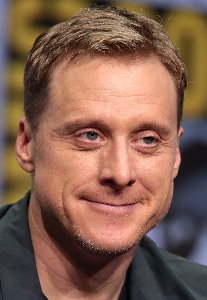 This is a fun animated show. Tudyk does a great take on this kinder, gentler Satan.  It was very nice to speak with him! It was only four minutes – part of a longer interview I did with him. He’s one of the few people to have two shows on Syfy at the same time!

Here is the audio version of it, or you can hear the entire interview here.

Suzanne: Hi, Alan, how are you?

Alan: Hey, how you doing?

Suzanne: I’m a huge. I’m a huge fan of yours ever since Firefly.

Alan: Thank you very much.

Suzanne: They wanted me to [ask you about] “Devil May Care.”

Alan: Devil May Care. It’s on the TZGZ Syfy midnight animation block. I don’t know what TZGZ stands for.

Suzanne: I don’t either.

Alan: Has anybody has told anybody? I think it just sounds good together, and it’s for some reason memorable. I’m the devil –

Suzanne: Was it fun developing the voice for the devil?

Alan: Yeah, you know, he’s similar to a character I played in Knocked Up for a head of an Entertainment Tonight or Weekly type executive or something like that, which seems appropriate. [laughs] “Come on, be a team leader! “That’s the way the devil is different in this show.

Alan: He’s not evil – not sounding, and not even in the way he goes about running Hell. He’s trying to gentrify Hell. He wants it to be a place where you can go and have a good time. He just happens to be the angel that got put in charge of Hell is the thing.

Suzanne: How many total episodes are there for Devil May Care?

Alan: [laughs] I think it’s eight. Yeah, eight ten, but only like fifteen-minute episodes. It’s got like an Adult Swim type feel to the shows…It’s crazy.

Suzanne: It was fun to recognize Louis Black in the first episode. Are there a lot of recognizable guest star voices in the other episodes?

Alan: Yes, there’s somebody else that I was stoked that we got, but I didn’t know that we got Louis until I saw the episode, because, again, this was all very pandemic in the way we recorded it. So, you can you can record whole things and never meet another person. You’re able to talk and meet and handshake, but it’s just that we haven’t been able to do [that]. I don’t know. I don’t have a list of who all is in the show, but yeah, Louis Black is a cool cat.

Suzanne: You do a lot of animated shows, do you have to turn down a lot of them, because you get so much animated voice work?

Alan: Yeah, I guess I’m choosy in my animated work. They’re pretty easy to do, as far as the time commitment and things like that, but, yeah, it kind of feels like when you’re spoiled. [laughs] I love tacos, and then you move to a neighborhood that has the best taco place and [someone’s] like, “You want a taco?” “From where?” I’m at the “from where?” place. “Who’s making the taco. What are the fixins?”

Suzanne: Thank you so much!

NEW YORK, NY – June 15, 2020 – SYFY today announced new original projects for its late-night adult animation block, TZGZ, including a new original animated series and three original pilots. Airing on SYFY every Saturday at midnight-ish, TZGZ is a 90-minute block of adult comedic, animated, genre-based programming of varying lengths. Since its 2019 debut, TZGZ has grown +7% in the 18-49 demo vs prior year, and continues to bring younger viewers to the network.*

DEVIL MAY CARE, TZGZ’s second internally developed pilot greenlit to series, has earned a 7-episode series pickup. For the series, the Devil (Alan Tudyk, SYFY’s “Resident Alien”) hires a social media coordinator (Asif Ali, “BoJack Horseman”) to rebrand Hell as the ultimate place to live, and the two form the most unlikely of friendships. Recurring roles are played by Fred Tatasciore, Pamela Adlon and Stephanie Beatriz. 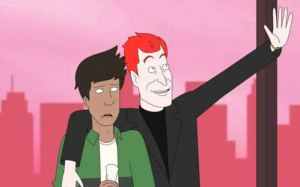