This was a fun interview with this actress. I was happy to speak with her, since she was in “The Young and The Restless” and is also in this upcoming “Star Trek” series. I have my fingers crossed that it will develop into a series or movie! Right now it’s just a pilot. Besides these two projects, she’s been a Broadway star and has an amazing singing voice. She was also on season 14 of “American Idol!” Visit her YouTube page.

I apologize that I mistakenly thought that Nichelle Nichols had passed away. That’s what I get for not sticking to my original questions! I was thinking of another actress that had recently passed away and was mixed up because Nichols has dementia. How embarrassing…. Glad she’s still with us! I’m also going to apologize for how late this is. We’ve been swamped lately with interviews, and since this show isn’t actually out anywhere yet, I had to prioritize. I’m hopeful that we’ll get the transcript soon!

Here is the audio version of it.

Set in the near future, Renegades: Ominara is a backdoor pilot/proof of concept, where technology is abundant, space travel is an everyday occurrence, and alien humanoids live among us.

AN ENTREPRENEURIAL PROFESSOR, NAMED STEINER, WANTS TO TAKE TECHNOLOGY TO THE NEXT STAGE OF EVOLUTION – THE MIND. HE HAS DEVELOPED A CHIP THAT WHEN IMPLANTED INTO THE BRAIN WOULD BE ABLE TO CONNECT WITH OTHER “CHIPPED” INDIVIDUALS. THUS ENABLING THE SHARING OF INFORMATION AND THE ABILITY TO COMMUNICATE BOTH SILENTLY AND INSTANTANEOUSLY.

HE REQUIRED TEST SUBJECTS, HOWEVER. SPECIMENS THAT MATCHED THE NEURAL WAVE OUTPUT NEEDED TO APTLY TEST HIS TECHNOLOGY. SUCH TESTING HAD TO BE KEPT SECRET, SO STEINER WAS FORCED TO PICK THROUGH THE DREGS OF SOCIETY AND YET HE WAS LUCKY ENOUGH TO COME ACROSS TWO PEOPLE THAT MATCHED HIS NEEDS PERFECTLY. IF HE WAS SUCCESSFUL, NOT ONLY WOULD HIS ALREADY APT FORTUNE QUADRUPLE, BUT HE WOULD HAVE ACCESS TO THE MINDS OF MILLIONS – UNLOCKING VALUABLE SECRETS. THAT WAS THE REAL PRIZE.
OMINARA

Ominara is a Twenty-year-old girl who has grown up on the streets due to her family disappearing when she was six years old. After escaping from the orphanage, she teamed up with two other strays – Alex and Shane.

We also meet Ominara as an older woman. Her conflict with Steiner has gone on throughout their entire lives with neither besting the other. She becomes the queen of the galactic underworld. The costume pictured here is the one she will wear as a starship captain – an homage to the Mirror, Mirror episode.
Ominara Concept Art vs. Finalized Costume with Star Loren Lott

Steiner is a man with the ultimate plan. Gaining power not only through wealth and success but by establishing a backdoor into people’s minds. He will be able to extract secrets that can be used in a variety of ways.

We also meet Steiner as an older man. Ominara has become his white whale. His pursuit has cost him dearly over the years to the point of obsession. Yet she continues to elude him. She has gained power in her own right.

Shane is the youngest of the group, at a mere fifteen years old. Her parents’ deaths were the cause of a car crash that Shane miraculously solely survived. Custody was awarded to her aunt and uncle, but after being abused, she fled to the streets where she met Alex and Ominara.

They instantly became her new family, and she is quick to show them affection. They taught her everything they know about living on the streets, but Shane still likes to be a kid at times, which sometimes gets them into more trouble than usual.
ALEX T’LORN

Alex is a no-nonsense teenager. She’s lived on the streets as long as she could remember. Her mother told her to wait outside of a convenience store and just never came back out. Apparently, she fled through a rear entrance. Essentially Leaving Alex not only homeless but with abandonment issues.

She met and teamed up with Ominara to do quick cons in order to get money for food. Eventually, they took on Shane as a third sister. Once on board their own ship, Alex takes on the second-in-command role.

Adult Ominara will be played by Nichelle Nichols (Star Trek’s Uhura). This will mark Nichelle’s final performance before heading into retirement.

Prof. Steiner will be played by Walter Koenig(Star Trek’s Chekov). He will play alongside Nichelle for her final scene.

His younger version will be played by Johnny Jay Lee of Station 19 and NCIS: Los Angeles.

Shane is played by Chalet Lizette Brannan of the upcoming peter Pan, land of forever.

The costume pictured is for her position on the ship, keeping with the mirror, mirror homage. We are considering a possible alien look as well.

The costume pictured here is for her position on the ship, keeping with the mirror, mirror homage. We are considering a possible alien look as well.

Reza is the current leader of the underworld. Dolling out jobs and making certain no one undermines his command, Reza is ruthless, but not heartless. After discovering Ominara and her friends, he took them under his wing and taught her how to make crime pay. Little does he know that Ominara’s ambition is to take his throne.

From Star Trek: Voyager to Spaceballs to the newest season of American Horror Story and Supergirl, Tim Russ is no stranger to the screen. After directing Star Trek: Renegades and Renegades: TheRequiem, he steps back into the director’s chair for this new installment featuring Nichelle Nichols in her final performance.

Tobias is a well-respected member of the film and sci-fi community specifically. Ranging from completing the effects on Renegades to Blade of Honor to Nobility, Tobias and his team are top-notch talents who know how to deliver cinematic excitement.

This project will be Nichelle Nichols final performance before retirement. She will be acting alongside long-time friend and fellow star trek star, Walter Koenig (Chekov).

Nichelle was an innovator in aerospace recruitment, working with NASA for years to recruit women as well as people of color for Nasa’s space programs, including Mae Jemison.

This project is an homage to her previous work.

Renegades: Ominara will mark the third installment in the Renegades saga. It will also be a reimagining of the world with new characters, a new crew, and new villains.

With almost 10 million views, Renegades has garnered a tremendous fan base and we’re excited to bring them the next installment.

Contribute to their Kickstarter Page to see the short film 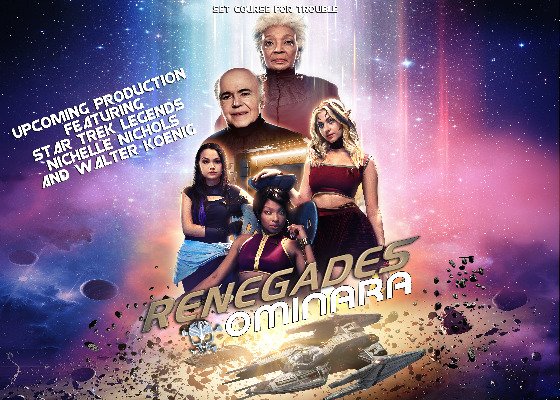